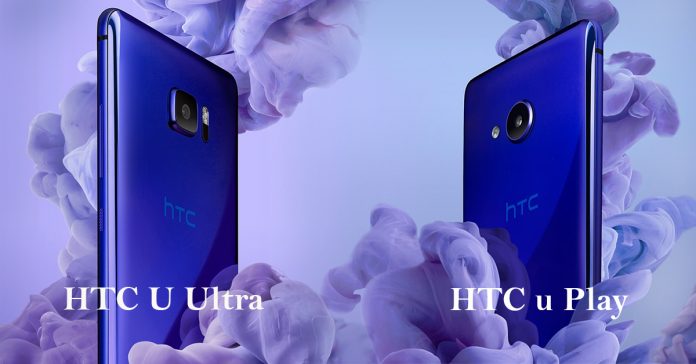 HTC launched two new phones today as the company declared its new U series of phones– where U means you!

The first phone HTC U Ultra is a flagship phone from HTC and comes with all the flagship specs you can expect. And, the second phone is named HTC U Play, which is a mid-range phone.

The new U series is quite unique in design because their whole body is made of glass, yes even the back. HTC calls it “Liquid Surface construction”. The phone looks glossy with this new material that mimics and looks like liquid. This liquid looking design makes the exterior little slippery so you might need a case to hold it firmly.

Additionally, HTC also brings its new AI called Sense Companion in the U series. Sense Companion is a voice-controlled intelligence from HTC, much like the Google Assistant, S Voice, Siri. The Sense Companion is will respond to your commands. And, will also learn your behavior and interests to make your phone more personalized i.e more U.

Moreover, HTC’s U series has always-on voice detection, which allows Sense Companion to interact with you even when the is display off. You can also use voice-based bio-metric authentication to unlock the phone.

However, the HTC U Ultra and HTC U Play doesn’t have 3.5 mm headphone jack. To compensate for that, the phones will come with USonic earphones.

Specifications of HTC U Ultra:

HTC U Ultra features a dual display. The primary display is 5.7-inch Super LCD with QHD (1440×2560 pixels) resolution and sports Gorilla Glass 5 protection. While the secondary display is 2-inch with 1040x 2560 pixels resolution and has sapphire glass protection. Similarly, the phone is powered by a 2.15GHz quad-core Qualcomm Snapdragon 821 SoC with 4GB of RAM. The phone will be available in 64GB or 128GB storage capacity which can be expanded up to 2 TB via microSD card. Additionally, HTC U Ultra has finger-print sensor on its Home Button.

Talking about the camera, HTC U Ultra sports 12-UltraPixel rear camera with a BSI sensor, laser + phase detection auto-focus, optical image stabilization, an f/2.8 aperture, and dual-tone LED flash. The front camera is 16-megapixel with an UltraPixel mode, and a BSI sensor. The phone will have USB 3.1 Type-C connectivity. Likewise, it is powered by a 3000mAh battery with Quick Charge 3.0 support. It’s rated to deliver up to 26 hours of talk-time and up to 13 days of standby time.

Specifications of HTC U Play:

HTC U Play sports a 5.2-inch full-HD (1080×1920 pixels) Super LCD display with Gorilla Glass. It is powered by an octa-core MediaTek Helio P10 SoC. The phone comes in two storage options: 3GB  RAM with 32 GB inbuilt-storage and 4GB  RAM with 64 GB inbuilt-storage. The storage is expandable via microSD card (up to 2TB). It features USB 2.0 Type-C connectivity and bears a fingerprint sensor on the Home Button.

Looking at the camera, the rear 16-megapixel camera comes with a BSI sensor, optical image stabilization, PDAF, an f/2.0 aperture, and dual-tone LED flash. While, the front camera sports a 16-megapixel sensor with an UltraPixel mode, a BSI sensor, an f/2.0 aperture with a 28mm focal length. It is powered by a 2500mAh battery with fast charging support (5V/2A). The battery will deliver up to 15.21 hours of talk-time and up to 427.54 hours of standby time.

HTC U Ultra is available for pre-sale at $749 from HTC.com. HTC will start delivering HTC U Ultra in Taiwan by the end of January. However, the rest of the world will have to wait till March for the phone.

On the other hand, HTC U Play will be available late in Q1 2017. The price of the U Play is not revealed yet.