Home Huawei Huawei announces new line of phones, and there’s something for all! 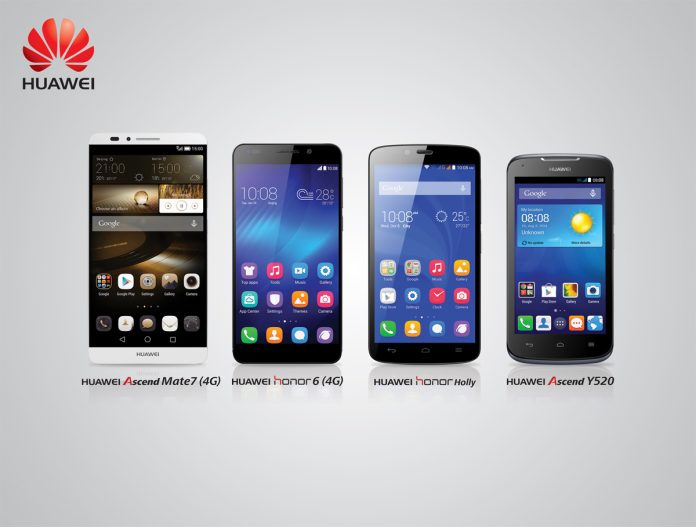 Huawei, a leading global Information and Communications Technology (ICT) solutions provider, today launched this year’s most anticipated smartphone, Huawei Honor Holly, Honor 6 along with Ascend Mate 7, and Ascend Y520 in Nepal. Huawei aims to provide something for all with its new line of smartphones:

The Huawei Honor Holly runs Android 4.4.2 KitKat that features a bunch of new features at an attractive budget price that will hopefully allure new smartphone buyers to this market.

But don’t you underestimate it on its price! This smartphone has features that match to a mid-range smartphone with a decent build and battery life. The key features include:

Huawei Ascend Y520 is yet another phone at a very low price. The Y520 is powered by a 1.2GHz dual core processor and is paired up with 512MB of RAM. At the back it has a 5MP camera and it comes with a micro SD card slot and 4GB of internal memory. Everything is powered by a 1730mAh battery. The handset runs under Android 4.4 KitKat with a 4.5 inch LCD display with a resolution of 480×854 pixels.

Likewise, Huawei Honor 6 is equipped with fastest processors and a high-end spec configuration for all of you performance lovers! With features like 3GB of RAM and Octa-Core processors, this should be strong enough to fulfill your performance needs. Its features include: Huawei Ascend Mate 7 from the Ascend series brings you the best: a huge 6” FHD screen on an ultra-slim metal body powered by a super 1.8 Ghz Octa core Kirin chipset, and other features for sheer performance and power. Huawei Mate 7 also boasts of its finger print sensor conveniently located at the back side of the phone which can be used to unlock the phone in just one touch. The sensor also recognizes your fingerprint, awakening instantly without the need to unlock or press any other buttons and adding biometric security for your smartphone. Its top features include:

Huawei is one of the leading smartphone vendor and leading telecommunication solution provider in the world. Huawei has always relentlessly committed themselves to develop premium quality smartphones over the years because of which they have been recently listed in top 100 Global Innovators and top 100 interbrand Best global brands in 2014.

We’ll soon be with you with reviews of these gadgets to let you know how these phones behave for real!

How do you think of these releases? Are you enticed to buy one?

Let us know in the comments below.