Home Huawei Huawei donates rapid system to the ministry of information & communication as...

As the world’s largest providers of telecommunication & networking equipments and one of the leading smartphones makers, Huawei is a Chinese company that has created a different level of niche market for itself around the world including NEPAL within a very short span of time through its world-class products and services in Telecommunication and smartphone Industry. The earthquake in Nepal on April 25 has not only shaken the whole nation, but also claimed many human casualties. Worse still, the situation can become even graver if the information cannot be properly communicated during  crucial times such as these. That is why Huawei, as a responsible company, has donated Rapid System ( Huawei Emergency System) equipments worth US$ 600,000 on 12 June, 2015 as a part of its earthquake relief program and hopes that this will bring some solace and a certain level of relief to the people of Nepal at these times of disaster. 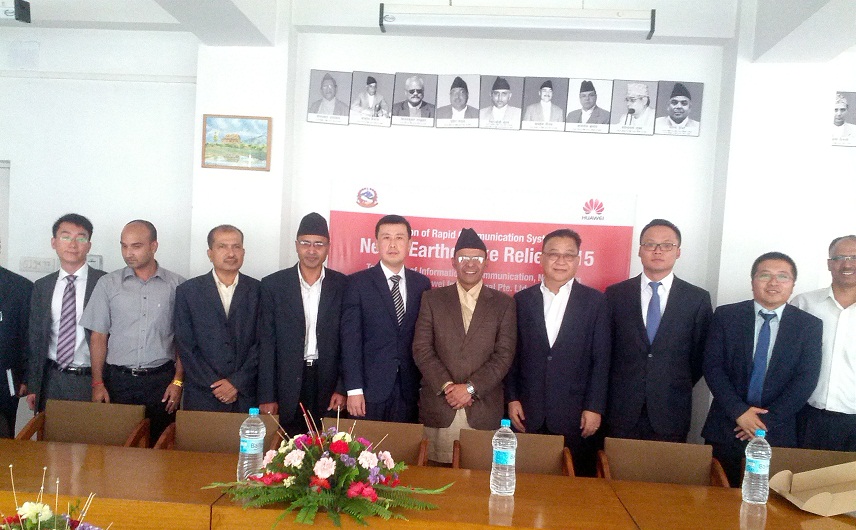 The donation program started at 11:30 a.m. in the presence of Hon. Minister of Information and Communication, Minendra Rijal. Also, this program was participated by key personnel from MOIC; Huawei’s Mr. Bob Zhu, Director- Strategic Initiatives from Region along with some personnel from Huawei company and  media reporters. Mr. Bob Zhu from Huawei handed over the equipment to Hon. Minister Rijal amidst the media at MOIC today.
As per the company, the donated Rapid System will help to a great extent making the whole information & communication system and its medium simple and easy. The Rapid System is expected to play an important role when it comes to providing a methodical security system and its adjustments to the general public.