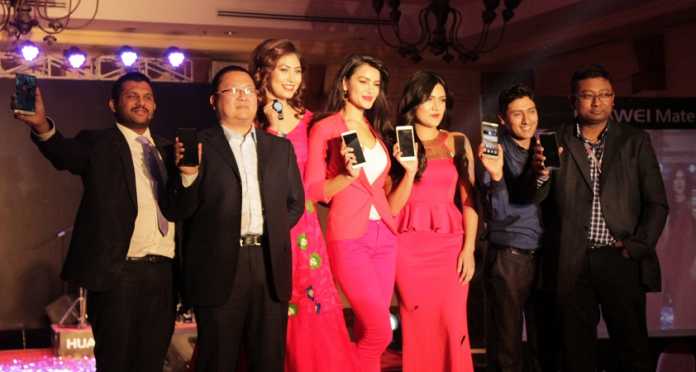 Huawei Smartphones along with its local distributor Call Mobility has officially unveiled two smartphones in Nepal– Huawei Mate 8 and Huawei GR5. While the Mate 8 is high-end offering priced at Rs.79,999, the GR5, on the other hand, is priced at Rs.33,999 and is targeted for youths.

The Huawei Mate 8 features top of the line specs and goes in head to head with flagships such as iPhone 6s Plus and Galaxy S7. It has a 6-inch FullHD IPS LCD display with a pixel density of 367 ppi and a stupendous screen-to-body ratio of 83%. The display panel covers 95% of NTSC gamut providing excellent colour reproduction and is covered by 2.5D curved diamond-cut glass. The phone is powered by a Huawei’s in-house Kirin 950CPU with an octa-core processor (4x Cortex A53 + 4x Cortex A72). Similar to Apple’s A8 SoC, Kirin 950 also have an i5 intelligent coprocessor that supports speech recognition, low-power consumption MP3, all the functions of a sensor hub, fused location provider (FLP) navigation, and reduces location-based power consumption.

In terms of memory, the Huawei Mate 8 comes with 4GB of LPDDR4 RAM and 64GB of onboard storage, that can be further expanded via a microSD card slot upto 128GB. Other specs include a dual hybrid SIM slot with 4G support, a 16-megapixel Sony IMX298 camera with F/2.0 aperture lens, OIS, and dual tone LED flash, an 8-megapixel front camera, Android Marshmallow 6.0 with EMUI 4.0 and a 4000mAh non-removable battery.

The Huawei Mate 8 has a full metal body that built from aerospace-grade aluminum. The fingerprint sensor is located on the back and the phone is available in Champagne Gold.

Huawei GR5 is company’s latest midrange offering that comes with great specs for its price. It features a 5.5-inch FULLHD IPS LCD display, is powered by a Qualcomm Snapdragon 616 CPU(1.7Ghz quad core Cortex A53+ 1.2Ghz quad core Cortex A53). In terms of storage, the Huawei GR5 has 16GB of inbuilt storage with a provision of microSD card expansion slot that is upgraded upto 64GB.

The Huawei GR5 comes in a 0.8mm aluminum uni-body and feels premium for its price. It has a 13MP rear shooter with smart image 3.0 image processor and a 5MP snapper up front with f/2.2 aperture, 22mm wide-angle, 4P Lens, Blue Glass filter and an 88 degrees wide angle lens. The back is non-removable and inside there is a 3000mAh battery which supports quick charging 3.0. It also sport a fingerprint sensor on the back that can unlock the phone in just 0.5 seconds. The fingerprint can also be used to accepts calls, silence alarm, shows and clear notification, and take photos.

In terms of connectivity, the Huawei GR5 offers dual SIM slot with 4G capabilities (micro sim+nano sim), Wi-Fi 802.11 b/g/n, Bluetooth 4.1, GPS, and MicroUSB 2.0. The phone is currently running on Android 5.1 Lollipop with Emotion UI 3.1 on top, but according to recent rumors the Marshmallow update is also on works.