Huawei seems to be pushing itself on making more premium phones these days as competition is getting tough on the high-end market. This year Huawei has raised the bar even higher with the launch of the new P8 smartphone. The P-series targets the higher-end market through more robust and premium build quality, but can it compete with the likes of galaxy S6 and other high-end phones? Let’s find out on our review.

Huawei P8 is priced at Rs.60,000, but you can easily get it for around Rs.58,000 in markets. This is indeed the cheapest Flagship smartphone compared to other high end phones that are currently available in Nepal. The Samsung Galaxy S6 is priced at Rs.77,900 while the iPhone 6 is priced at Rs.82,199.

The first impression you’ll have of this phone is when you hold it in your hands. Picking up this phone will give you that premium feel right enough to assure where you’re pouring all that money into.  the phone is really light. It weighs around just 144g and it’s also one of the thinnest phones you’ll find right now with a thickness of just 6.4 mm which makes it thinner than the iPhone 6 and the Samsung galaxy s6. Despite being a 5.2inch device, it is easily manageable with one hand;  big thanks to it’s thin side bezels. Besides the slim bezels, the slightly curved, chamfered edges add more beauty to this phone. Having curved edges and well polished back, this phone is quite slippery to hold. I really had a hard time getting a grip on this phone, a curved back might have helped here. The flat design of this phone makes it look different than other flagships. Huawei could have done a little bit more on the design aspect. But still no doubt the P8 looks absolutely amazing.

On top, we’ve got 8MP Front Facing Camera, led notification, speaker grill and also the sensors. On the left, we’ve got this clean chamfered edges and on the top we’ve got the standard headphone jack and a noise canceling microphone. 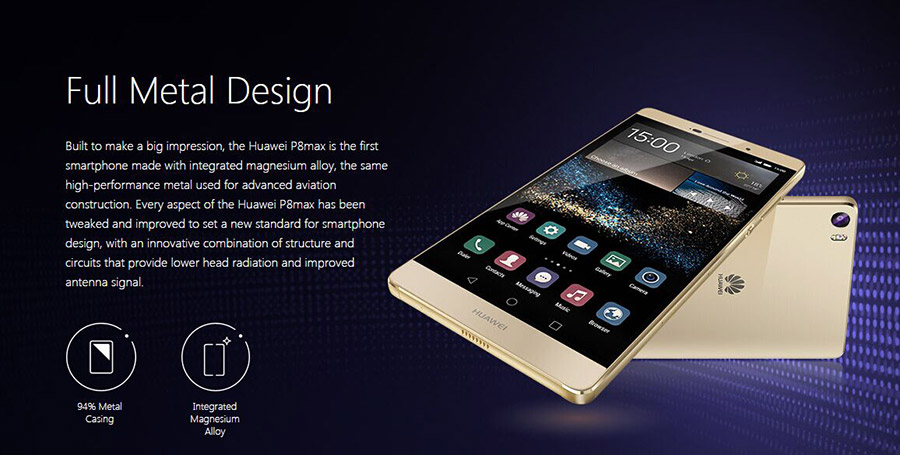 On the right, we’ve got the volume rockers and power button made out of metal which are really tactile and responsive. these buttons are well placed, so you won’t have any difficulty reaching it. Also, you have the trays for micro sd card and nano sim. And it’s a dual sim phone, and you don’t see much of the flagships with dual sims. On the bottom, we have the dual speakers like any other flagships today and the micro USB port. On the back, we’ve got the 13MP camera with the world’s first 4-colour RGBW imaging sensor which cuts noise in low light conditions by 78% while providing 32% higher brightness and contrast levels. Unlike other flagships P8 lacks the QHD screen or super AMOLED screen, but the IPS-NEO technology delivers brighter, sharper and more vivid images, as well as being more energy efficient.

The phone runs on Android Lollipop 5.0 on top of Huawei’s own Emotion UI 3.1, which will get an update to 5.0.2. Like phones from other Chinese manufacturers, you get no app drawer, everything is on the home screen. It might take a little bit of time to get used to it, managing apps in folders really help you move through the UI efficiently. We’ve also got the semi-transparent notification drawer with some shortcuts and the notification sections on the left which is quite managed with the timeline. The UI doesn’t have a lot of tweaks like the MIUI but still it has got a bunch of little handy features. Like swiping down anywhere on the home screen gives you a search bar where you can search for apps, contacts, and messages. You can double tap from our knuckle to take a screenshot or just draw a circle from the knuckle in a clockwise direction to take a screen shot of the desired area. You also get a built-in network speed indicator. Also, you get the option to manage color temperature. You also get a built-in system optimizer app from which you can clean the junk files or cache files, change the devices power plan (like performance, smart, ultra), you can also check which are the power intensive app on your phone and modify its permissions to save battery. You can also check the battery consumption level of each app including the system apps. You get a call and SMS blocker as well. You can also change the theme of this device which affects your icons, fonts, wallpapers, and animations. There are seven themes to choose from and apart from that you can’t add any more themes, but you get the option to mix different aspects of each themes. You also get to choose the simple UI if you want a simpler experience with the handset and for better battery life. You get a bunch of tools you can have fun with like the magnification app and the mirror app. Like google now, Huawei has its own voice assistance named Amy, which can be triggered by using the hot word “okay emy”, you can also change the hot word to your liking. Also, you can customize the navigation bar to some extent like swapping the position of navigation buttons. For those of you who find this phone huge and difficult to use, you can just swipe on the navigation bar on either left or right to trigger the one-handed mode. This is a really neat feature which was well thought of. Also, you get a lot of features if you explore into the settings menu.

Under the hood, the Huawei P8 rocks its own HiSilicon Kirin 930 chipset that comprises of 4 Cortex-A53 processors clocked at 2.0 GHz and another 4 at 1.5 GHz. It has 3GB of RAM and Mali-T628 MP4 for high-end gaming and multitasking. Talking about multitasking, it’s a breeze to multitask on this device. You can open a bunch of apps and navigate around them without any stutter or lag.

One area where the phone suffers is while playing high-end games. The Mali-T628 MP4 GPU on the P8 is less powerful than other high-end GPUs like Adreno 450 (Oneplus 2) and Mali-T760MP8 (Samsung Galaxy S6 / Note5). Playing high-end games at high settings works fine, but the problem is it tends to get hot after a while. Overall, it has an admirable performance compared to other flagships, but Huawei still needs to improve in this area to be more competitive.

It’s on the camera that Huawei has undoubtedly focused most of its attention on the P8.  Camera interface resembles a lot to the iPhone’s camera UI, but Huawei has put some of its own unique touches to it. Huawei has worked a lot on the P8s camera and it has significantly one of the best cameras out there. The 13MP rear camera sensor can’t match the Galaxy S6 or One M9 for resolution, but Huawei claims the camera comes with the world’s first 4-colour RGBW imaging sensor which cuts noise in low light conditions by 78% while providing 32% higher brightness and contrast levels. You get really sharp and vivid images with its camera. It also holds the best in class OIS (optical image stabilization) and a DSLR quality ISP (image signal processor). What does this all mean? A number of things actually, including enhanced low-light performance, brighter, more natural colors and a better auto mode which can adjust the settings accordingly to give you the best shot. You get numerous amount of camera options which you can play with. The best one is probably the light painting and the super night mode. Light painting gives you the long exposure shots of car trails or lines of light. You can really get creative with this camera. Also, in low light, it performs pretty well. Images get a bit noisy but still it’s better than images from other flagships.

Despite all the hype on Huawei’s camera, we still think there are more things that it could have offered but let don’t let that put you off it’s still a great snapper and you get pretty excellent shots with it.  Check out the Camera Samples of Huawei P8.

This phone packs a Non-removable Li-Po 2680 mAh battery which can last you for two days on moderate usage and a full day on heavy usage. While gaming or other heavy tasks, you get 4 hours of screen on time.

Huawei has put a lot of effort on the P8 as far as power management is concerned. With Ultra Power Saving mode and different power saving features, you will be able to improve your battery performance considerably. The only cons in the battery department is a lack of turbocharging so you’ll have to wait for about 2.5 to 3 hours to juice up completely.

Huawei is a rare flagship device to come with Dual SIM support, however, the second slot should either be used as MicroSD or Nano SIM. The P8 is also equipped with Cat. 6 LTE with download speed exceeding 300mbps.

In terms of Wi-Fi, the phone supports Dual-band Wi-Fi 802.11 a/b/g/n, however, there is no Wi-Fi ac. Call quality is excellent on Huawei P8 thanks to its Dual Antenna technology that makes the call reception class above its competitors. Other connectivity includes Bluetooth 4.1, GPS/GLONASS, FM radio, and NFC.

Huawei has significantly improved on its flagship segment. The P8 has a lot to offer including a great build, great design, awesome camera performance and a decent battery life. There are merely few things you can complain about this device which includes casual heating issue while playing games thanks to its iffy chipset as well as lack of Quad HD display which could be a major setback for users looking to buy a smartphone at this price range.