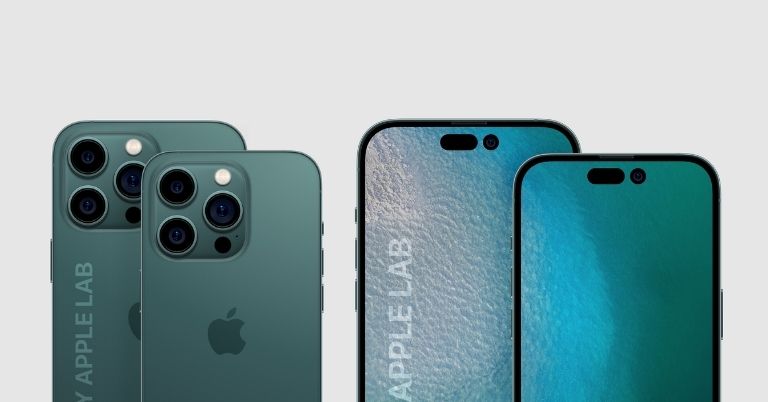 Apple is likely to release the new iPhone 14 lineup in September like in previous years. With the release dates closing in, leaks have started pouring in heavily. The most recent leaks of the iPhone 14 series consist of schematics for the Pro and Pro Max that highlight some major design changes.

A prominent leaker named Max Weinbach shared the alleged schematics for the upcoming iPhone 14 Pro and iPhone 14 Pro Max on Twitter recently. The leaks reveal that the notch will be replaced by a dual punch “hole + pill design.” The new hole punch seemingly represents a horizontal “i” standing for “iPhone.”

Weinbach also leaked the dimensions alongside these design changes. At 7.85mm, the iPhone 14 Pro Max will be slightly thicker than the 13 Pro Max. Besides, it will feature a bigger rear camera module with a protrusion of 4.17mm. On the other hand, the non-Max Pro model will not see a major change in its dimensions.

Ukrainian concept creator Konstantin Konovalov (aaple_lab) took the rumors and leaked iPhone 14 CAD files and made them into beautiful renders. These realistic renders line up perfectly with Max Weinbach’s leaked schematics. Konovalov’s renders show realistic versions of the new “i” notch and camera bump. All these design leaks seem quite convincing.

Another leaker, Jon Prosser, has revealed that Apple is bringing a new “Max” iPhone to replace the mini model.

Rumors have also suggested that the iPhone 14 series will differentiate the Pro and non-Pro models than ever before. There have been reports that Apple will only be using the next-gen A16 Bionic for the Pro models. The two high-end models will also receive a new Vapor Chamber cooling setup.

On the contrary, iPhone 14 and 14 Max will be stuck on the A15 Bionic. This is said to be the result of TSMC’s inability to produce enough A16 chips. That being said, the two non-Pro models are getting RAM increment. This should put them on par with the iPhone 13 Pro and 13 Pro Max in terms of performance.

Moving on, the vanilla iPhone 14 will have the same-old design with the “bathtub” notch. Many leakers are certain about Apple replacing the lightning port with USB-C. However, Prosser does not think so.

As of now, no official news about the upcoming iPhone series has come from Apple itself. All the leaks and rumors come from independent leakers and enthusiasts.