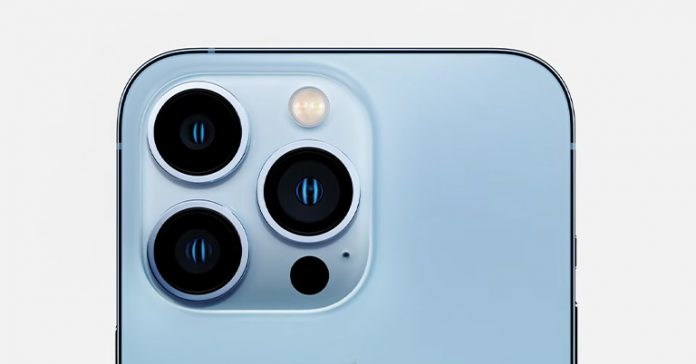 Starting with the display, the iPhone 13 Pro boasts a 6.1‑inch OLED panel with 2532 x 1170 pixel resolution and 460PPI pixel density. The highlight of this year’s Pro iPhones is the 120Hz ProMotion support. Under this, the 13 Pro implements an LTPO backplane that can dynamically switch the display’s refresh rate between 10 and 120Hz. Additionally, this screen sports 1000 nits of max typical brightness while it can reach up to 1200 nits during HDR playback. It is covered with an oleophobic coating that wards off fingerprints and smudges as well. In addition, the phone is IP68 rated for water and dust resistance.

In terms of design, it’s practically the same as last year’s iPhone 12 Pro with its stainless steel case and matte glass back. However, the notch is 20% narrower this time around. Furthermore, it weighs 204 grams and is 7.65 thick. iPhone 13 Pro is available in four color options: Graphite, Gold, Silver, and Sierra Blue.

Getting to the performance, it packs the new A15 Bionic chipset. Manufactured under the 5nm process node, it features a 6-core CPU, a 5-core GPU, and 16-core Neural Engine. Here, Apple promises that the new GPU architecture delivers 50% better graphics performance than the competition. Memory-wise, it’s available with up to 1TB of internal storage.

As for the optics, all three rear cameras get 12MP sensors as last year. However, it has an f/2.8 telephoto, an f/1.5 wide, and an f/1.8 ultra-wide lens. The primary wide camera now lets in 2.2x more light than the iPhone 12 Pro and is the largest sensor in an iPhone yet.

Aside from this, the Pro models this year gets the new Cinematic Mode that seamlessly shifts focus from one subject to another, artfully blurring the background and creating cinema-quality depth effects. To note, this mode shoots in Dolby Vision HDR. In addition, you can now shoot macro shots via the ultra-wide lens.

The iPhone 13 Pro utilizes Wi-Fi 6 and Bluetooth 5.0 for wireless connectivity. In terms of battery, it features a 3,095mAh cell with 20W fast charging. It also supports 15W MagSafe wireless charging.

The iPhone 13 Pro starts at a price of Rs. 174,990 in Nepal. However, other memory configurations are now a little expensive in Nepal because of the increase in Government Taxes.

Meanwhile, check out our unboxing and review of the iPhone 13 Pro: