In this review, I’ll be discussing the JBL Quantum 50 gaming earphone at length. While wireless earbuds have taken the audio accessory market by storm, the standard 3.5mm earphones still hold a dear place in many people’s hearts.

And no, it’s not just a nostalgia thing—not by a long shot. From their high-bandwidth, zero-latency performance to battery independence, there’s a lot of reasons to get a wired earphone, even in 2021. Granted you might have to use a dongle to enjoy these perks, but still.

Starting with the design itself, you could probably already tell that universal fit isn’t what the engineers at JBL had in mind when building this pair of earphones. Its fairly chunky form factor could be an easy dealbreaker for many—especially those with small ears. Still, for a comfortable wearing experience, the earbuds themselves have this arced layout for something the company calls “Twistlock” technology. What this means is that for the optimal fit, JBL says you ought to twist the earbuds into your ears a little. Quantum 50 arrives with the standard small, medium, and large-sized silicone eartips—with the medium option pre-installed.

When putting it on, I felt a mild pressure build-up around my ears which ultimately resulted in wearing discomfort after about an hour or so. As a result, I tried switching things up and ultimately ended up settling for the small ones. With this, I must say that the aforementioned nuisance dropped to a more acceptable level.

However, its big design is still a literal pain to my ears. This big design implements an additional layer called “enhancers” between the eartips and the ear unit (driver port). Its primary function is to deliver effective passive noise isolation. Thankfully, like the eartips, its silicone build quality didn’t result in any sort of irritation around my ears.

These are removable too so I tried experimenting with it to see if the enhancers were the actual culprit behind the pain. While it certainly minimizes the discomfort from the earphone’s bulk by a great margin, it does so by introducing a couple of drawbacks of its own. First and foremost, I noticed a slight drop in the passive noise isolation level without enhancers. But the bigger issue I had with removing them is that the couple of nudges JBL has had to keep in place to secure the enhancers create this sense of uneasiness when they interact with the ear canal. They’re quite sharp as well, so the twinge would be amplified with the simplest head tilts.

Moving on, once you’ve figured out the right size eartips for your ears, the Twistlock design actually does a pretty good job of keeping the earbuds sealed in. Throughout my usage, the JBL Quantum 50 didn’t accidentally come off my ears whether I’d be walking or playing games. Even aggressive headbanging doesn’t do it.

Yet, there is an audible cable noise with these earphones upon movement. Regardless, this issue is prevalent with practically every other pair of wired earbuds. So, I can’t classify it as an exclusive disadvantage for the Quantum 50. Adjusting it with the anti-pull lever does help things a lot though.

Anyway, JBL has opted for a hybrid build material here. It has a braided cable from the lower half of the control system to the earphone jack, while the upper half gets a plastic construction instead. This results in tangle-free cord management which is great. Its 3.5mm TRRS audio jack has an angled layout—although I would’ve preferred a 90º connector instead. When handled carefully, this shouldn’t be a problem but we all know the superiority of right-angled headphone jacks.

Aside from this, you can choose from three color options for the Quantum 50: black, white, and purple. All of these flaunt a subtle accent around the JBL marking on the driver port, while the silicone eartip embodies the classic JBL orange finish.

Getting to the controls, this earphone has a dedicated control center to get through your audio, microphone, and playback monitoring. One side features a volume and microphone slider whereas the opposing end hosts a multi-function button and a JBL branding.  Interestingly, the volume control only plays around with the loudness of the earphone and not the device you’ve connected them to.

I don’t see any particular advantage from this design choice, so I’m not sure why JBL settled to this. Just think about it—you’re pushing the slider up and down worrying why the loudness isn’t up to the mark, only to find out that your phone or your laptop’s volume level hasn’t synced up with that of the earphone.

And this is exactly what happened to me multiple times. I thought Quantum 50 couldn’t get loud enough but later discovered that I had to crank up the volume level of my phone as well. Nevertheless, the mic control doesn’t follow this process (thank God) and works as intended. At the back, you have a multi-function button for music and calls which is pretty responsive.

A single-tap switches between play/pause mode, whereas a double and triple-tap skips a track or goes back to the previous one, respectively. Also, a long press can trigger notification readout on Android phones. But being able to summon a voice assistant would’ve been a more productive implementation I think. Disappointingly, this button doesn’t work with laptops.

Anyhow, what’s interesting here is that the incision in the middle of the control system includes a cable management channel. With this, you can attach either one of the earbuds securely so that it doesn’t dangle as much when having only one earbud in at a time.

Now, let’s talk about the audio quality of this thing. Before going any further, I would once again like to highlight that these are budget gaming earphones. Its “budget” pricing suggests sub-par audio quality and the “gaming” heritage means the JBL Quantum 50 prioritizes mids and highs above bass. And from my testing, I’ve found this earphone’s audio quality to be an exact combo of these two facets.

In games like PUBG, Call of Duty Mobile, and Genshin Impact, enemy movement, environmental SFX, and such sound quite crisp. Vocals come off clear and loud enough as well. Overall, I’d say it has quite balanced mids and highs. Yet, something like grenade explosion sounds (almost) completely flat because of its non-existent bass. I tried playing around with equalizer settings to see if things would improve, but no. The sound signature of the 8.6mm dynamic drivers simply isn’t tuned effectively enough to deliver punchy bass in any way.

Apart from this, its stereo performance is fairly impressive too and I must say the positional audio experience helped with my gameplay. I could pinpoint enemy firing from practically any direction under games like PUBG Mobile. Yet, the gunfire from suppressor-free shooters like M16A4 sounds a bit shrill—even under low volume.

And when testing Quantum 50’s limit in crowdier games, this earphone starts revealing its inexpensive nature. For instance, playing the “Supremacy” mode under Star Wars Battlefront II with at least 40 AI bots actively shooting things up at any given time, I struggled to locate where an enemy was shooting me from.

Not to say this earphone’s positional audio performance thoroughly gives up under such gameplay but the feedback is too weak to make accurate, instant decisions. Besides gaming, JBL Quantum 50’s regular audio quality is respectable as well—at least for my taste of music. Like I mentioned earlier, this earphone pretty much excels at mids and highs while performing quite terribly when it comes to bass.

In “Jazzy Joint” by J.A.M and José James, the vocals, piano, and cymbals sound impressively crisp and detailed while low-frequency audio from the bass guitar, drum come off completely flat. On the other hand, acoustic songs like Bob Dylan’s “Simple Twist of Fate” have good instrument separation with clear vocals. Likewise, I’m content with its microphone quality as well. 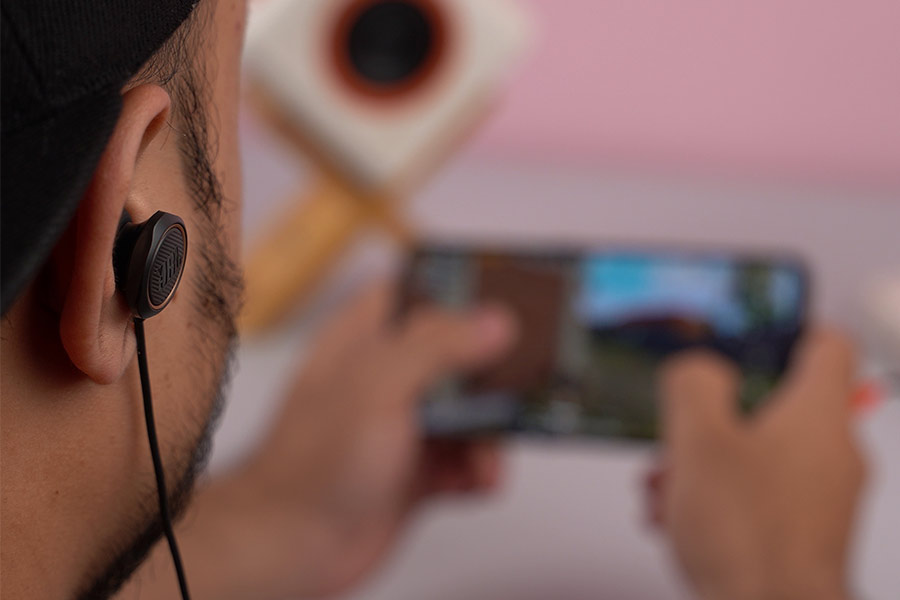 Throughout my PUBG Mobile sessions with the Quantum 50, my friends didn’t complain about my voice quality either. Here, the microphone is located separately from the control center to avoid any sort of interference. Plus, its close-to-mouth placement further helps the cause. However, if you’re gaming in a relatively rowdy room, the background noise manages to sneak in rather easily.

Overall, the JBL Quantum 50 is a decent pair of budget gaming earphones. Although, it’s not one I would pick for myself. That’s primarily because of its bulky form-factor which is uncomfortably incompatible to my ears. Also, it’s priced quite ridiculously here in Nepal which further simplifies my purchase decision. Having said that, if you have big ears and don’t care much for bass reproduction, this earphone isn’t half bad.