JBL is a big name when it comes to audio accessories, especially in the portable Bluetooth segment market. Back in 2018, the company tried to do something new by incorporating FM radio into its portable speaker. The result was the JBL Tuner FM. While it did not make it into the Nepali market, the second-generation Tuner 2 has. And I was able to get one for myself for the review. So let’s get into our review of the JBL Tuner 2.

Let’s start with the design. The JBL Tuner 2 FM has a cylindrical body that is to be placed horizontally on a flat surface. On the bottom, we have rubber padding on either side that provides some height to the speaker. However, these paddings are slim and thus, won’t make that much of a difference unless it’s placed on a completely flat surface. 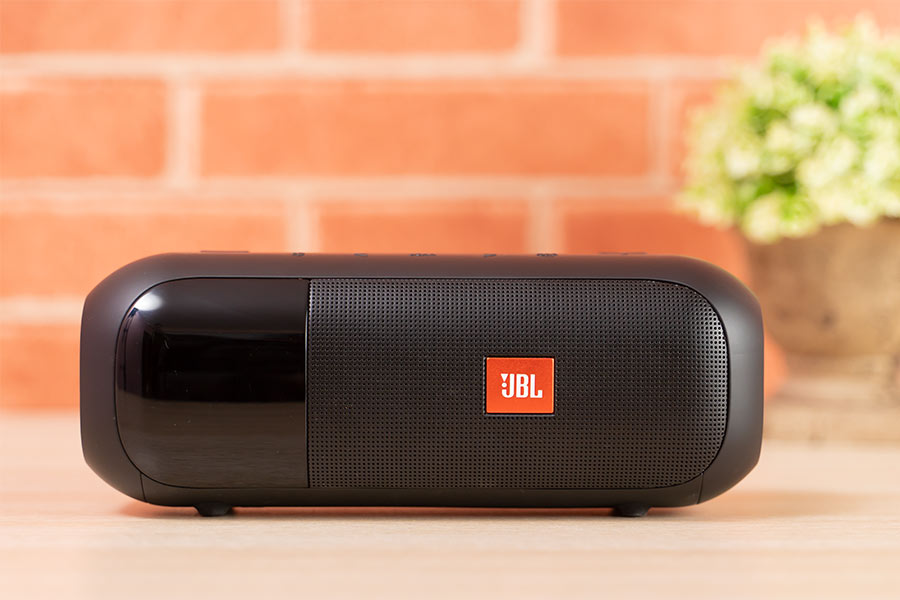 JBL Tuner 2’s body is made up of plastic that feels smooth when touched but has been given a rubberized look. It’s prone to smudges though. The speaker comes with an IPX7 rating and should survive light water splashes.

Sides are more like “glastic”. The left side also houses the power button that has a tiny red decal. The button is tiny and non-glowing but I had no problem finding it as it is pressed into the surface. On the opposite side, the JBL logo has been carved out of the smooth surface. 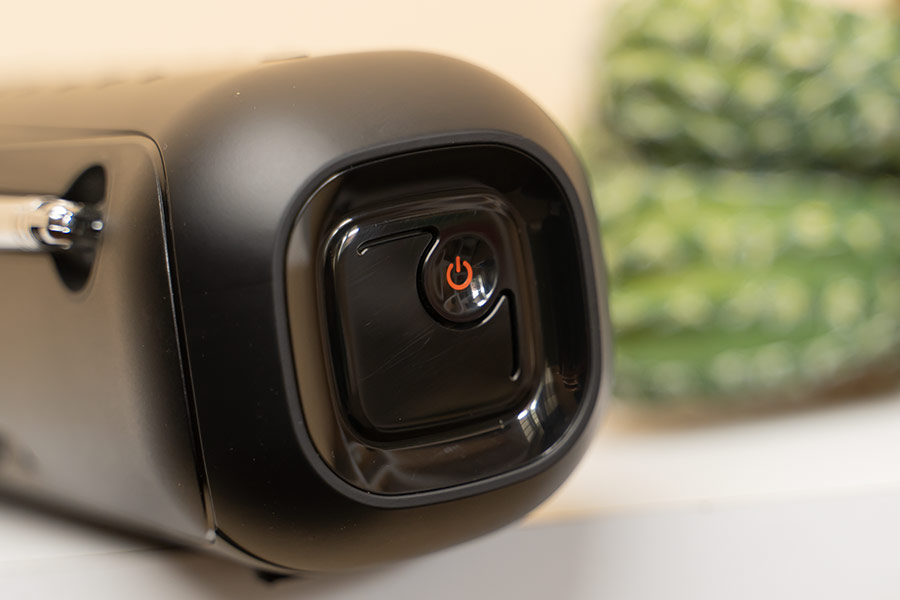 On the front, there is a massive grill covering most of the space available. The grill looks to be made up of metal and thus looks sturdy. It has the JBL logo in the middle.

Alongside the grill, JBL has included a greyscale screen at the front of the device. The reason that it’s here is that the Tuner 2 supports Digital Audio Broadcasting (more on that later). On the top right corner, the screen displays the mode (DAB/FM/Bluetooth) that it’s in. Similarly, there is the battery indicator on the top left, which unfortunately does not show the battery in percentage. And this one of the problems I had with JBL Tuner 2.

You cannot know the exact remaining juice at any given point even with a smartphone. I tried using third-party apps like BatON but that was in vain. It may not sound like a big issue but I would have liked it if the battery level would have been indicated by series of bars just like the volume. 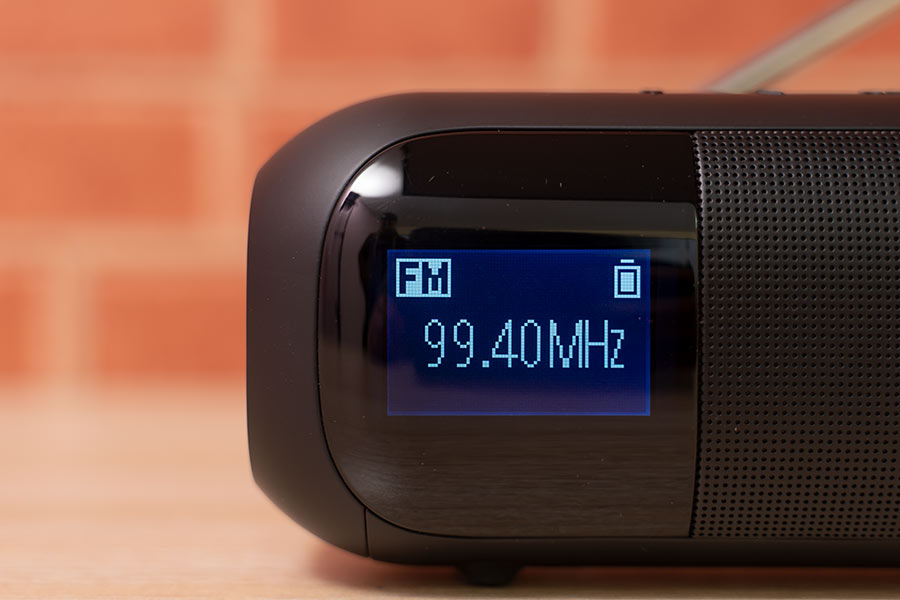 While using the FM, you can see the exact frequency that you are on and if it’s an FM that you personally saved, then you can see the preset number as well. When on Bluetooth mode, the screen tells you if the device is in pairing mode or has been connected to a device. Press the Bluetooth button on the top and the speaker will re-establish connection with the last connected device. If you want to connect it to a different device, just press the button again and the speaker will enter into pairing mode.

Talking about buttons you have plenty of them on the top surface. You get two big buttons on either side for volume up and down. Between them are the two rows of tiny buttons. The ones on the top row are numbered from 1 to 5. A long press on any of them when under FM mode will assign the button for the given frequency. And you can get back to that frequency at any time just by pressing the corresponding button.

Similarly, the scan button on the bottom row will return the next strong frequency. But you can manually tune the FM by using the two arrow buttons. There is also the DAB/FM button to switch between the two modes. Except for the volume buttons, others don’t serve any purpose in the Bluetooth mode. Also, it would have been better if the buttons were more clickable. 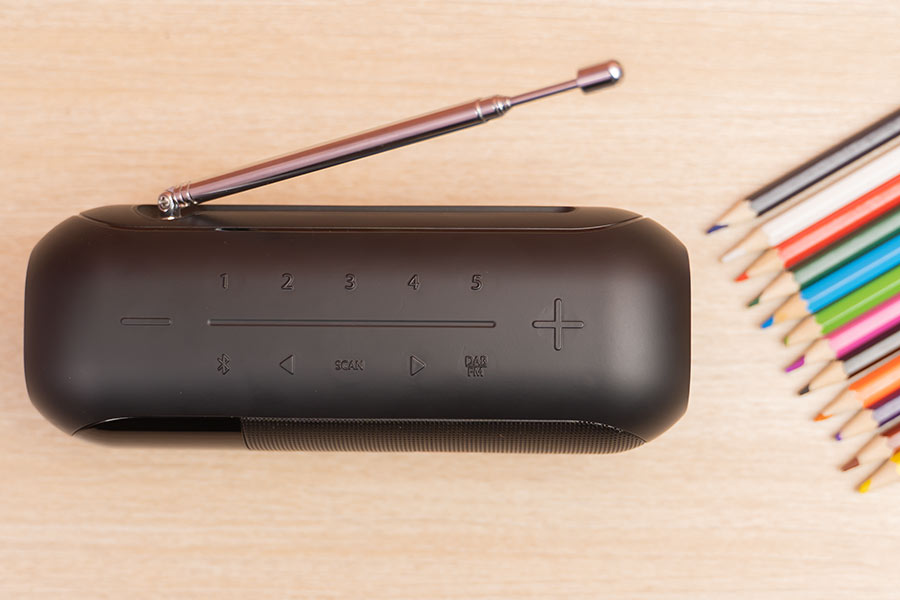 Also, if you happen to push the volume up button with the volume turned all the way up, it will pause the contents for some seconds. You will usually experience this while turning up the volume in a hurry and it is quite annoying.

One of the highlights of the JBL Tuner 2 is that it supports Digital Audio Broadcasting (DAB). Unlike FM and AM, frequencies in DAB are transmitted using digital signals. This usually results in better audio quality when compared to the traditional FMs. Similarly, it also allows the multiplexing of multiple stations in one frequency. So if you live in an area where this is supported you will be able to make use of it. Unfortunately, we do not have DAB here in Nepal and thus I was unable to test it.

As far as the regular stations go, you will have no problem as long as the signals from the stations are strong. You can certainly use the antenna to try to get the best signal. When not in use you can close it and hide it in the groove on the backside of the device.

JBL Tuner 2 As A Bluetooth Speaker

As a Bluetooth speaker, the JBL Tuner 2 isn’t anything extraordinary. As I’ve discussed throughout this review, JBL has prioritized the FM side of things over the Bluetooth speaker in Tuner 2. Still, the experience is not downright awful. Vocals are loud and clear but you notice some distortion at the highest volume. I found the audio to be on the warmer side. The bass on the other hand is just okay. You won’t have any complaints if you happen to listen to pop music. If you are more into rap and hip-hop, you will notice the lack of punchiness in the bass.

The speaker comes with Bluetooth v4.2 which is quite outdated when there are speakers that have Bluetooth 5.0 and above. I did not have much problem with the connectivity except for the few times when I had to deal with interference. It’s nothing of a deal breaker but the situation would have been much better if JBL had opted for a newer version instead of the Bluetooth. After all, it’s not that hard to get speakers with the newer Bluetooth protocol in this price range. Still, the Tuner 2 has an Aux-in port at the back for wired input as well.

With the Tuner 2, JBL is claiming battery endurance of up to 12 hours. In my experience, I was able to get around 8 hours of playback time in Bluetooth mode. This was with the volume set at maximum the whole time. For charging, this speaker supports 5V, 1.2A charging via the Type-C port. 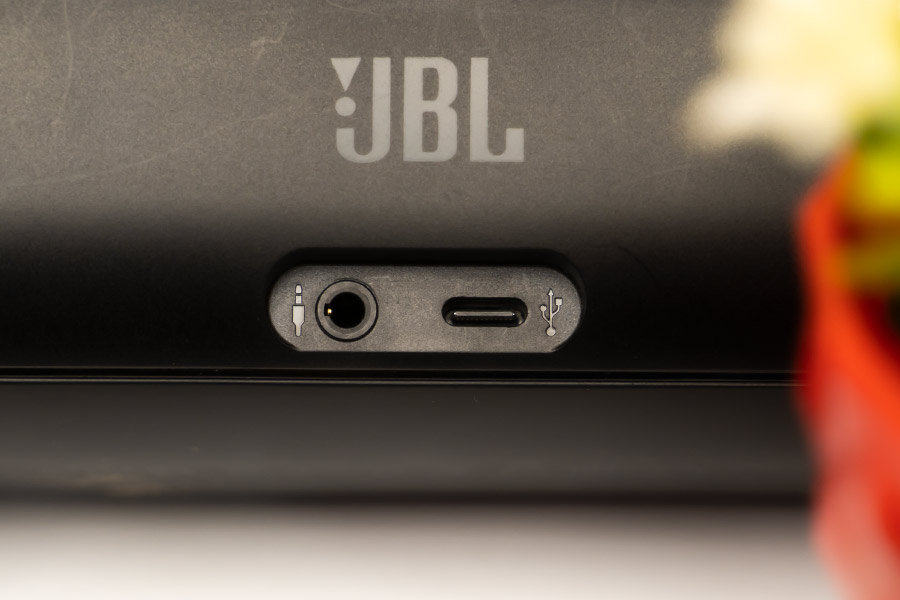 However, you will have to buy an adapter yourself as it doesn’t come included in the box. I charged the speaker using my 10W Samsung charger and it took around 4 hours for the charging to complete. If you use a lower wattage charger, it will take even longer.