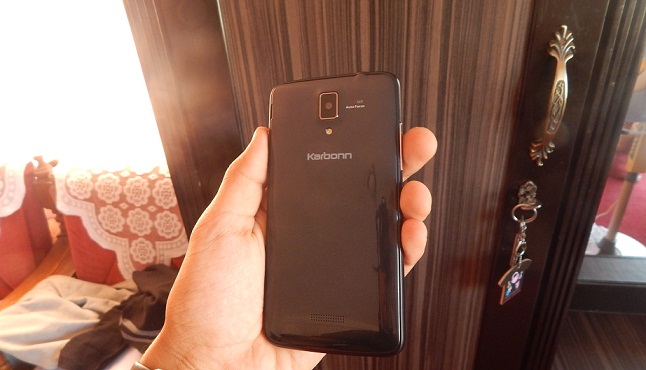 The Karbonn Titanium S5 plus is one of the budget smartphone of early 2014 to get released in Nepal. The successor of the older Titanium S5 is priced at Rs.16500. The improved and upgraded version has premium specifications for a low price. But is it punching above its weight?

The design of the Karbonn titanium S5 plus is best you can see on a budget smartphone. You have a glossy plastic build, with a chrome finish on the edges. The back cover is removable and you can have access to the Battery. So, you can carry 2 batteries if you are energy hunger nerd.The plastic build is not rigid, so we suggest you to buy flip cover or a back cover for the protection.

Titanium S5 sports a 5 inch IPS LCD screen with a resolution of 960 *540 with a pixel density of 220ppi. Though the display is qHD resolution, not HD, but the screen is sharp enough and it looks beautiful. The color reproduction from the LCD panel is fairly good and you won’t notice any pixelation while browsing internet or reading e-books. It runs on Android Jellybean 4.2.2 and the interface is highly customized. But the interface is snappy and fast. The OS is handled pretty well by the handset and we didn’t notice any lags in the overall performance even when we run about 6-8 apps at the same time. If you don’t like the User interface, you can always switch to third party launches.

The Titanium S5 Plus has a MediaTek MT6582 quad core processor ticking at 1.3 GHz and a 1 GB RAM to aid multitasking. It has a MALI 400MP2 GPU for graphics. It has an internal storage capacity of 4 GB which can be expanded via a microSD card by 32 GB.

For a smartphone Under Rs.20000, It notches fair good scores. With a tally of around 17000 in Antutu, above 5000 in Quadrant and a 61.2FPS in Nenomark, the device is top-notch considering its price tag.

The Titanium S5 plus is capable of running casual games like temple run 2, subway surfers, minion rush with ease. The touch response and the sensors work perfectly fine. However, when we play high end games like MC4,DT2, Asphalt 8 Airborne, etc. the Processor and GPU is incapable of handling it with ease and we will notice dropped frame rates and overheating issues after playing it for a lengthy period of time, which is standard on almost all  budget Android smartphones.

With a MediaTek processor which consumes less power than other high end processors, the 1800mAh battery will last for a day for average users. But it could have been better if the Battery was around 2200mAh.

The Titanium S5 Plus makes do with an 8MP rear camera with LED flash which is not better than the 5MP unit of the Moto G in terms of performance. It gets a VGA unit up front. The picture details of the rear cameras are not up to the mark. The color and sharpness are also pretty average. The rear snapper is capable of recording FHD videos. However, the videos produce noise during low light. To conclude, the Camera performs mediocre.

For a budget of around Rs. 16,500, we believe the Karbonn Titanium S5 Plus is more than a decent option if you are looking for good performance and sexy looks. The device performs very well bearing in mind the segment it falls in and we would definitely suggest this smartphone. Go for it!