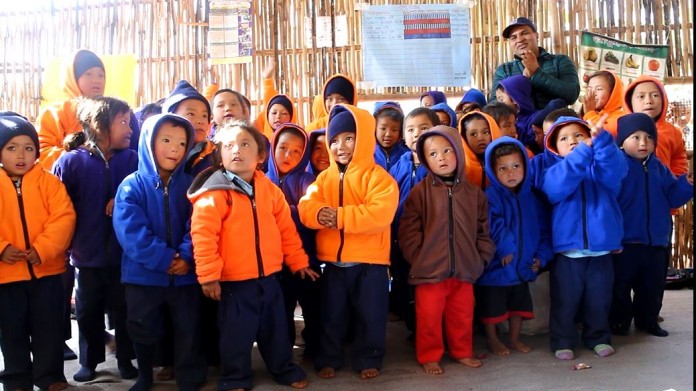 Kaymu, one of the largest e-commerce websites in Nepal, in the wake of extreme cold weather conditions handed over jackets to the children and blankets to the elderly citizens in Kavre as a part of its Sharing Smiles project. Sharing Smiles was implemented at earthquake affected Jana Jagaran Primary School located at Keuri, Jyamdi VDC in Kavre where 50 fleece jackets were provided to the students aged between 3 – 12 years. Likewise, 50 blankets were donated to the underprivileged Dalit community and single women in Rampur, Jyamdi VDC of Kavre district.

“This is the first initiative by Kaymu to contribute to the society by sharing smiles. Despite efforts from government and private sectors, a lot of people are suffering due to chilling temperature. Recognizing that children and elderly citizens are more vulnerable, the team at Kaymu collected funds and made an attempt to bring a smile on their faces by helping them warm up this winter,” –Rajeev Amatya, the Managing Director at Kaymu.

After the devastating earthquake, Jana Jagaran students from playgroup to Grade 3 study under the same roof with no proper classes allocated. The dropping temperature added more to their plights making it difficult to focus on their studies. Because of temporary shelter, it was especially hard to spend nights for the elderly citizens as the dew droplets dampened with what little they had to cover them.

“The students also enjoyed dancing and singing arranged by the team. Besides academics, activities as such help the students in developing their personality and hone their talent. To see the children full of excitement with this recreational program was overwhelming,” –Amatya.

Sharing Smiles project is to share smiles with the people in the country. Kaymu, in the coming days, intends to share more smiles and contribute to the community in all means possible. The video below highlights Kaymu’s efforts to make the world a better, and smarter place.