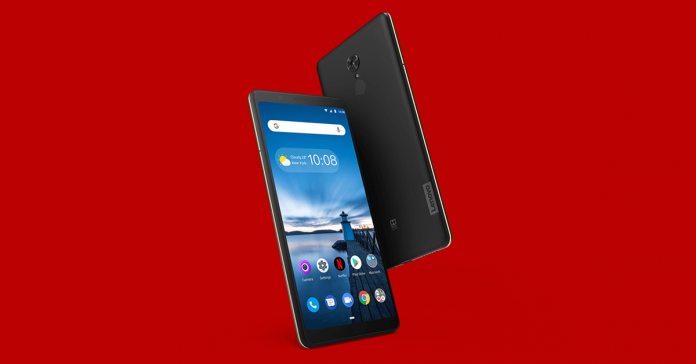 At a time when the smartphone makers are pushing their limits by launching foldable smartphones, Lenovo went old school by launching a tablet in 2019. The Lenovo Tab V7 is not actually a tablet by the way. It is basically a smartphone in the form factor of a tablet.

In terms of resolution, the Lenovo tab V7 comes with a 6.9-inch IPS LCD panel. But despite being a budget device, the phone features Full-HD+ resolution. The display comes in an 18:9 aspect ratio ditching the notches.

But the device stops getting exciting when peeked into its processor. The device is equipped with a Snapdragon 450 chipset, which is not capable of handling bigger workloads. Nonetheless, there is 4GB of RAM to aid in multitasking. On the storage side, the phone is enriched with 64GB of internal memory. Plus, there is also an option to expand the storage to 128GB via Micro SD card. Talking about the optics, the phone comes with a 13MP camera at the back ignoring the ongoing trend dual camera. Even on the front, there is just a single 5MP camera dedicated to capturing selfies. Despite the presence of a single camera, the phone will capture portrait images when needed. But since there is no secondary camera to fetch the depth info, the blurring process entirely takes place through the software intelligence.

This tall smartphone again starts to get interesting when the capacity of the battery is addressed. The Lenovo tab V7 comes with a 5180mAh battery, which is quite capable of fueling the device for a considerable period of time. But despite the massive size of the battery, the phone is merely 7.9mm in terms of thickness. Lenovo might have used all the empty spaces very cleverly. On the software front, the phone boots with the latest Android 9 Pie out of the box.

The phone will be available only in the Black color. And it will hit the market starting from April. When it comes to the price, the phone will demand  €249 on the purchase.