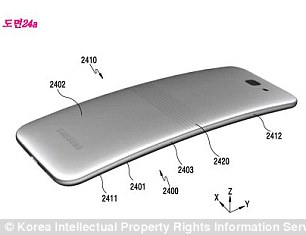 Customers were confused whether to buy a phone or a tablet. Right, then manufacturer came with the solution and named it “Phablet”. Well, phablets were more of a problem than a solution, to be honest. They didn’t find a right spot since they were neither phones nor tablets. They didn’t solve the real problem. The users want something with a big screen just like a tablet. At the same time, they want it to have portability of a phone maintaining smaller dimensions. Well, that was so unrealistic until Samsung registered a patent for a folding phone.

Leaked Image from Samsung's Patent for Folding Smartphone
1 of 4

When someone talks about a folding phone, I always remember the flip-phones from the past. Well, they were so cool until smartphones happened. I used to rock one and what I liked the most about it is the secondary screen it used to have. I didn’t have to flip open the phone to check time and notifications. If you are thinking why I’m talking about those phones then it is because the patent Samsung registered for a folding phone was just like the flip phones. One with a screen hidden under, and a hinge that helps in folding and unfolding of the device. But definitely, it has differences. It is going to be far more advanced than the flip phones. That’s for sure. The bigger problem for any manufacturer to come up with such phone is the screen itself needs to be bendable.

“Foldable Valley” could be the first folding Screen Smartphone

Trustable sources claim that such prototypes have already been made by Samsung and were tested in China. The foldable phones will be mass-produced as early as 2017 but Samsung hasn’t had the solid word yet, though. However, the device is codenamed “Foldable Valley”. From those being tested, there are two variants of such phones. One is powered by SnapDragon 620 and the other is powered by SnapDragon 820. Moreover, the device is rumored to have a 3GB of RAM, microSD card slot, and non-removable battery. It looks like a wallet when folded which is not so fancy to my liking. That’s one oddly looking phone.

Bear in mind, it is not just Samsung that is going to release a phone with bending screen. LG has been showcasing its bending display technology in different internationals shows. Latest bending screen made out of a thin film by LG seems promising than the plastic ones. LG is confident to sell 100,000 units of devices with foldable screens at the end of fourth quarter of 2017. Be it in a phone or TV, foldable screens are the future.