In an event held in California on Oct 27th, Apple unveiled the thinnest and lightest MacBook Pro ever (MacBook 2016). Like previous models, the design of the MacBook Pro 2016 is all aluminum. Making a mark on the 25th-anniversary, Apple announced a 15-inch Variant and two 13-inch variants. Both the 13-inch and 15-inch models are lighter than their predecessors. The 13-inch model actually takes less volume than MacBook Air.

The new MacBook Pro is officially available in Nepal from 4 different retail stores:

The brightest, most colorful Mac notebook display ever.

According to Apple, the displays has the same Retina resolution, but are both brighter and have a wider color range, and consume 30 percent less power.

The MacBook Pro has a brand new enormous trackpad that features Force Touch. Also, the new MacBook Pro comprises a new keyboard which uses the second-generation butterfly mechanism giving 4x more key stability. Also, its the end the functions keys, in place of the function keys is a new OLED strip. The OLED strip is a Retina display and multi-touch (supporting up to 10 simultaneous touches) and it responds to gestures.

Touch ID fingerprint sensor has been included for easier access on the power button(Also a part of touch bar). It will also work with Apple Pay (As Always!).

Basically, the Touch bar automatically syncs with the software you use. When you are browsing your picture you have related functionality tools and similarly with other apps too. You can slide along and tap.

Running the latest version of Mac OS Siera both will feature 4 USB Type-C thunderbolt port connectors that can be used for charging. 3.5mm Jack remains intact! 🙂 Performance aspect has not changed much while the 15-inch notebook packs a 6th Generation Quadcore i7 processor and a 16GB of RAM. It also packs the powerful AMD Polaris Radeon PRO GPU, dubbing to be twice as fast as its predecessor model. Apple Claims that the battery can last 10 Hours with normal usage. 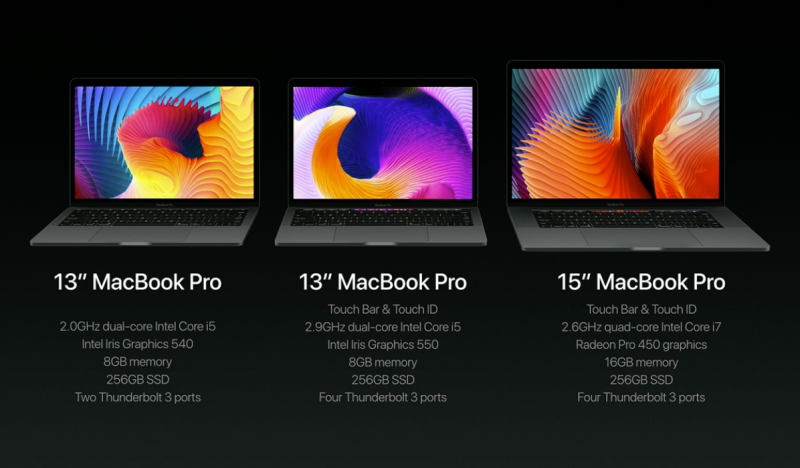