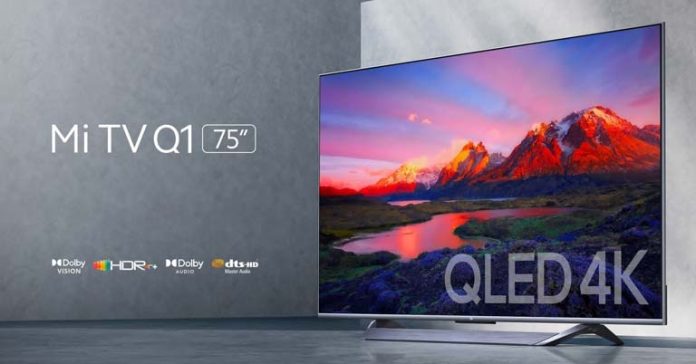 Today, Xiaomi Nepal hosted an event where it announced six new TVs, including the flagship Mi TV Q1 75. It is the most advanced TV from Xiaomi currently in the Nepali market. So, let’s take a look at the specs, features, official price, and availability of Xiaomi Mi TV Q1 75 in Nepal.

Starting with the display, Mi TV Q1 sports a 75-inch QLED panel that the company calls “Limitless” because of the minimized bezels. The screen-to-body ratio of the screen is 75%. The frame has a metallic finish to it.

The display panel covers 100% of NTSC and 95% of DCI P3. There viewing angle here is 178-degree so you want to have any problem viewing the content from anywhere in the room. It is also capable of reproducing up to 1.07 billion colors and up to 1,024 different color shades.

Xiaomi has included 192 zones of full array dynamic local dimming that can adjust brightness automatically for better contrast. Mi TV Q1 75 has support for HDR10+, HDR10, and HLG. The peak brightness is listed at 1000 nits and the contrast ratio is 10000:1.

The TV is powered by MediaTek MT9611. It’s a quad-core processor with a clock speed of up to 1.5GHz. The graphics are handled by Mali G52 MP2 GPU. Mi TV Q1 has 2GB of RAM and 32GB of internal storage. The TV ships with Android 10 OS and is compatible with Xiaomi’s PatchWall OS. The inclusion of Bluetooth Remote Control means that you won’t have to keep aiming at the TV for the TV to register the input. It also features dedicated buttons for Netflix, Amazon Prime Video, and Android TV Home Page.

One can cast contents from their smartphone to the Mi TV Q1 with the help of Chromecast and Miracast that come pre-installed on the TV. Google Assistant can pick up your voice if you are within a 3m radius of the TV. You can even connect your TV to other IoT devices.

Talking about ports, you get three HDMI ports, two USB ports, one Ethernet port, a digital tuner, an AV input, and an optical port for external audio devices. You also get dual-band Wi-Fi and Bluetooth 5.0 for wireless connectivity. The dual speaker setup consists of two tweeters and four woofers that contribute to a total output of 30W. The TV also has support for Dolby Audio and DTS HD.

The price of the Mi TV Q1 75 in Nepal is Rs. 299,999. You can buy one for yourself from Hukut and other Xiaomi-authorized stores across Nepal.