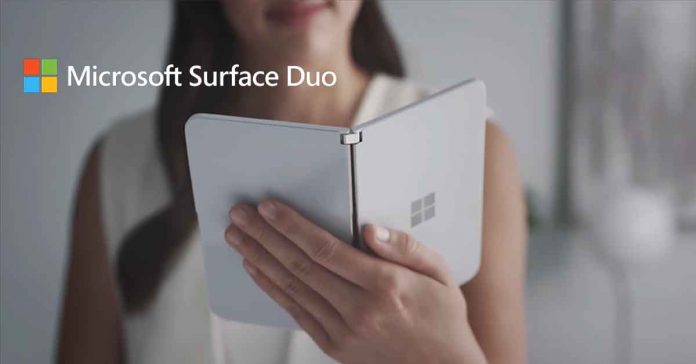 When Microsoft held its “Surface Event” last October, it did it in style- bringing its biggest ever line-up of products. One of the products that made its way into the event was Microsoft Surface Duo. With the Surface Duo, Microsoft announced its return to the smartphone industry. In a world where smartphone companies are racing to get on top of the folding smartphone technology, Microsoft’s idea of a dual-screen phone did raise some eyebrows. Though there is still some time left for the official launch of the device, videos showcasing the device have already emerged on the internet.

The Microsoft Surface Duo follows in the footsteps of devices like ZTE Axon M, LG G8X, and LG V50. It comes with dual-screen. Each of the screens measures 5.6-inch in diagonal length. A 360-degree hinge holds the two-screen in place. The thick gap between the two screens differentiates it from the trendy foldable phones. While a screen is used as a display, the other can be used as a keyboard or a game controller. Though Microsoft has already developed Windows 10X specifically for the foldable and dual-screen device, Surface Duo comes loaded with Android. However, Microsoft has tweaked Android to look like the Windows 10X. It is expected to launch at the end of 2020. Microsoft Surface Duo’s first hands-on video has recently surfaced on the internet. In the video, a person is caught using the Surface Duo. The phone can be used in both portrait and landscape mode. Though the second screen is designed for functions different than that of the primary screen, you can, however, use both of the screens for a single app.  The video also reveals a front flash that was missing in the device showcased at the Surface Event. A report from Windows Central claims that the device could have a single camera instead of the regular rear and front camera setup. The same report claims that Microsoft has started distributing the product to its employees for feedback and that the Surface Duo could hit the market earlier than expected. As of now, Microsoft has not dropped any official information about the specs of the Microsoft Surface Duo. The information about the device is so limited that we don’t even know the kind of display it has or their resolution. However, the device is rumored to come with Qualcomm’s Snapdragon 855 chipset and a specialized version of Android which Microsoft built working with Google. It will be launched during the Holiday period of 2020.