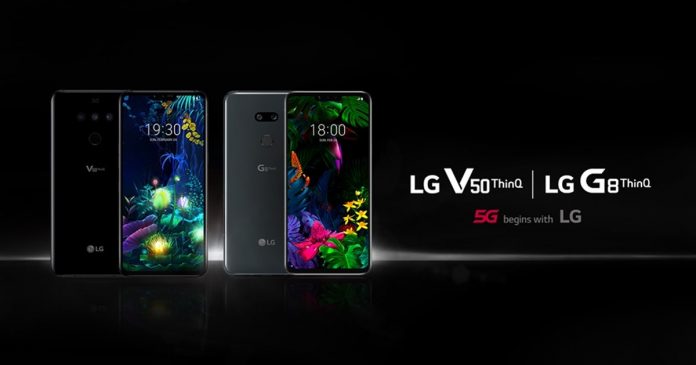 A few days back, South Korean tech company Samsung awe-inspired the world with its new flagship devices. And it did not take long for another South Korean smartphone maker to unveil its products. Yes, you guessed it right. LG also hit the MWC 2019’s big stage with its three new smartphones. Namely known as the LG V50 ThinQ 5G, G8 ThinQ, and G8s ThinQ, these smartphones come with LG’s new quirky Hand ID and Air Motion Gesture features.

The LG V50 ThinQ 5G is the company’s first take in the 5G ecosystem. Since the smartphone manufacturers are releasing a 5G phone every other day, LG also went on with the flow and dropped a flagship device embedded with a 5G modem. The phone is powered by Snapdragon 855 chipset and has been enriched with Qualcomm X50 modem to unleash its 5G potentials. On the storage front, the phone’s got 6GB of RAM and 128GB of onboard memory with a dedicated SD card for memory expansion.

On the design side, it looks blatantly similar to the last year’s LG V40 ThinQ. The phone is encased with Corning Gorilla on the front and back and comes encapsulated with an aluminum frame. It also comes with a 6.4-inch QHD+ OLED display. The display here is an HDR 10 compliant. So we can expect an amazing dynamic range of colors on the screen. But what doesn’t look cool about the display is a wide notch up top. While most of the other smartphone manufacturers are playing with the waterdrop style notches and punch hole display, LG followed last year’s bandwagon and implemented a wide notch on the top. And this doesn’t look so fascinating in 2019. The notch has been home to two selfie cameras – an 8MP primary shooter and a 5MP wide-angle one. The setup was present on the V40 ThinQ as well. And talking about the cameras on the back, the phone is showered with three cameras of various focal lengths. The primary one is a 12MP, 27mm, f/1.5 wide-camera, which comes equipped with a 3-axis OIS. There is also a 12MP telephoto shooter, which comes with f/2.4 lens and OIS. The telephoto camera on this device is capable of capturing images with 2x lossless optical zooming. A 16MP ultra-wide-angle camera completes the triple camera setup on the device. The ultra-wide-angle camera stretches the field of view and users can accommodate more portion of the subject into the images.

Like the last year’s device, the LG V50 ThinQ 5G also comes 32-bit Hi-Fi Quad DAC, so it may please a fair number of audiophiles. Plus, there is a big 4000mAh to provide long-lasting backup. Recently, we are seeing many smartphone brands bringing out foldable devices. But LG decided to skip that concept for a while. but as an answer to the trend, LG rather brought a dual screen accessory. The accessory is basically a case with a 6.2-inch secondary OLED display with Full-HD+ (1080 x 2160 pixels) resolution. The second screen comes alive when the pogo pins on the smartphone’s back connect with the accessory. The Dual Screen can come handy for multitasking and gaming. You can use the phone as a controller and the display on the accessory as the screen to view the contents. With these features, the device gives a vibe of the foldable smartphone of sorts.

Alongside the V50 ThinQ, LG also unveiled the LG G8s ThinQ and LG G8 ThinQ. Both of these smartphones feature the flagship Snapdragon 855 chipset and comes aboard with 6GB RAM. And as cued by their names, these smartphones do not come with the 5G capabilities.

In terms of display, the G8 ThinQ rocks with a 6.1-inch QHD+ OLED display whereas the G8s has got a 6.2-inch Full-HD+ OLED panel. In terms of power, a 3500mAh non-removable battery fuels the G8 ThinQ whereas it’s a block of 3550mAh battery on the G8 ThinQ.

But the triple camera setup on the G8 ThinQ is location specific. In some regions, the handset ships with only two cameras on the back.

Talking about the selfie camera, the phone comes with an 8MP standard selfie camera accompanied by a ToF (Time of Flight) 3D camera. In addition to gathering depth information while capturing portrait selfies, the ToF camera also authenticates the Hand ID of the users. It reads and acknowledges the thickness and characteristics of the veins in the palm of the users and unlocks the device accordingly. The 3D ToF camera also does 3D mapping of the face to enhance the security strength of Face Unlock feature. So it cannot be fooled with 2D photos to unlock the device.

Apart from that, users will also be able to control the phone through air gestures also known as Air Motion gestures. With this feature, users can wave a hand or pinch the air to take calls, to increase and decrease volume. This feature can also be used to take screenshots without even touching the screen.

In the launch event, LG didn’t reveal anything about the pricing. And no words were spoken about its availability. But we can expect the device any time on the Q2 of 2019.