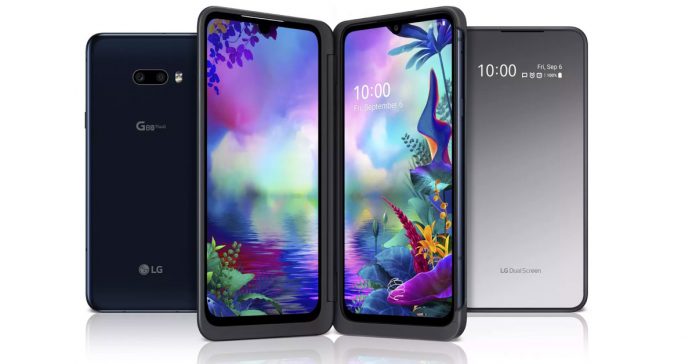 Multi-tasking is the mantra for most people. Thus, it is not surprising that tech companies are trying to cash in on this tendency of ours. Be it the Samsung Galaxy Fold or the Huawei Mate X, tech companies are all in for a bigger foldable smartphone. And the latest addition to such range comes from LG. The company announced its LG G8X ThinQ in the IFA 2019. However, the device is somewhat different from its competitors.

It is sort of a hybrid foldable phone. Meaning, the screen does not exactly fold in it. Rather it comes with a dual-screen snap-on case. There’s a standard USB-C port on the case that allows users to connect the secondary screen. Furthermore, activating the secondary screen is easy too. Just plug the device into the case and from the quick settings menu toggle on the dual-screen option.

The device has a sleek overall design and is all glass rear and front. The fingerprint sensor is in-display which allows for an uninterrupted rear. Moreover, the dual camera on the back fit in seamlessly, further complementing the design. The G8X ThinQ in addition to the IP68 rating boasts military-grade durability. Thus, the device will probably be able to handle rough scenarios.

Perfectly balanced speakers are another feature that this device boasts. located on both top and bottom, these speakers should provide improved stereo audio. Furthermore, the device still has a headphone jack which will probably please many users.

Rather than the traditional handset itself, the primary attraction for this device is its dual-screen. Both the displays are aesthetically symmetrical and feature a tiny waterdrop notch. They are 6.4-inch OLED display supporting Full HD+ resolution. Furthermore, there’s a small 2.1-inch display on the front of the attachable cover. It is not exactly a third screen but does display time, date and notification. However, the two displays are exactly like what they sound. It is dual-display. Thus, there’s a huge bezel in between the two screens. So, the dual-display is not exactly built for watching Netflix on a huge screen. Rather, you can watch Netflix and browse the internet simultaneously on its two screens. Furthermore, while capturing a photo you can actually fold the device to show your subjects what their image is turning out like as you are taking the photo.

Sticking to the subject of the camera, the rear has a dual camera featuring a 12MP primary sensor. It is complemented by an ultra-wide 13MP lens. The camera comes with a ton of features such as the AI Action Shot and the new ASMR video recording. And the front camera is a 32MP selfie shooter included in the notch of the primary screen.

The device uses the Snapdragon 855 chipset, a must-have for flagship phones. It runs on the Android 9 Pie with the new UX 9.0 on top. The G8X ThinQ will be available in 6GB /128GB variant only. However, there is a dedicated microSD slot that allows expanding storage up to 1TB. A 4000mAh battery powers the device. The battery supports Quick Charge 4.0, i.e 21W fast charging.

So, is this device the future of smartphones? Will it replace our primary computers? Well, it still remains to be seen how this device actually performs. But to me, it does seem like a viable concept.