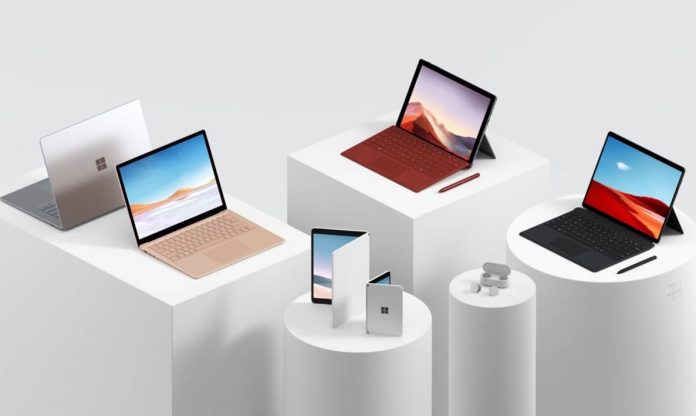 Microsoft held its annual “Surface Event” on October 2 at the Big Apple with the largest line-up of products in the company’s history. Embodying the notion of seamless flow and keeping people in the center mantra throughout the presentation, Microsoft announced an all-new laptop, wireless earbuds and many more. There are great-many things to get excited about here, so let’s dive deep into what Microsoft had to showcase at its event.

Microsoft has adopted a modular design in the Surface Laptop 3 with the ability to remove the top of the device for replacing the storage. However, Microsoft’s Chief Product Officer Panos Panay jokingly urged that general consumers don’t do it without any technical knowledge.

Microsoft claims it is 3x more powerful than the Macbook Air. Another exciting feature that comes with the Surface Laptop 3 (and other new Surface products) is fast-charging with up to 80% battery in an hour of charge.

The Surface Pro lineup also saw a new-gen product in the form of Surface Pro 7. Don’t expect any radical change from last year’s model since the most notable changes here include the Intel Dual/Quad-Core 10th Gen to last year’s 8th Gen processors. Akin to the Surface Laptop 3, this 2-in-1 laptop now also comes with USB-C connectivity. Also, in-line editing is now a reality where users can edit documents using their pen on the screen. The Surface Earbuds are the latest addition to the audio products in the Surface line. Looking like something from a tribal costume or an ear-gauge even, it sure stands out against the competition like Apple Airpods 2 or the Samsung Galaxy Buds at least in terms of its design. Surface Earbuds features touch, tap, swipe and voice control and has up to 24 hours of battery life. On a related note, Microsoft says a 10-minute charge is enough for up to 1 hour of use.

The directional dual-mic array on each earbud can provide some level of noise-canceling. Luckily, it is IPX4 waterproof which should protect your earbuds from light drizzles and splashes of water. The Surface Earbuds can caption audio in real-time and also translate it in real-time if the speaker and audience don’t share the same language. As of now, this feature is available for 60+ languages. Surface Earbuds works with all the popular virtual assistants like Google Assistant, Siri, Bixby and Microsoft’s own – Cortana. Microsoft also unveiled a brand new 2-in-1 hybrid laptop with LTE connectivity, that is powered by a custom ARM-based Microsoft SQ1 chipset alongside an integrated AI accelerator. Lots of custom chipsets for Microsoft this time. The Surface Pro X is basically a more power-efficient Surface Pro laptop.

It features a 13″ touchscreen with Alcantara covered Surface Pro X Signature Keyboard, which stores the and recharges Slim Pen. The AI engine seamlessly transitions the screen type when the Slim Pen is either removed or placed to charge. Each side of the device is 5.6mm thin. Microsoft claims users can expect incredible laptop-and-tablet experience in the Surface Neo multiple use-cases like mobile presentation, note-taking, content consumption, etc. The Surface Neo also has a magnetically attached keyboard on the back which when detached, automatically turns the remaining screen space to a fully functioning touchpad. As of right now, Microsoft hasn’t disclosed all the specifications of the device, but we do know it is powered by a hybrid Intel Lakefield processor with 11th Gen graphics engine design. It is scheduled to launch at the end of 2020.

Microsoft is back in the smartphone industry! Yes, you read that right. The Surface Duo is a dual-screen Android smartphone like the ZTE Axon M, LG G8X, and LG V50, with a 5.6″ display. It has a wider form-factor than an average smartphone even when considering only one side of the device, and thus looks more like a miniature Surface Neo or a small tablet. The Surface Duo unfolds into a dual-screen phone supported by a ̶3̶6̶5̶°̶ 360° hinge in the center. Like the Surface Neo, it can work in landscape mode with one screen turning into a keyboard, control area for your games, or other use-cases. Similarly, not many details about the Duo has been revealed and is scheduled to release at the end of 2020.

You can watch the event in its entirety by clicking here.