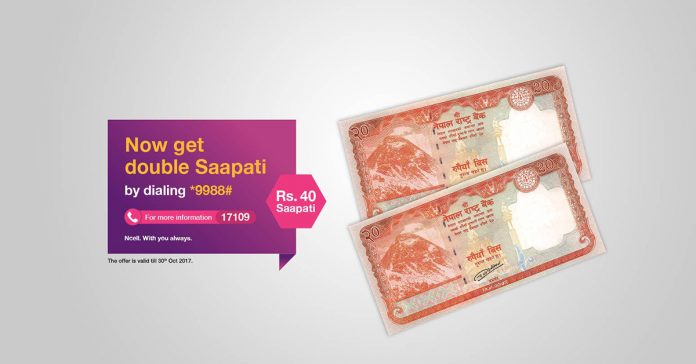 Ncell had introduced the Ncell Saapati offer five years ago. This offer quickly gained popularity among almost all Ncell users. And starting from yesterday (18th Shrawan), prepaid customers of the company can now take loans of Rs 40.

Customers are eligible for Saapati if they meet the following requirements:

The Saapati doesn’t have an expiry date, and service fee remains the same at Rs 2.51 (including tax).

The Ncell Saapati will be paid automatically the next time you recharge your SIM card. If the recharged amount is less than Rs. 40, the entire balance will be deducted, and Ncell will deduct remaining credit and service tax upon the next recharge. If you never recharge your phone after the Saapati, you won’t be able to pick make calls, but can still receive calls.

This service is valid until October 30, 2017. So, what do you think of Ncell’s new Saapati scheme? Do you like the addition of Rs. 20? Or was the previous Rs 20 enough for you. We did love to hear from you in the comment section down below.