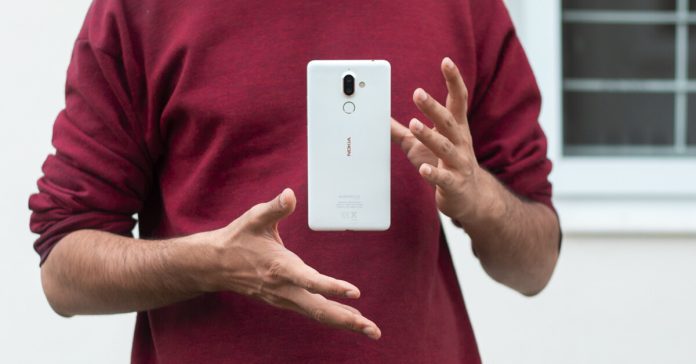 Different. That’s the word that popped in my mind when I held the Nokia 7 Plus for the first time. This new high-end midrange smartphone is quite different than what we usually see with Nokia devices with the elongated display and newer design. So, how does this device perform? Is it as good as Nokia has claimed it to be? Let’s find out in this review.

The Nokia 7 Plus is a metallic phone that is covered with what Nokia calls ceramic feel coating on its back. This material is just several layers of paint on top of the aluminum. It doesn’t feel like ceramic, but the texture is differently amazing. The phone also has a certain amount of heft to it which I have liked during my time of usage. What remains here from the older Nokia is the sturdy build which I have really liked during my time of using the smartphone. The device can also handle a few drops here and there, although I suggest handling your phone nicely. Overall, the Nokia 7 Plus is the perfect blend of what the older Nokia stood for and the current trend of 2018. Now let’s talk about the display of the Nokia 7 Plus. This phone comes with a tall and trendy 6-inch display with minimal bezels that speaks “modern”. I am really into vivid and saturated displays, and the 7 Plus has provided me with that. It is bright and sharp and for what it’s worth, the display is top-quality. However, at times, the display looks so saturated that some colors, take red, for example, look abnormal due to oversaturation. I noticed this while viewing pictures in the gallery. I had previously thought that this saturation was due to the cameras, but viewing it on my laptop, I realized the extent to which the display is saturated. So, even though the quality of this display is top-notch, you might not like the level of saturation at times.

In the camera department, there are a couple things that were strange here and there in the Nokia 7 Plus. The major problem I had was the difference in the skin tone when I took selfies. However, this issue exists only in group selfies. Nonetheless, the selfies are great with accurate details and just the right amount of sharpness.

The rear side is where things get interesting as the 7 Plus packs two cameras of 12-megapixel and 13-megapixel with Carl Zeiss branding. The secondary camera here acts as a telephoto lens that has 2x optical zoom.

In terms of quality, the Nokia 7 Plus captures pictures with good details, accurate colors and ample saturation. This camera here is well-enough for point and shoot pictures, and if you want to take pictures are per your own liking, there is a pro mode as well where you can adjust the ISO level, shutter speed, and exposure.

The exposure that this rear camera cranks up is helpful during night time as the pictures have a good amount of light in them. I took these samples of Bouddha at 8-ish in the evening and I like how lighted up this roadside is. Now I did face the issue of shaky pictures due to my shaky hands, but the end result was always nice. You get a hint of noise on the objects in the background, but it’s not that noticeable!

Now talking about the portrait mode, the device does justice to the pictures as it can effectively blur out the background of the images. The front camera also takes portrait shots, but it was kind of a mixed bag as you can see from the samples themselves.

Let’s talk about the software first. The Nokia 7 plus comes under Google’s Android One project and runs stock Android. Being a vanilla Android fan, I really liked using the 7 Plus with its lack of bloatware and smooth performance. This software has helped the processor as well, as the overall performance of the device is flawless. I haven’t experienced lags and the device too hasn’t given up on once.

With the high benchmarks and smooth performance, this device is probably one of the best performing mid-range devices right now.

The Nokia 7 Plus comes with 64 GB of onboard memory which is expandable up to 256 GB. However, Nokia has strangely included a hybrid SIM slot. So, if you want more storage, then you will have to give up on your second SIM card. Sound quality wise, the bottom-firing speaker is kind of loud but don’t expect more from it. The Nokia 7 Plus has a rear-mounted fingerprint scanner which unlocks the smartphone with no issue whatsoever. It is fast and secure. However, if you are into mobile phones featuring face unlock, you might be disappointed to know that the device lacks that security option.

The Nokia 7 Plus has a huge 3800 mAh battery inside. I was expecting it to completely nail the battery department, but to my surprise, I was disappointed. I got around 5 hours of screen-on-time during my usage which lasted for a day and a half. Maybe this is a flaw with the unit I received as other reviewers have actually praised the battery life, but during my usage, it didn’t impress me as it was only average. But the phone does support Quick Charge 4.0, so the charge will be back up in no time.

So, all in all, I have really liked using this device. It has everything you can ask for in a good mid-range phone, a vivid display, good cameras, smooth performance and stock Android. There are one or two complaints I have with this device, with one being the price itself. I think this device has been overpriced slightly and it would be much better if Paramount decreases the price tag of the 7 Plus but a few thousand bucks. If the company does so, this flagship mid-range will be the best bang-for-buck smartphone right now!

With what the 7 plus has at the helm, it’s one of the nicest smartphones around and you will not regret buying it.