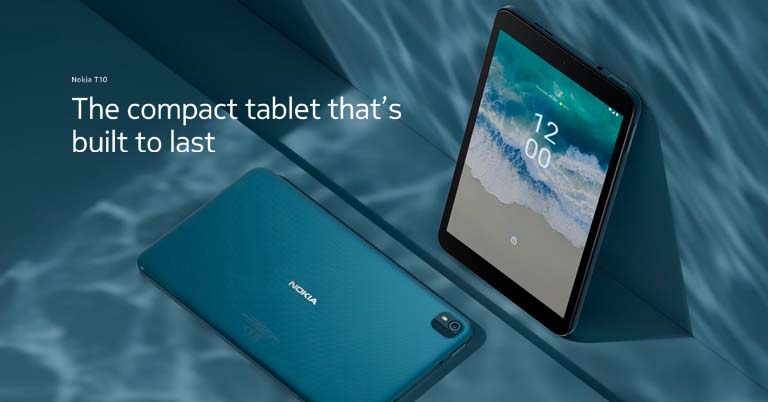 Yesterday was a huge day for Nokia. Not only did the company launch a bunch of nostalgic features phones, it even announced a new entry-level tablet. In this article, we will discuss the Nokia T10 in more detail, including its specs, features, expected price, and availability in Nepal.

Nokia T10 features an 8” LCD screen with thick bezels all around, especially at the top and bottom. It is an HD screen with 800 x 1280 px resolution and a 16:10 aspect ratio. The display is fully laminated and has toughened glass for protection.

Nokia T10 tablet does have Widevine L1 support, which means it can stream HD movies and shows in Netflix. In addition, the tablet comes with Google Entertainment which acts as a common hub for movies and shows from multiple streaming services.

The screen is enclosed inside a polycarbonate body with a splash-resistant IPX2 rating. The tablet measures 9mm in thickness and weighs around 375 grams. Furthermore, it is available in a single Ocean Blue color. Over on the audio front, it comes with a pair of stereo speakers with a bunch of audio optimizations from OZO.

There is a 2MP camera at the front, which together with the single microphone, facilitates video calls. Nokia even uses it for the Face Unlock feature, which surprisingly works even with a mask.

You can also find a second camera at the back with an 8MP resolution and an LED flash.

Powering the Nokia T10 tablet is the Unisoc T606 chipset which is an entry-level chipset based on a 12nm FinFET process.

It comes with 2 Cortex-A75 cores and 6 Cortex-A55 cores, all clocked at 1.6GHz. The graphics are handled by ARM Mali G57 GPU, which features a single-core clocked at 650MHz.

Nokia has paired the chip with 3GB RAM and 32GB internal storage. The latter can be expanded up to 512GB with the help of an external SD card slot. 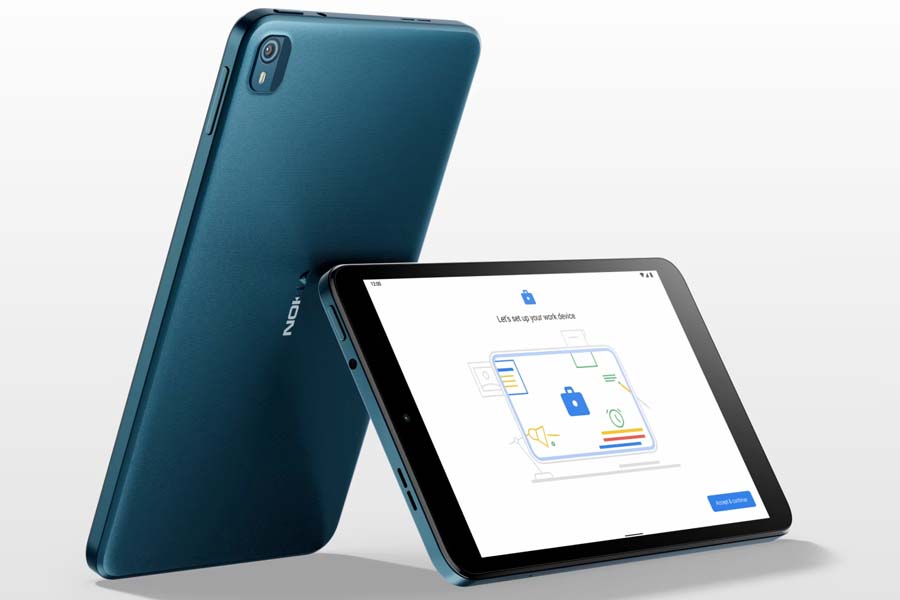 Nokia is among the few companies that offer neat-stock Android offerings in all its smartphones and tablets. The T10 tablet in question, comes with the vanilla Android 12 out of the box.

Since it is a tablet, you also get Google’s Kid Space and the new Entertainment Space.

In addition, Nokia is also promising two years of major Android updates, which is quite rare in the budget tablet market.

Fueling the Nokia T10 Android tablet is a 5,250mAh battery with support for 10W charging. Once fully charged, Nokia says it can last an entire day. The tablet supports dual-band Wi-Fi and Bluetooth 5.0. You can also opt for an LTE version which has a SIM slot, proximity sensor, and A-GPS navigation system.

Currently, Nokia T10 is available in the UK, where it’s priced at GBP 129 for the Wi-F-only model and GBP 149 for the LTE variant. If it launches in Nepal, we expect the price of the Nokia T10 Android Tablet to start at NPR 22,500.