Nokia just released quite an unusual but ingeniously designed phone called the Nokia 5710 XpressAudio. It seems like a standard Nokia Candybar phone until you realize it has an inbuilt TWS earphone that can be tucked away at the rear of the phone. So, let’s have a look at the Nokia 5710 XpressAudio characteristics, features, availability, and estimated pricing in Nepal.

From the outside, the XpressAudio appears to be no different than other feature phones. But the actual trickery is hidden on the phone’s back, where a sliding mechanism shelters the buds and charges them while not in use. 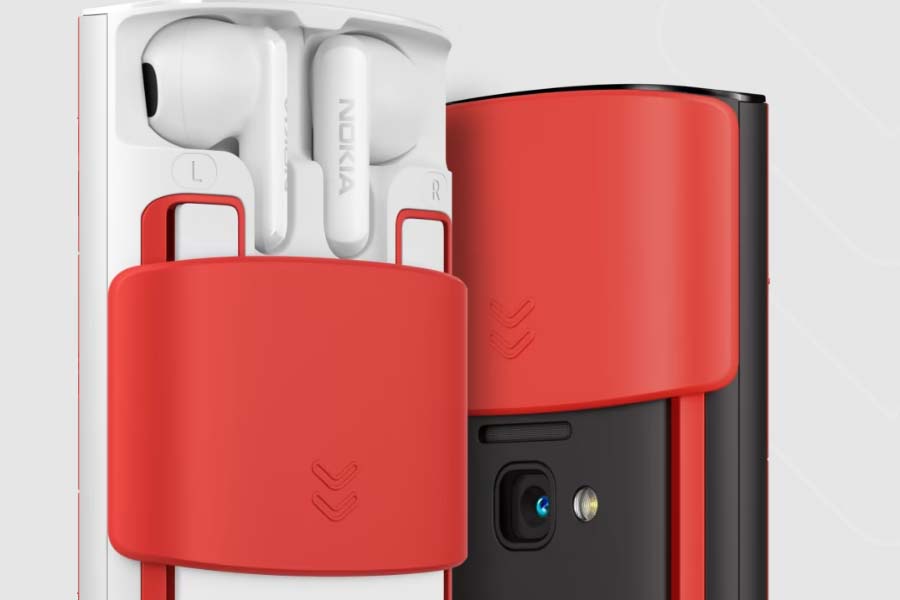 The buds can be used to listen to songs that are stored on the smartphone. By the way, the smartphone has a built-in storage of 128MB which is expandable up to 32GB via a microSD card. Since the TWS earbuds have Bluetooth 5.0 connectivity, you can also pair them with other smartphones or electronic devices.

Moreover, for those who like the more traditional FM radio listening experience, the smartphone also features a headphone port. On a single charge, the earphone delivers up to 2.4 hours of talk time or up to 4 hours of music playback.

In terms of display, the Nokia 5710 XpressAudio features a 2.4-inch color screen with QVGA resolution. There are signature audio control buttons at the side of the display. On the rear is a 0.3MP VGA camera, and the phone is powered by a 1,450mAh battery. It is rated to last up to 6 hours and charges via a micro USB port.

On the performance front, it is powered by a Unisoc T107 chipset and runs Nokia’s Series 30+ (S30+) OS, which was introduced in 2013. The Nokia 5710 is available in white/red and black/red, with earphones that complement the phone’s color. Likewise, for connectivity, the smartphone supports 4G networks and accepts a single Nano-SIM.

The XpressAudio is priced at £74.99 in the UK and will be available starting next month. We expect the price of the Nokia 5710 Xpress Audio to be NPR 10,000, if and when it launches in Nepal.