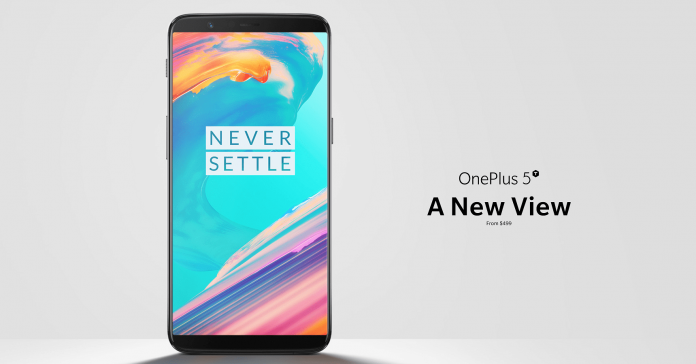 Amidst the hoard of all smartphone giants competing to create a mark for themselves with almost completely bezel-free designs, OnePlus: the Chinese smartphone marker, has also put forward a new product to add to the pile. In a LIVE event broadcast yesterday on 16th November 2017, the company unveiled the OnePlus 5T. It is also now available in Nepali market. The 64GB version costs Rs.64,900 and the 128GB version costs Rs. 72,900 in Nepal.

Earlier in 2016, the company had launched OnePlus 3 and then in the latter half of the year, OnePlus 3T was launched. Similarly, after the launch of OnePlus 5 in June 2017, the company made similar strategies like last year and launched the OnePlus 5T. With more attractive specs, OnePlus 5T seems to have set a new checkpoint for all smartphones. Without further ado, I would now like to walk you through the features of the latest release. The first thing that everyone would notice about the OnePlus 5T is the 6-inch full Optic AMOLED display with 18:9 aspect ratio display. This is also an upgrade compared to the OnePlus 5 which had 16:9 aspect ratio. But the thing to note here is that the form factor of the phone is still the same. The new aspect ratio is one of the primary specs of the OP 5T that guards it from other counterparts. The phone offers 1080P (1080 x 2160 pixels) resolution with 401ppi pixel density. Enabled with display features like sRGB and DCI-P3, the phone is all set to provide a better viewing experience to the users. The newer sunlight display feature enabled in this phone adjusts the display features according to the ambient light settings.

To make sure that the display stays immersive and offers the best of all available screen space, the manufacturers have also moved the fingerprint scanner to the back. The scanner unlocks the phone in 0.2 seconds and also incorporates gesture control, such as swiping to bring down the notification and quick settings dropdown and holding it to trigger the camera shutter when taking a selfie. The placement has also been done well, so this transition feels really smooth. Speaking of scanners, the OP 5T comes with a new feature: face unlock which is the fastest facial recognition on any smartphone (unlocks in 0.4 seconds). With over 100 facial identifiers, the face unlock can unlock the phone even when you are wearing a scarf or making a funny face. And safety is a primary concern, this feature does not work with sensitive apps: like payment app and so forth.

Moving on to the design of the phone, the OnePlus 5T has a seamless all metal chassis that ensure that the phone is slim, comfortable, easy to hold and also durable. The arced design of the phone makes it more ergonomic and flexible. Also, the manufacturers have brought back the horizon line: a continuous hard edge that emphasizes strength and agility by dividing the phone body into two halves: one casting light and the other one in shadow for a stunning effect. There is also an alert slider that is very easy to adjust – one doesn’t have to even pick up the phone for it. Users will be able to put their phones in three notification profiles:

Another crowd cheered at the launch event was the availability of the 3.5 mm headphone jack. Though the USB type C accessories are making a name for themselves in the market, a majority of the general public is still very much in love with the 3.5 mm audio jack. The cheering crowd at the event was also an indicator for this. Moving on to the camera department of the phone, the manufacturers claimed to have one of the best dual camera settings. Based on user preferences, the company has taken note to develop two key aspects of the dual rear cameras: low light performance and portraits. The main camera is 16MP with f/1.7 aperture and the secondary camera has been optimized for better low light performance allowing users to take clearer pictures in low light conditions. The 20 MP secondary camera, now comes with 27.22mm focal length and f/1.7 aperture. The secondary lens comes with Intelligent Pixel Technology which automatically groups pixels together in order for the original sensor to capture enough light and dark data, hence, enhancing the low light performance. Serious improvements have also been made here to make sure that portraits come clear and sharp. The front houses a 16MP camera with f/2.0 aperture.

The OnePlus 5T is still running on Android 7.1.1 Nougat with OxygenOS on top. Oreo has been available to the public since late August, and to see a new phone released in November with Android Nougat is a bit depressing. Display options like Night Mode and Reading Mode, that were also available on the OP 5, the revamped underlays of the OxygenOS in the OnePlus 5T are laudable. The changes OnePlus made to OxygenOS are welcome, such as its scalable Slate font to improve the viewing experience. However, the fact that an older Android version is just what the latest release has up for the offer, has raised some concerns for those who are a fan of Android updates.

The Snapdragon 835 processor with Adreno 540 graphics are the same as of its predecessor, and so are the two storage and RAM options: users can pick between 6GB of RAM with 64GB of storage or 8GB of RAM with 128GB of space. Backed by 3,300mAh battery, the OP 5T also come with the proprietary Dash Charge fast-charging technology. However, some latest techs like fast charging and waterproofing are still unavailable here.

One Plus 5T Price in Nepal:

iHub, the sole authorized distributor of One Plus products in Nepal, has launched the One Plus 5T in Nepal for a slightly exorbitant pricing. The company has priced the Oneplus 5T at Rs. 64,900 for the 6GB/64GB version and Rs.72,900 for the 8GB/128GB version.

Fans of OnePlus had the opportunity to see the unveiling live in person upon paying $40 for a ticket. The attendees did not only get a swag bag with lots of goodies inside, they also got a $40 off coupon for the OnePlus 5T. Moreover, the ticket proceedings from the launch event will be used to fund F-Droid: a software repository that acts as an alternative to the Google Play Store but only accepts free and open-source software (FOSS).

What is your say on the OnePlus 5T? Do you think the hype is worth it? Let us know in the comments below