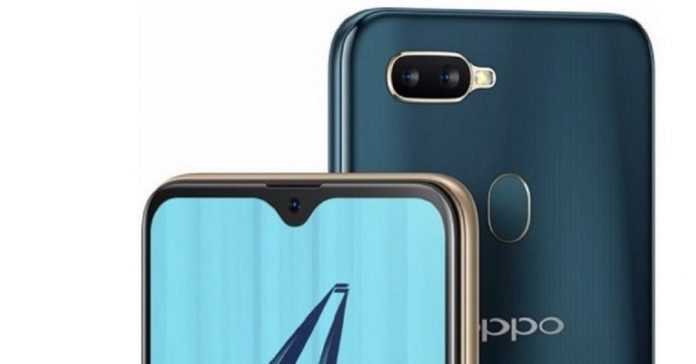 The Oppo A3s was a budget phone that could make its presence known. It was big, hefty and looked kinda attractive for a budget phone. Let’s say, it looked bold for the price you were paying. And now, it’s time for a successor. The OPPO A5s is launching soon, but as usual, we have the specs, leaks, and rumors right here.

According to the leaks and renders, the Oppo A5s looks, more or less, the same as the Oppo A3s. Except that, this one features a rear-mounted fingerprint sensor, which the A3s didn’t have. And the notch up front has changed to a small tear-drop one from an ugly looking big notch. Besides that, there aren’t any changes aesthetically.

You get the same plastic body, and it still looks bold. The display is also in the same size – a 6.2″ IPS LCD with HD+ resolution. For a screen this big, an HD+ resolution can be a bummer, but it is supposed to be a budget phone after all. They seem to have done a great job with minimizing the notch.

The camera department also sees no improvements – the phone will have the same dual-camera setup of 13 MP and a 2 MP depth sensor. And the front camera, too, will be the same 8 MP, but the aperture size has been improved from f/2.2 to f/2.0. The slightest bit of improvement for capturing selfies.

Inside, the phone will be powered by Helio P35 chipset. It is a considerable improvement over the Snapdragon 450 of the A3s. It should mean a slightly improved overall and gaming performance. The phone will come in three RAM variants apparently – 2 GB, 3 GB, and 4 GB while the A3s have 2 and 3 GB variants. The storage, too, varies from 32 GB and 64 GB. As for the battery, it has the same sized 4230 mAh battery, which is still good.

We’ll get to see 4 color options: Red, Black, Gold, and Green, but there is no word on the pricing and availability yet. Of course, these are still rumors, and we might see changes when the product finally launches. But if you ask me, the A5s doesn’t look like much of an improvement over the A3s.