Allied Tradelink, the authorised distributor of Panasonic smartphones in Nepal recently launched their latest phone, Eluga Mark. Priced at Rs. 21,990, it has a fingerprint scanner which we normally don’t see on a midrange phone that’s currently available in Nepal. The fingerprint scanner is located on the back of the device and works perfectly fine and unlocks the phone in less than a second.

When it comes to design, it has a plastic back like most of the previous generation phones from Panasonic. The back is removable, however, the battery is non-removable. Just can’t understand why smartphone brand does that… There is a dual SIM slot with first sim slot supporting 4G while the second sim support 3G. There is a microSD card slot for memory expansion for upto 32GB.

So Up front, the screen is of 5.5 inches, but the resolution is only HD giving us the pixel density of around 267ppi. While using it for some time, I had no problems with the display. It looks bright, and the IPS panel has good color reproduction and viewing angles. The touch is also responsive. What we didn’t like at our first impression is the big bezels the display has and also, the screen is deprived of any kind of protection, which is a letdown considering the pricing. Taking about the Software, Panasonic has kept the interface neat and tidy with a stock version of Lollipop 5.1. Although you can find some minor changes with the inclusion of this fit home UI that is intended to help users to use the phone with one hand, after all, it’s a pretty huge phone.

Under the hood, there are some interesting specs. The phone is powered by a QUALCOMM Snapdragon 615 System on a chip which is an Octacore 64bit processor. With 2GB of RAM onboard, the phone is quite fast and didn’t lag during our test. The more than capable Octacore processor and 2GB of RAM is more than enough for day to day task and has no issues while playing low end to mid end games. That being said, the phone does heat up exponentially when you play high graphics demanding games for more than 5 mins. 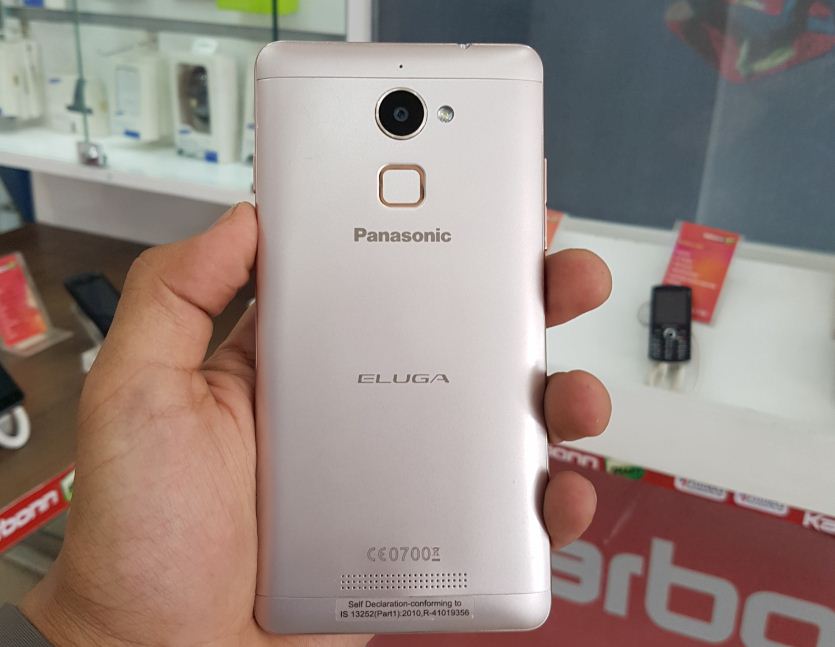 What I really liked about the phone though is its camera. The 13MP back camera will not disappoint you as it can capture really good photos with fairly good details during daylight and even under a low light condition, the phone doesn’t disappoint. However, the front camera isn’t that great considering the aggressive competition of selfie powered phones at this price range.

This phone has got a 2500mAh battery which is a decent performer, but don’t expect anything extraordinary from it. It will easily last you for a day under normal usage, but since the phone heats up a lot, the battery drains faster while playing games. Also, the phone lacks quick charging technology and fast wall charger, which means it takes roughly around 3 hours to get fully charged from 0% to 100%.

As for the verdict, I really liked the phone despite having some heating issues and front camera not being that good. However, it has a good vibrant 5.5-inch display, has a capable processor for day to day activity, has an excellent rear camera, and offers decent battery life. If your budget is around 20-22,000 and want a phone with a fingerprint sensor and if you are not a selfie maniac, then it should be an ideal phone for you.