With technological advancements, gaming has reached a new level. There was a time when playing Mario and Dave on fat-bellied desktops would give an ecstasy. Even with the irritating sound on the Brick games would inject us with immense joy. With the introduction of mobile phones, the games crawled there too. The memories of playing Snake game, Bounce and Space Impact on Nokia phones still bring nostalgia. Apart from the mobiles and computers, even the televisions have inbuilt games inside them. Since the evolution of smartphones, users might have enjoyed the games from Temple Run to Clash of Clans. And some of them might be still proud of their level on Candy Crush Saga.

So addressing gaming as one of the indispensable parts of modern entertainment, in this article, we have focused on the popular video gaming console, the Sony PlayStation. The Sony PlayStations price in Nepal, their availability and places to buy will slowly be revealed until the end of the article.

Nepa Hima Trade Link Private Limited is the authorized distributor of Sony products in Nepal. So along with the Sony smartphones, cameras and TVs, PlayStations are made available all over Nepal through the Nepa Hima Trade link. Currently, two models of PlayStation are available in Nepal through the authorized vendor. That includes PS4 Slim and PS4 Pro. Since the discontinuation of the original PS4 (PS4 2013), it is no longer available in Nepal. The PS4 Slim has a smaller footprint and slick design, a luring feature for the ones searching for portable PlayStation. Low power consumption and quieter operation have sprinkled the awesomeness on the top. PS4 Slim also has a better Wi-Fi chip, which has provisions for the 5GHz band for a more reliable connection (if you have a compatible router). The updated DualShock4 controller has been icing on the cake.

Despite the other alluring specs, the slim PS4 fails to provide an optical audio port, which is a letdown for third-party headphone users. Also, the absence of a 4K Ultra HD Blu-ray player is another disappointment for gamers with a 4K TV set.

The PS4 Pro is a step up from PS4 Slim designed for the ones with a 4K HDR TV and searching for crisp and vibrant visuals. The games are not exclusive for PS4 Pro and the same games, which run on PS4 Slim run fine with PS4 Pro. However, with an improved CPU and GPU assembly, PS4 Pro promises an enhanced quality of textures and lighting effects, leading to more realistic graphics and smoother performance with fewer slowdowns. Though packed with the same amount of system memory of 8GB GDDR5, PS4 Pro supersedes PS4 Slim in performance with a higher speed. The PS4 Pro is also nurtured with an extra 1GB of memory for non-gaming applications like Netflix, which prevents the wastage of gaming space allowing faster switching between the apps.

With the ability to handle 4K HDR video, PS4 Pro is obviously an alluring gaming console. However, without a matching 4K HDR TV set, the owners could barely see a remarkable difference from the PS4 Slim.

In Nepal, only the 1TB variant is available, which comes bundled with an extra controller and one game in addition. The price of PlayStation PS4 Pro in Nepal is Rs.64,000.

To engulf the gamers into more realistic visuals, there is VR (virtual reality) too, which is compatible with both the PlayStations. So, to unleash the full potential of your PlayStation, you need a PlayStation Virtual Reality (PSVR) for which you will have to spend extra bucks.

PlayStation VR is Sony’s virtual reality head-mounted display (HMD) that requires the PlayStation 4 (Slim/Pro). Alike the Oculus Rift and HTC Vive HMDs, PSVR comes with a stereoscopic 3D display aided by the optics that allows placing the screen directly in front of the eyes. The adjustable design has also allowed the calibration of the back headband and front-facing piece to achieve ideal visual clarity. The headset is also coupled with head-tracking, which simulates depth and positional awareness within a virtual environment (camera is required for this purpose, which comes bundled with PSVR). In addition, the headset is also well cushioned on the interior to evade the fatigue and discomfort even on the prolonged use.

For the visuality, PSVR employs a single 5.7-inch 1920x1080p OLED display with an approximately 100-degree field of view (FOV) and a 120Hz refresh rate panel. Though the PSVR’s 1920×1080 resolution fails to provide sharpness of the Vive or Rift’s 2160×1200 equivalent panels, the 120Hz compatibility on the PSVR is an advantage over the 90Hz displays on the Rift and Vive.

The PSVR package comes with a camera, CPU and a headset, which has a price of Rs. 65,000 in Nepal. However, without a PlayStation, PSVR has nothing to offer for the use. So, if you think of having PlayStation and PSVR at once then Nepa Hima Trade Link also offers a bundled package of PS4 Pro and PSVR providing a decent percentage of the discount.

The DualShock 4 is Sony’s proprietary Joystick especially targetted at the PlayStation gamers. The DualShock 4 controller packs precision control buttons to perform an enhanced accuracy while playing the games. The Joystick comes with an in-built six-axis motion sensing system to offer smooth tracking of the movements and delivering an accurate control while playing the games. 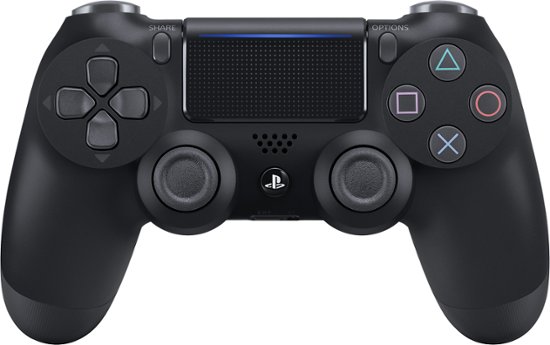 DualShock 4 is also light when it comes to weight. It weighs merely 210 grams and it is ergonomically comfortable on the use as well. Joystick also enjoys a 1000mAh battery. So even on the prolong gaming sessions, you don’t have to worry about the charge. Well, the DualShock 4 Wireless Controller is obviously one of the useful accessories while playing the games in a PlayStation. So if you are thinking of buying one, it will cost you Rs. 8,000 on the purchase.

The genuine Dual Shock Wireless Controller from the Playstation price in Nepal is Rs. 8,000. You can purchase it from Sony Centres located all over Nepal.

Where to buy PlayStation in Nepal?

If you are thinking to buy a PlayStation, then you can visit the Sony showrooms in Kantipath, Labim Mall (Second Floor) or in Jawalakhel or you can contact on the information provided.