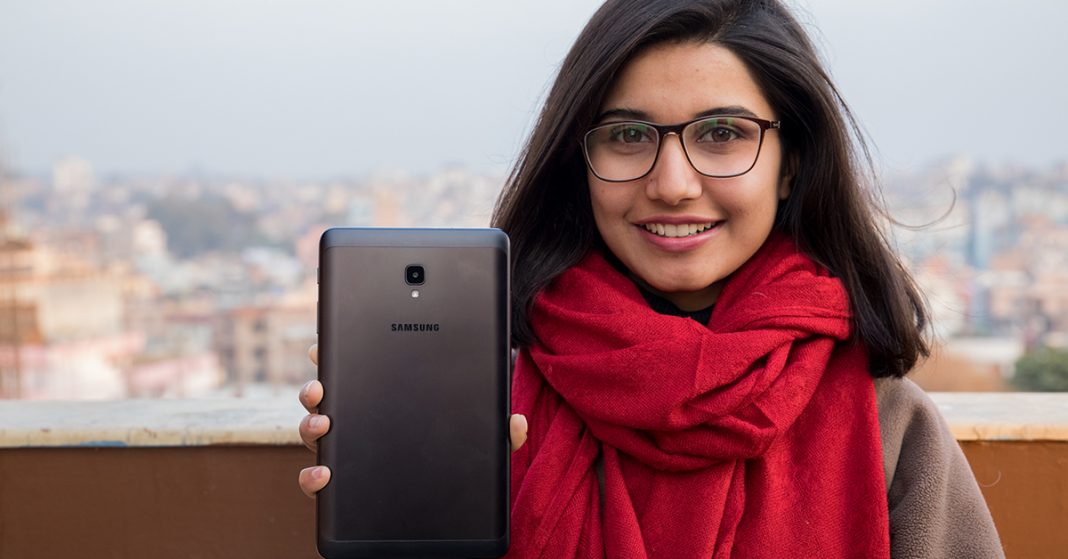 Samsung has been consistent in producing tablets as a product in their Android product line. However, people less apt to buy tablets because smartphones have started coming in bigger sizes. With such trend evident in the market, Samsung has brought yet another tablet in the Nepali market, the Samsung Galaxy Tab A 2017. This device, as Samsung claims is a total entertainer for the people. The major attraction it offers is a kids mode and Samsung’s flagship feature Bixby Home. Apart from that, it also offers a sleek design and a massive 5000mAh battery. With all these features onboard, is Samsung worth the price tag of Rs. 28,990? Let’s dive into the analysis.

I have quite liked the design that Samsung offers on the tablet. The Samsung Galaxy Tab A 2017 is an 8- inch giant covered with a plastic body. Though covered with plastic, it gives a metallic look and feel, so the device impresses us in this aspect. Also, the device is long but not too wide which gives it a plus point as it is easier to hold with one hand. I have small hands and even for me, it was not difficult holding it by one hand and using it with another. The device is a bit slippery but it does not hinder the usability that much. Another plus for the device would be the fact that it is very lightweight. 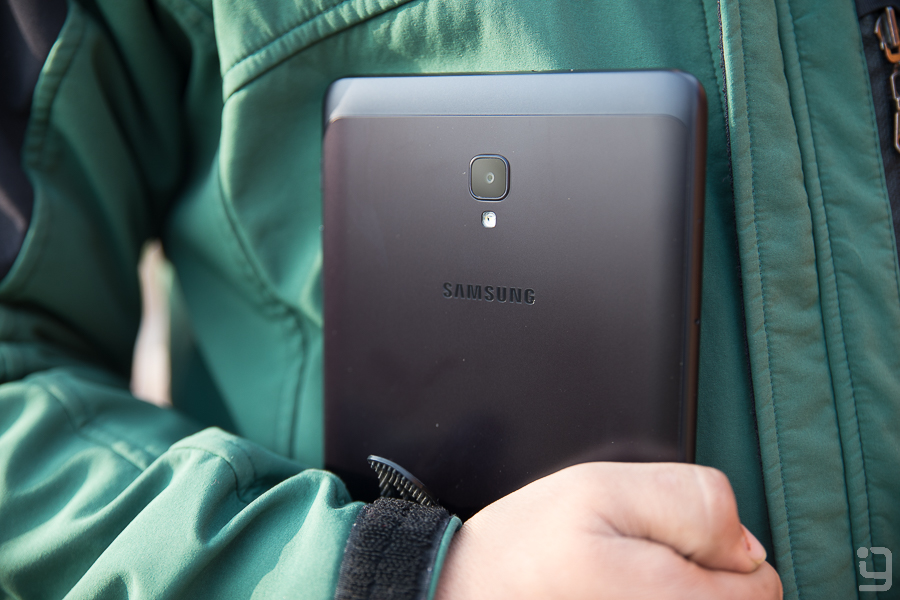 On the right top, we have the power button and just below it, there are volume control buttons. Similarly on the left are the SIM slot/ memory card slot. The top edge carries 3.5 mm, Jack. The speaker grills and the Micro USB port are at the bottom. The design of the Galaxy Tab 2017 is slim and sleek. I don’t have complaints in this department. Next, let’s go for the display. The device comes with an LCD panel with an 800×1280 pixels screen resolution. The display, I must say has good saturation and the viewing angles are good too. It has ample brightness and the colors look quite natural. However, it’s not full HD. It might be disappointing to some with pixelation. However, I didn’t have a problem using this under sunlight as well. I have spent hours watching movies on this device and I must say the big display certainly adds value to the visuals. It’s nothing like watching videos on smartphones. The contents look big and good on the large screen.

Moving on, let’s go for the performance. The Samsung Galaxy Tab A is powered by a Snapdragon 425 Quad-core processor clocked at a speed of 1.4 GHz. Similarly, it packs a combination of 2GB of RAM and 16 GB of onboard storage.

Now, I have not felt lags while switching through apps, I have felt that apps take relatively more time to open. Similarly, gaming in this device is a big no! Although it’s big and everything and the content looks good, it was difficult gaming on this device, probably due to the size. And also, games take more time to load and switching between games and apps is slow enough to make you want to close it altogether.

You will feel the stutters there and then when you play a game on this device which is very distracting. For normal usage, the performance is fine. The thing that is very disappointing is that there is no fingerprint sensor on this device. You can also insert SIM card on this device and use it as for making calls, which is good to know! However, using this device to make calls will cover your entire face on one side.

Okay, now let’s talk about the software and user experience. The Galaxy Tab A 2017 runs on Android Nougat 7.1.1 coupled with Samsung Experience version 8.5 and the Android security patch level is dated June 1, 2017. Well, it’s pretty recent, but not Oreo.

The interface is similar to recent Samsung Galaxy smartphones in the market. The UI is very simple and is one of the things I like the most in this device! You won’t find much bloatware onboard, so you are safe in this regard. I mean it comes with a package of Microsoft apps, Skype and Google apps which is a necessity on today’s date. There are some additions to the basic features like it comes with the Samsung’s flagship browser feature Bixby home but without voice assistance.

Similarly, it comes with a Kids mode. Now that is a useful family feature, to who it is targeted of course. When this feature is on, the entire UI has cartoon app icons and everything becomes childlike which is very useful to teach children as well as keep them away from other apps that are not kids friendly. At home, kids will now be using the secure content. There is also a secure folder where you can keep your files safe by adding security to it. There is an entire of kids features like kid’s camera, kid’s store, etc. where secure content for kids is available. This is very safe as well because children cannot log out of this mode without the code that their parents set. Similarly, kids will have a wider range of choices to learn and interact with the device.

The device is good for reading books and stuff and it also comes with a blue light filter to ensure eye comfort. I have read a lot of books on this device and I must say I am impressed with the size and display. This tab lets you multitask with the split screen mode which I thought was very useful. I could search for word meanings while reading books. Similarly, multitasking on the big screen makes you feel good.

Moving on, let’s go for the cameras. The Samsung Galaxy Tab A 2017 comes with a combination of 8 MP rear camera with LED flash and a 5 MP front camera. The pictures from the rear camera have good color reproduction and saturation in well-lit areas but under dim lights, the pictures are not good. Also while I zoomed in, the quality was awful. The selfie camera, on the other hand, is okay. I mean just okay. We cannot compare it with cameras of smartphones. Under ample lighting, the images look good. I am not bothered with the cameras in this device because I don’t see myself using such a huge thing to take a selfie.

However, it might be useful to some, so for them, the cameras are decent. There is also a beauty mode inbuilt but you cannot expect the pictures to be very good. The pictures, except for the dimly lit conditions are decent enough.Here are some pictures were taken from this device so that you can decide for yourself what the camera performance is like.

The battery is the next thing I am going to talk about. The Galaxy Tab A 2017 features a massive 5000mAh battery and I must say that is very impressive considering the device claims to be an entertainer. It has this huge screen wherein watching videos and reading books are the things I have liked to do and the battery has supported me all along. The battery lasted for two days straight.

The first day I watched movies for around 6 hours with using Facebook and Instagram now and then. The second day I read a book for hours. So, the battery-backed me up pretty well. I managed to get a screen on time of 9 hours.

Good news is that it supports type C charger so yes it’s onboard with the latest trend. However, it does not support fast charging and to get fully charged, it takes around 3 and half hours, which is a lot of time! Although it lasts long, it takes a lot of time to get charged. Would you like that? Let us know in the comments below.

So on a whole; I would not say that this tablet is a total entertainer as it claims to be. But this is useful at home for children and maybe for the readers out there. A good battery life, good looks, and a user-friendly interface are the only things I see in this tablet. This, I must say is a good family device at home, for kids and even for the elders. I have seriously used this device only to watch moves and read, which I can do in other devices as well.  For 28,990, I think the device is overpriced considering this does not feature a fingerprint sensor. You can get a smartphone with better, lot better features at this price.