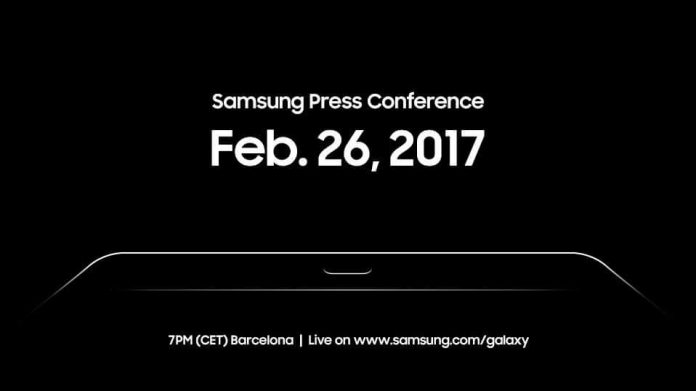 Yes, Samsung has confirmed that it will be hosting an event to showcase its newest device. While a few had suggested that Samsung would be launching its newest member of the S-series at Mobile World Congress (MWC), it looks like the Korean giant will instead launch a Galaxy Tab tablet instead. Rumors have suggested the tablet to be dubbed as the Samsung Galaxy Tab S3.

According to an official image, the event will be held on the 26th of February, exactly a day before MWC starts.

A successor to the Samsung Galaxy Tab S2, the Galaxy Tab S3 will sport a 9.7-inch Super AMOLED display with the resolution of 2048 x 1536 pixels. Beneath the hood, it is rumored to be powered by a Quad-core Qualcomm Snapdragon 820 processor that will be aided by 4GB of RAM and Adreno 530 GPU. It will most probably run on Android 7.0 Nougat out of the box. On the optics front, the Galaxy Tab S3 is rumored to feature a 12-megapixel rear facing camera and a 5-megapixel front facing camera. There will also be an inclusion of a memory card slot if some rumors are to be believed.

Some reports suggest the Samsung Galaxy Tab S3 to be priced at $600. It might go on sale next month.

If the rumored specs are considered, the tablet might be a good buy to those looking for a bigger display and top-notch specs. However, with tablets losing their place to smartphones nowadays, it will be interesting to see how Samsung plans to make the tablet a success.

The event will be broadcasted live on Samsung’s official website at 11:45 PM NST.

Here’s everything you need to know about the rumored specifications of the Samsung Galaxy Tab S3:

Note: The specs might be different once the device is released.