Samsung Mobiles Nepal will be launching the Note 7 sometime next month, but that has not stopped retail shops from selling the grey variant of the Note 7. The grey variant will be deprived of Samsung warranty, and is priced exorbitantly at Rs. 1,35,000. The phone is currently available from M.K.Tradeline. 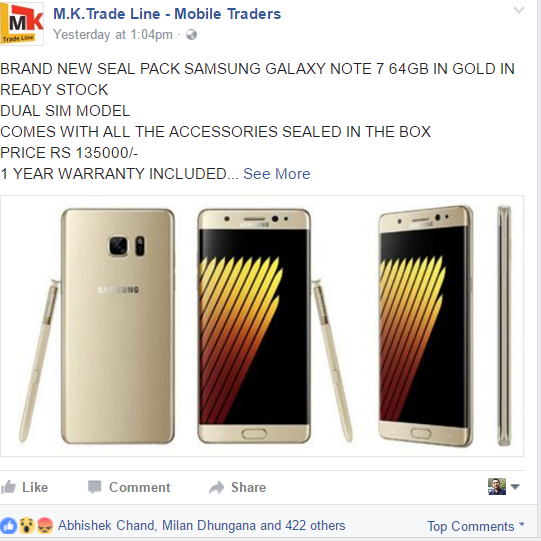 Until and unless you absolutely can’t wait for the official launch of Note 7 (scheduled for Sept.) or you have an extra cash lying around, I personally, don’t recommend you to get the Note 7 from the grey market. It would be wise to wait for few weeks and get it from the official Samsung store. Moreover, history suggests that Samsung Mobiles Nepal will be coming up with pre-order schemes like free Gear fit or Gear VR, so you don’t want to miss out on such freebies. The Samsung Galaxy Note 7 is already available in 10 countries that include US, Canada, Mexico, Puerto Rico, Australia, New Zealand, Singapore, Taiwan, UAE, and Korea. It is scheduled to launch in Europe on Sept 2. Coming back to the phone’s spec, it shares a lot of similarities with the Galaxy S7 edge, but also a few of its own tricks — including new S Pen features, fresh software and an iris scanner.

The Samsung Galaxy Note 7 features a 5.7-inch Quad HD Super AMOLED curved dual edge display with Corning Gorilla Glass 5 protection. It has a metal frame and a glass back reminiscent of the S7 Edge. The Note 7 is also IP68 water resistant; the first Note series to have it. Powering the device is an Octa-Core Exynos 8890 processor with 4GB RAM which is exactly the same configuration as the Galaxy S7, so we can expect excellent performance.

In terms of storage, the Note 7 comes in just one storage variant with 64GB of memory that is expandable via microSD card slot upto 256GB. As far as the camera is concerned, the Note 7 features exactly the same camera as the Galaxy S7 Edge. It has a 12MP rear camera with LED Flash, dual-pixel PDAF, Smart OIS, and f/1.7 aperture. The front houses a 5MP front-facing camera with f/1.7 aperture.

What’s new about the Note 7 is the inclusion of Iris Scanner, along with Fingerprint scanner on the home button. The Iris scanner lets you unlock the phone using eye recognition. The S-pen has also been improved with a smaller tip and improved pressure sensitivity. The Galaxy Note 7 is rocking Android 6.0.1 Marshmallow and should receive the Android 7 Nougat sometime in the future. The Galaxy Note 7 also boasts a USB type C port which charges the 3500mAh non-removable battery. Overall, the Note 7 is much similar to the S7 Edge in terms of performance, display, camera, and build which is not a bad thing by any means. If you are using the S7 Edge or the Galaxy Note 5, the Note 7 might feel boring and less innovative. However, if you are using older generation Samsung phones or other Android handsets, the Note 7 might be an excellent upgrade.