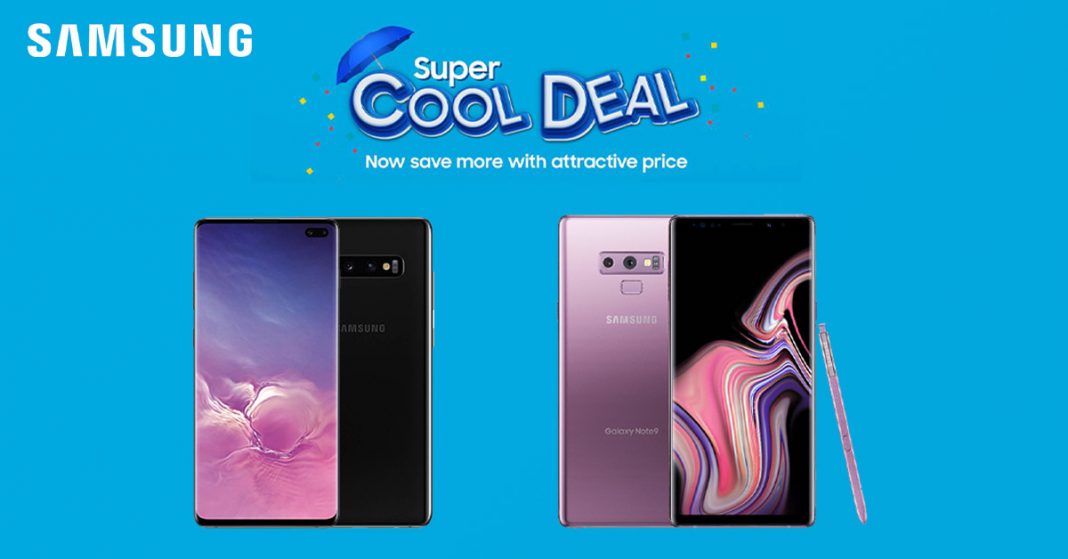 It’s common knowledge that Samsung phones get the price drop treatment gradually. And Samsung has been dropping their phones prices in various recent offers. Even when the smartphone excise duty was cut in half, Samsung was the first company to respond. But this time, the offer is even better! As a part of the Samsung Super Cool deal, it decided to drop its flagships prices: namely, the Galaxy S10 and the Galaxy Note 9!

Samsung’s 2019 flagship phone, the Galaxy S10 is one of the best flagships out there. Samsung’s flagships feature unbeatable displays, and this phone is also a very zippy performer. In addition, with One UI, the performance is further optimized.  Now yes, the Exynos variant we get in Nepal do not get to that Snapdragon 855 mark in terms of benchmark scores, but it does its job very well, still.

In addition, the S10 makes a strong case for itself in terms of its compact size – something that’s just right in your hands. Furthermore, its cameras are still one of the best. The only slight problem might be its small 3400 mAh battery, but that is something that can be forgiven, given the other aspects and the recent price drop.

Samsung’s Note series are not for the casual ones, really. They’re more for a niche set of customers that value productivity over anything else. The Galaxy Note 9 is a similar device, designed to do more than your regular phones. With the improved S-Pen, you can do more with it, and the phone overall, is a pretty great one.

Of course, its bulky design and build might make it a bit over the top, but as I said, the phone is not really for everybody. However, its what underneath the body that takes the cake. Sure, the Snapdragon 845 is last year, but still, it does hold its own against some other phones.

This Samsung Super Cool Deal comes as a Samsung’s Monsoon Offer, and Samsung is flaunting its IP68 Rating this monsoon it seems. But this might also be to make the S10 and Note 9 more competitive to the likes of OnePlus 7 Pro and the Oppo Reno 10X Zoom, which cost around Rs.90000, too!