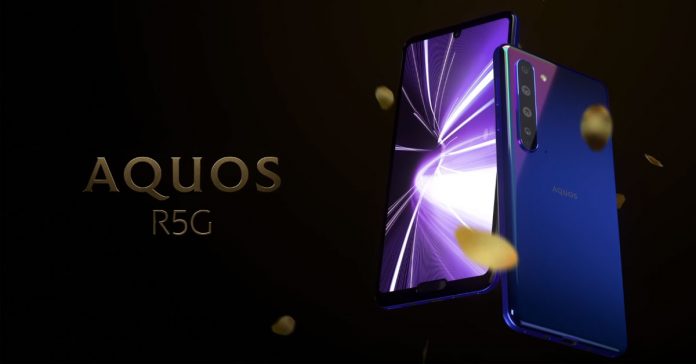 Sharp is not a brand that we hear about a lot in our part of the world. It is a corporation that designs and manufactures handsets for the Japanese domestic market and for a few overseas customers. Sharp is one of the top runners in the Android-based smartphone market in Japan and recently has come in the news for announcing the first 5G based phone in the Japanese market. The company has announced the Sharp Aquos R5G ahead of the network service that is due to launch in March.

The Aquos R5G is the latest flagship offering from the company in Japan and boasts the powerful Snapdragon 865 handling its performance. Furthermore, it also has an interesting spec-sheet that consists of a display with two notches. The display is an IPS 6.5-inch QHD+ screen that has a waterdrop cutout for the 16MP selfie camera and another bottom chin notch for the capacitive fingerprint sensor. Additionally, the screen boasts a 120Hz refresh rate among other flagship features.

Around the back, the phone has a quad-camera setup with a 12MP primary lens with support for OIS, a 48MP ultra-wide-angle lens that supports 8K video recording, a 12MP Telephoto module with OIS and the fourth is a ToF module.

The Snapdragon 865 comes paired with a whopping 12GB LPDDR5 RAM and 256GB UFS 3.1 storage which is further expandable up to 1TB via the microSD slot. Software-wise, you get the latest Android 10. The phone is IP68 compliant and also features stereo speakers for audio. For juice, the phone comes with a decent 3,730 mAh battery.

The price of the Sharp Aquos R5G has not been announced yet and the details regarding availability are not final too. But rumors are that the phone’s launch is delayed due to the outbreak of the Corona Virus.

Check out our comparison of the OnePlus 7T & Samsung Galaxy Note 10 Lite!