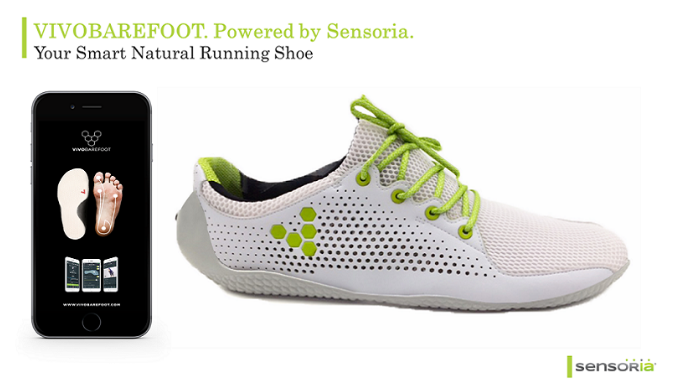 Runners know how much of impact a shoe can have while running. Many of us run every morning, some do this for health and some do this for athletics. No matter whatever your purpose of running is, to have the best benefits from it you must do it right. Not just having a good shoe is enough, having the best pace is what matters the most. To avoid injuries, one should excel his running pace and skills. A new advancement in the tech of smart wearable shoe promises to make your running efficient, smart and healthy. It is no other than the shoe from Sensoria and Vivobarefoot.

Smart Shoe made possible from Sensoria and VivoBarefoot

This smart shoe from Sensoria and VivoBarefoot lets the wearers track speed, impact force, foot landing technique and other metrics that can contribute to healthy running or walking. Each shoe packs two removable Sensoria sensors, each of which is connected to four pressure sensors on the shoe’s insole area. The metrics those sensors record can be later found using the Sensoria’s software that is now available for IOS and desktops. This app uses artificial intelligence to develop personalized training plans, using details it’s gleaned about one’s overall running form.

The monitoring of runner’s speed, pace, landing technique, time on the ground, impact score and other metrics can help runner gain natural running. Additionally, it will also help reduce the risk of injury by notifying what runner’s doing wrong in his technique.

Well, in prototype this is so much to see. But when this smart shoe becomes a real product, can it find it’s right customer? You already have smart wearable including smart watches and smart shocks. This already available wearable pretty much do the same job of tracking routes, speed, pace and the like. Personally, I find myself confused while thinking of what wearable should I be wearing while running. Well, we’ve some time to think on that since this product is no sooner going to be in the market. Let us know what you think about this smart shoe in the comments down below.