Home Android Charging one smartphone through another? Sony could turn it into a reality Your level of friendship could come into some real test if Sony is successful in implementing a new idea it patented a while back.

The Japanese Giant has earned a patent which has mentioned about a technology that can charge any smartphone when it comes in contact with another through a connectivity mean.

Wireless charging has started to become a common feature in most of the smartphones. Nokia started this concept in 2012. Fast-forward a few years, and global brands like LG, Google and Samsung have already implemented this technology in their smartphones.

And now, in 2017, Sony has plans to take this technology a little bit further as it is trying to charge Consumer Electronic device with another one.

The patent has mentioned the use of dual antennae system that could allow data transfer or power transfer between two consumer electronic devices.

An image illustrating two smartphones show how they can transfer power with each other.

The patent describes how the first antenna band in a device can connect to the second antenna band in another device. These devices connect via NFC (Near Field Communication), a technology that is a common feature of smartphones these days. Through the NFC chip, the electronic devices will be able to connect with another device featuring a similar type of antenna band. 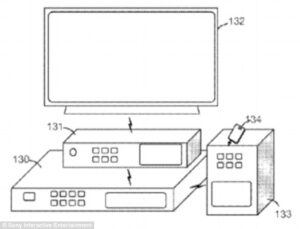 The patent hasn’t exactly mentioned the types of devices that can use this technology, but has instead termed ‘portable consumer electronic devices’.

So, if implemented correctly, this technology could be used to power devices such as smartphones, laptops, and tablets, among others, via similar devices.

We need to understand that just because a patent has been filed, that doesn’t necessarily mean the concept will come to life sometime in the near future.