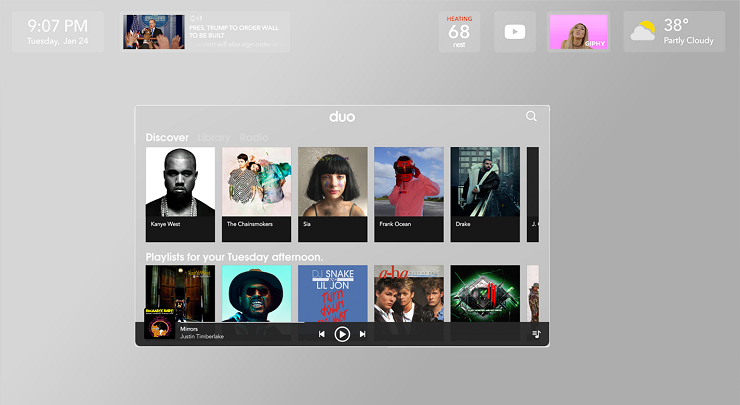 Superhero inspired computing seems to be coming to reality soon now. Yes, you read that right! Duo, a New York based start-up, has created an AI powered computer: Albert , that looks and  works like a mirror but performs much more than reflection.

Keeping aside the hardware, the key specifications of the Duo computer can be listed as follows-

According to the details released on the company’s official website, the main body of the machine weighs approximately 8 pounds. The separate computer box weighs less than 1 pound. The reflective surface, 0.25” two-way mirror, has been treated with a coat of anti-fingerprint (oleophobic). And the back panel and casing is ABS plastic.

Like other home AI assistants Alexa and Google Home, Albert is controlled by voice commands. It can understand commands to play music, videos, check the news, switch on/off the lights, or turn into a virtual art gallery through its own native apps and others that can be downloaded from the Duo App Store. It will also give you informations regarding the weather, your calendar, a summary of the main news stories, your favorite recipe.

The company has described it’s product as an AI computer for home and it’s pretty true to that fact. The computer almost makes up for an AI Butler. This virtual assistant named Albert, can also be customized by changing its name, gender, and accent.

The Duo looks like just about any other mirror you’d hang on your living room wall when it’s not in use and hence easily blends with the decor. But there is so much more to it than it just being another connected device or standalone AI assistant that complements your smart home setup — it’s a full-on home computer system housed in a mirror.

The computer is packed with with it’s own operating system – HomeOS. And the Duo team has also some promising offers for interested developers. The team has a specialized web-based HomeOS SDK for developers interested in building new apps for the system.

As of now, hands-on experience for this out of the world computing technology have not yet been permitted. Nevertheless, the company started taking pre-orders for the device on Tuesday and plans to ship its first batch to customers sometime this October. The first 5,000 people to order one will get it for $399, but after that, the price will increase to $500.

The Duo’s introductory video is as promising as it gets. For now, all we can do is wait to feel how it is, to live like in a superhero-vibe home.