Tecno is a rather unknown name in the Nepalese smartphone market. However, it ranks among the big players when it comes to the African market. In 2008, the company stopped its operation in the Asian market to focus on the African market. It made a return to Asia almost a decade later in 2017. And now, the company has re-entered the Nepali market with the Tecno Camon 15 Pro. Let’s check out the specs, features, official price, and availability of Tecno Camon 15 Pro in Nepal. 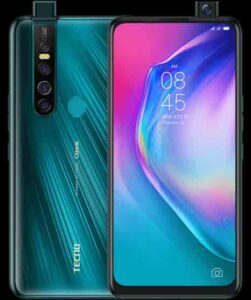 Tecno Camon 15 Pro features the same 6.6-inch Perfect Full-View Display. The panel packs in a total of 2400 x 1080 pixels. The highlight of the smartphone is the mechanized pop-up selfie camera. The front camera appears only when there is a need for it. Because of it, the smartphone boasts a screen to body ratio of 91.2%.

On the back, we see a long vertical camera module. The bump in the camera module looks significant. The gradient design on the rear panel is complemented by the exquisite textural lines.

The smartphone features an octa-core Helio P35 processor with a clock speed of up to 2.3Ghz. It is not the best performing mid-range chipset out there but Tecno has paired with 6GB of RAM. Thus, you won’t have any problem getting through normal day to day tasks and multitasking. Similarly, the internal storage on this smartphone is 128GB.

The highlight of the phone is its camera setup. It has four cameras on the back that are arranged linearly inside a rectangular module. A 48MP primary camera has a 1/2″ sensor. It combines four pixels into a 1.6micron pixel to obtain high-quality images. The second camera is the Ultra-Night TAIVOS lens. TAIVOS is the company’s AI-based optimization solution. Tecno claims that it will help capture clear shots under low light.

Similarly, the rest of the camera includes an ultra-wide-angle lens and a depth sensor. The former offers 115-degree of Field of View. Since it’s advertised as a night-time camera phone, it is equipped with not one but four LED flashes. Within the native camera app, you get a short video recording feature that lets you record 15s/60s Tiktok-like videos with 9 different in-built filters.

On the front, the selfie camera uses a 32MP sensor. It is now on a pop-up mechanism and remains hidden unless you need it. The pop-up mechanism has an anti-fall reaction and offers resistance to magnetic interference.

The battery capacity on this device 4,000mAh battery. Sadly, there is no information about the charging speed and fast charging support. It’s safe to believe that it doesn’t support any fast charging technology. The security-options include a rear-mounted fingerprint sensor and face unlock feature. It ships with HiOS 6.0 based on Android 10.

Not to forget, Tecno is offering 100 days of replacement guaranty for Tecno Camon 15 Pro. Additionally, users can also enjoy 13 months of warranty.