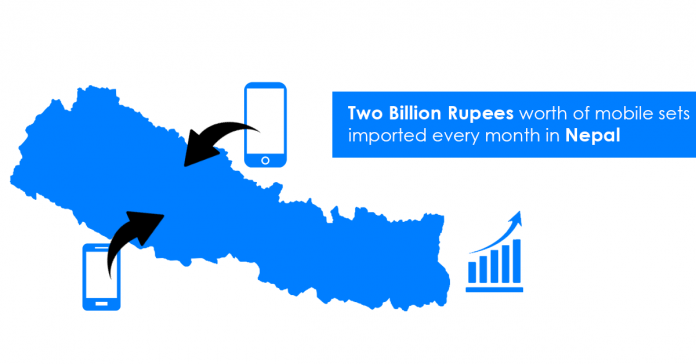 I’ll ask you all a simple question. How many of you bought a new mobile phone this month? I ask this because according to a recent report by the Department of Customs, nearly 2 billion rupees worth of mobile sets is imported in Nepal every month.

With the increasing demand, the import of mobile phones, especially smartphones, is increasing exponentially. If the first seven months of the fiscal year is taken into consideration, mobile sets come right after petrol/diesel, iron, automobiles and grains in the import industry.

The report states that from the month of Shrawan to Magh, an average of 515,285 mobile sets was imported in Nepal. This roughly translates to around Rs. 1,979,800,022 worth of phones.

China is the leading exporter of mobile phones to Nepal. Vietnam, India, Hong Kong, Switzerland, Taiwan, the USA, and the UK follow shortly. 28 counties, including the aforementioned ones, added up to a total of 3,613,995 phones imported in the first seven months of the current fiscal year. China alone exported around 3.26 million mobile sets.

It is not a surprise that China is the leading exporter of mobile phones to Nepal. Most of the multinational mobile companies make their phones in China (Apple included). Likewise, brands like Huawei, ZTE, Gionee, Oppo and Xiaomi also produce their sets in China. Even the Nepali mobile phone brand, Colors, makes phones in the same country.

According to Nepal Telecom, over 4000 mobile brands have got the permit to sell their phones in Nepal. ‘Type Approval’, a permit needed to sell mobile sets in Nepal, had already been provided to 4,393 brands by last Kartik.