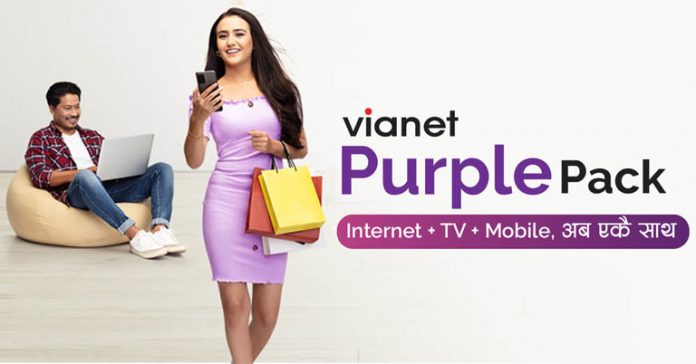 Last month, Nepal Telecom announced the Double Mazza offer, under which the company bundled mobile data with fiber internet. And now, Vianet has brought a similar package in partnership with Ncell. Here, we will be discussing the different packages, their pricing, terms and conditions, and availability of the Vianet Purple Pack.

Vianet is offering two internet plans under the Purple Pack offer. Users can choose between Purple Pack 80 and Purple Pack 100. As you may have guessed, these plans offer bandwidth of 80Mbps and 100Mbps, respectively. While Vianet has already been providing 100Mbps plans under the Guna Sampanna package, the 80Mbps plan is entirely new.

When subscribing to either of the Purple Pack, users will get a Ncell SIM for free. With it, they can use Vianet Mobile App for free (up to 1GB per month). In addition, Ncell is providing 4GB of data, 50 mins of voice call (Ncell-Ncell), and 50 SMS (Ncell-Ncell) every month for free.

You also get options like ViaTV (up to 3 connections), viaSecure, and Ultraboost as you get with the standard plans.

Unfortunately, this offer is only valid for annual subscriptions. The annual price for Purple Pack is Rs. 19,200 for the 80Mbps and Rs. 21,600 for the 100Mbps package.

In addition, more than one STB connections are subject to additional costs.

As for availability, the Vianet Purple Pack is currently available in the Kathmandu Valley only. Plus, the company has not mentioned any plans for future expansion either. You can learn more by visiting this link.

Here, Vianet has partnered with Ncell to provide added benefits to its consumer. Both companies are big in their respective sector.

That being said, the Purple Pack isn’t likely to make people cancel their current ISP and switch to Vianet. But it definitely adds value to existing Vianet users and those who are already considering Vianet.