Home Smartphone Review Vivo Y91 Review: Can it compete against the Galaxy Ms and Redmi... Vivo makes headlines when it comes to their concept phones and flagships with their innovative products. And there are the Vivo’s midrange V-series which are quite good too. But there’s also their Y-series, their budget segment, which actually accounts for most of their market share. And today I have here, the Vivo Y91, which is going head to head against the Samsung’s M-series and Xiaomi’s Redmi phones. So, does the Vivo Y91 provide as much value as its competitors? Let’s find out!

Let’s start the things with its design. Since Vivo Y91 is a budget handset, it comes with a polycarbonate back like most of its competitors out there. So this device doesn’t feel particularly sturdy. However, the back panel of the Vivo Y91 is glossy painted with dual-tone gradient colors, which is truly amazing. And the one I have is an Ocean Blue, which surely is an eye-candy. Also, it has curvy edges on its stylish back, which aids in an easy grip. So it didn’t slip through the hands on my use. But despite having a dazzling look, the smartphone also has its own imperfections in the design. The glossy back in it also a fingerprint magnet and requires cleaning quite often.

On the display front, there is a tall 6.22-inch IPS panel with a tiny notch on the top. Vivo likes to call it a Halo FullView display. Although I particularly don’t like the notches, the one on the Vivo Y91 is very tiny and less obtrusive. So I didn’t have any problems whatsoever. 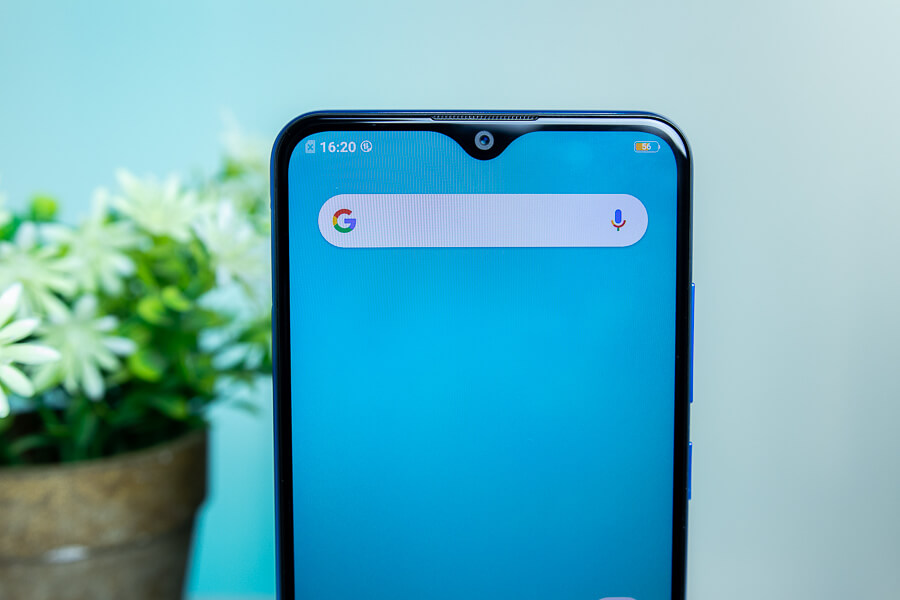 But what bugged me big time while using this Vivo device was its resolution. The handset comes with a merely HD+ resolution. A tall display and an HD+ resolution wasn’t the combination I was looking for. On close inspection, I was able to discern pixels in its screen at times and it was more evident while viewing contents on YouTube. 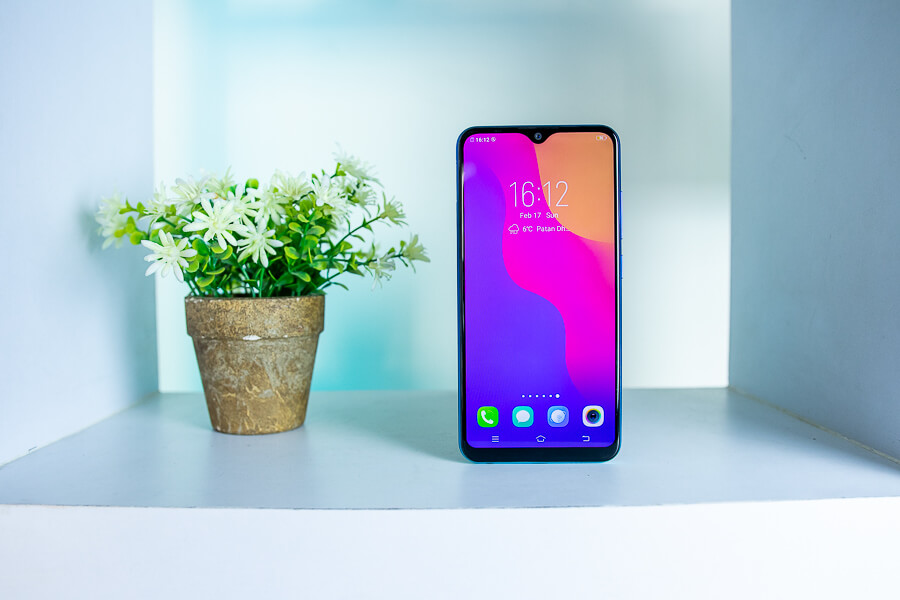 But other than that, I have nothing much to complain on its display. The viewing angle is decent, the colors look fine, and it also has good sunlight legibility. Plus there is an ambient light sensor to keep track of the surrounding brightness and to adjust the brightness of the display accordingly. So I didn’t have any hassles of altering the brightness every now and then.

Some portrait images also had similar traits. But most of the images I took from this device lacked a proper edge detection. Some images also had an inappropriate blurring, which was absolutely frustrating. There is also a feature to readjust the focus area and to tune the blur intensity after taking images. But I couldn’t mend those uneven blurring even with that feature. So capturing the portrait images got me absolutely downhearted.

Low light images weren’t that impressive either. They quite lacked the punch when it comes to the details. And the noises and grains also were quite substantial.

Heading to the front, there is an 8MP selfie camera, which rests quite perfectly on the notch. Although the front shooter pulls out some social media ready selfies, it beautifies the faces almost all the time. Even when Face Beauty turned off. Although I don’t like such beautifications, it may quite please the people who fancy beautified selfies.

The phone also has a portrait selfie feature, which can come really handy at times. But since blurring of the background takes place entirely through software intelligence, the resulting portrait images lack proper edge detection.

On the performance front, the smartphone comes powered with a MediaTek Helio P22 chipset. On the storage side, there are two variants: one with 2GB of RAM and 32GB of storage and another with a combination of 3GB RAM and 64GB of internal memory. And Vivo has yet again played a name game here. It has named the higher end variant as the Vivo Y91 and the basic variant as the Vivo Y91. And since the processor is same, the performance will be more or less the same on both the devices.

And talking about the performance on the Y91i, it can be a good daily driver if you are into normal apps and games. You can use Facebook, messenger, YouTube, and Instagram without any issues. The real trouble starts while playing high-end games. Asphalt 9 is not compatible with this device. And PUBG is playable only at the low setting. And even on the low setting, lags and stutters were inevitable. So if you are into gaming, you should probably skip this one.

Software-wise, the phone comes with an Android Oreo out of the box. At this time, I would have loved if it had an Android Pie but that’s not the case here. And in this already old OS, Vivo has added its own custom skin, the FunTouch OS 4.5 on the top. But using the FunTouch OS was no fun at all. The UI looked like a clone of an iPhone. The feature to swipe up to bring the toggle buttons has an uncanny resemblance with the iPhones.

Also, there is no app drawer. So all the installed apps get cluttered in the home screen, which looks absolutely displeasing. Furthermore, the lack of a search button in the setting is equally frustrating.

But over time, I kinda get used to it. And I must say that the UI has bundled a ton of features. Motorbike mode, Game mode, and Do Not Disturb mode were few among the many features I liked. All of the aforementioned features mute the calls and notifications while you are riding a bike, playing or a game or in a meeting. There is also the feature for navigation through the gestures, which is quite popular these days. Using the Face Unlock feature wasn’t a problem either, at least in the bright light. It was really snappy on the bright light setting. But it wasn’t the same in the low light scenarios. Since it doesn’t have a dedicated IR sensor, only the front camera comes into play while unlocking the device. So it doesn’t quite recognizes the faces in the dark and doesn’t unlock the device at all.

The Battery is the biggest highlight of the Y91. You get a big 4030mAh battery, which, combined with the low-res display and a low-end processor, backed me for almost two days on normal use. Also, there are Super Saver and Low Power Mode to extend the backup even further.

But to include a 5-Watt charger to charge a 4000mAh battery is plain stupid. It takes 4 hours of charging time with its included charger! So, I used a 10W charger, which took me 2 hours and 48 minutes. So if you want to juice up fast, you need to buy a separate 10W charger.

To sum it up, the Vivo Y91 is a good-looking phone with great battery life. The camera also looks decent for the price. But with these features, the Vivo Y91 is not particularly outstanding in the budget price point. The last year’s Redmi Note 5 AI and the recently launched Galaxy M20 pack better value. So, we urge Vivo to focus more on the choice of processor, at least provide a FullHD display and refine the Software to stand out in the competition.