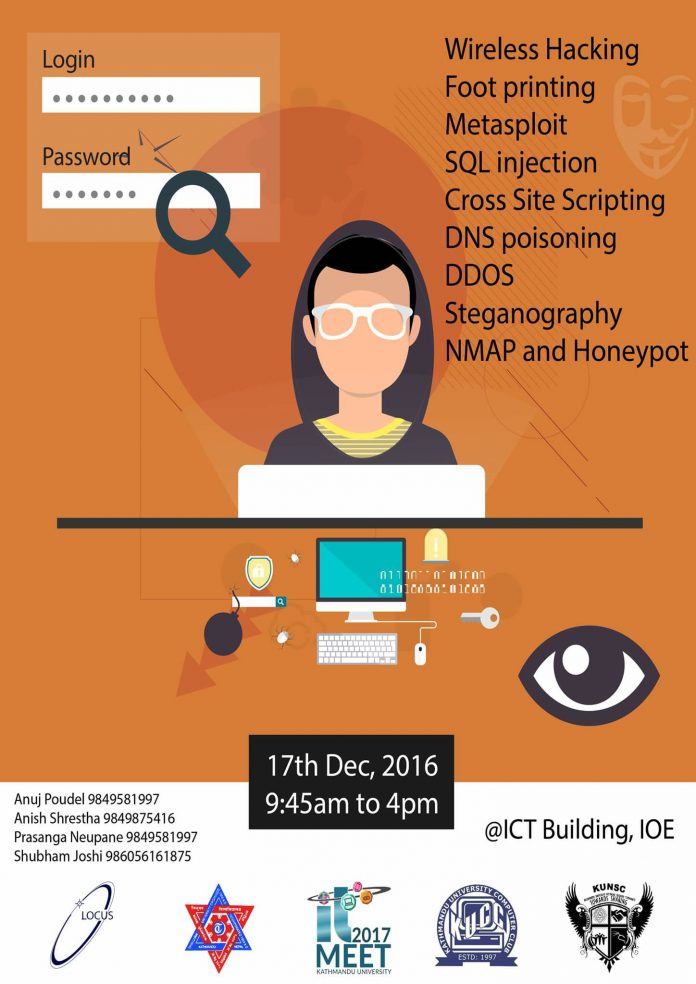 Going through the co-ordinate geometry, we have always understood locus as the set of all points whose coordinates satisfy a given equation or condition. However, this Locus means something else. This Locus is a student-run organization established to organize national wise technological festival (or technological exhibition) in IOE Central Campus, Pulchowk. Having the mutual collaboration of Department of Electrical, Electronics and Computer Engineering of Pulchowk Campus as the foundation, Locus runs different events and pre-events, which occurs annually. Following the trend, this year’s Locus event is scheduled to run for three days, which will be 8th, 9th and 10th of February 2016 (26,27,28 of Magh 2073). However, as a pre-event Locus has put forward a workshop on ethical hacking, which is going to be held on 17th of December 2016. To know more about the Locus and how it started, click here.

What is ethical hacking?

Ethical hacking is also termed as penetration testing, intrusion testing or red teaming. In ethical hacking, the ethical hackers also known as white hat hackers or white hats use different methods and techniques to test and bypass a system’s defenses. Unlike malicious hackers who are accustomed to taking advantage of any vulnerability found, whitehats locate weaknesses and vulnerabilities of computer and information systems and provide advice or take necessary actions on strengthening the system security boosting the defense system.

Presented as a pre-event of Locus 2017, Workshop on Ethical hacking is the result of collaboration between students of IOE Pulchowk and Kathmandu University (KU). This is one-day pre-event, which will be on 17th of December and the deadline for the registration is 15th of December. Locus has kept the doors open for everyone interested in the pre-event without any restrictions. However, the organizers have pre-mentioned about the limited seats for the concerned ones. Moreover, making an early registration and bringing a working laptop in the event is mandatory. To know more about the event, click here.