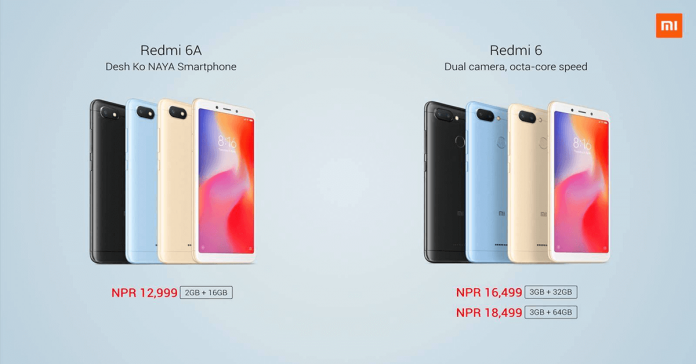 MI Nepal, in an event, organized very recently, unveiled two new entry-level phones in the Nepali market. The phones add more phones to the Xiaomi Redmi lineup. The Chinese tech giant launched the Xiaomi Redmi 6 and the Xiaomi Redmi 6A in Nepal. While these phones have been available for over 3 months, they’re just making their way here. Both are the successors to last year’s Redmi 5 and Redmi 5A. And similar to last year, the Redmi 6A is the lighter version of the Redmi 6. However, both of these phones don’t have the trending notch on their displays.

Also Read: Xiaomi MI A2 and MI A2 Lite launched in Nepal

The Xiaomi Redmi 6 is an entry-level phone and should be popular among consumers looking for budget phones. Even with its low price tag, it offers all the basic must-have features in 2018. The phone comes with a 5.45″ IPS LCD display with HD+ (1440 x 720) resolution and 18:9 aspect ratio. The Redmi 6 packs a dual camera setup at the back. The setup consists of a 12 MP lens with PDAF, and a 5 MP depth sensor; both with f/2.2 aperture. The front camera is a single 5 MP lens. Both the cameras are capable of capturing 1080p videos at 30 fps.

Under the hood, an entry level 2.0 GHz octa-core MediaTek Helio P22 chipset powers the device. Internationally, the phone comes in 3 GB or 4 GB RAM  choices, but here in Nepal, we only get the 3 GB RAM variant. However, there are options for storage. You can choose from either a 32 GB variant or a 64 GB variant. However, there is a microSD card slot in it that enables you to expand your storage up to 256 GB. It packs a 3000 mAh battery, which might be small, but for an entry-level phone, it should be enough. Also, the phone runs on Android 8.1 Oreo topped with MIUI 9 on top.

Also Read: Xiaomi MI A2 and A2 Lite launched in Nepal

The Xiaomi Redmi 6A is a lighter version of the Redmi 6. It falls in the lower entry-level segment. The phone features more or less a similar form factor to the Redmi 6, but compromises on quite a few aspects. It features the same 5.45″ IPS LCD display with HD+ resolution and 18:9 aspect ratio. However, it packs a single 13 MP camera at the back with f/2.2 aperture and PDAF (Phase Detection Auto-Focus). It is capable of recording 1080p videos @30 fps. The front camera is the same at 5 MP with f/2.2 aperture but cannot record 1080p videos. Under the hood, a 2.0 GHz quad-core Helio A22 chip powers the phone. And just like the Redmi 6, the phone is available in two RAM options internationally, but we only get the 2 GB variant in Nepal. So, the storage is also limited to 16 GB, but there is a dedicated microSD card slot. It also packs a similar 3000 mAh battery. In addition, this phone, too, runs on Android 8.1 Oreo with MIUI 9.0 on top.

So, what do you think of these two entry-level phones by Xiaomi? Do let us know.