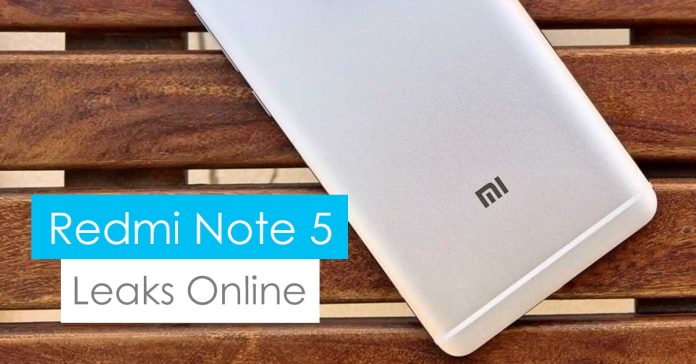 The leaks of the to-be-launched Xiaomi Redmi Note 5 that were leaked recently have revealed the bezel-less structure of the Note 5. The leaked images of the Note 5 have surfaced on the Chinese social media platform Weibo via MyFixGuide, according to which, Redmi Note 5 appears to have a 6-inch 18:9 display, making the phone significantly taller without increasing the actual size of the device. This has to be the first ever attempt of Xiaomi to change the looks of a mid-range release.

With an expected pricing of IRs. 14,999, the phone will come with dual rear cameras and a fingerprint scanner. Moving on, let’s now go through the speculated specifications of the Xiaomi Redmi Note 5. Along with images that have been leaked online, there have been other comments and speculations about the specifications of the Note 5. The phone is expected to have a 6.0-inch IPS display with Octa Core Qualcomm Snapdragon processor. Also, the phone is set to have 16 MP + 5 MP dual camera setup at the back accompanied with a front facing camera of undisclosed MP. Moreover, the chipset choice of the phone will probably be a Snapdragon 660 or a MediaTek Helio P25. The phone is rumored to be powered by a 4000mAh battery.

We will bring you more on the Xiaomi Redmi Note 5 once the official launch of the phone has been done. Stay tuned for more!