The Cricket World Cup is creating quite a buzz these days. And this ICC World Cup 2019 is something that has quite the audience. We, too, are fairly enthusiastic when it comes to cricket, and so, we got a new TV for that purpose in our office. But instead of going for brands like LG or Samsung, we thought why not give the underdogs the benefit of the doubt? So, we got this Yasuda 55″ 4K Smart LED TV.

Originally priced at Rs. 87,969, this TV was available for Rs. 74,774 due to its 15% discount in its recent Cricket World Cup offer. This TV did sound impressive on paper when we first eyed it. But let’s also find if this really is impressive in real life. This is a detailed review of the Yasuda 55-inch 4K Smart LED TV Review.

Aesthetically, the TV looks amazing because of its slim form factor. Adding to its attractiveness is the thin bezels around the display. However, being large in size, it occupies quite a lot of space on a table. So, I think its best if you mount it on the wall, which is what we did.

This smart TV runs on Android Marshmallow (v6.0) on its system. So the UI, icons, and features look quite familiar, too. Android smartphone users can feel right at home. But since it’s a bit older version, you might not take some time to get used to, though. Still, navigating through the features is also, more or less, similar. However, that can also can be hassle-free at times, because, well, shuffling through with the remote is a bit cumbersome. For example, typing the Wi-Fi password and searching for a video can make you want to pull your hair out. To ease the problems, however, you can make use of a mouse and a keyboard. Probably that’s the reason why Yasuda has incorporated a fair number of USB ports in the device, and I like it.

Specwise, this 4K LED TV also comes with 2 GB RAM and 8 GB of internal storage. If you are storing a video clip or taking a snapshot (screenshot), the TV stores those files in this onboard memory.

The connectivity, on this one, is great, actually. You get built-in Wi-Fi as well, which lets you stream YouTube/Netflix videos online or browse through the internet too. However, the Wi-Fi connectivity is not very good, to be honest. Even if you have fast and stable internet, the TV is sluggish to load the contents. But as a solution to that, you get a LAN port. With that, you can experience a remarkable jump in the internet speeds (compared with Wi-Fi). And during our usage with the LAN connection in our office, we were able to watch YouTube videos at a native 4K resolution, without any buffering. So you could say its quite impressive.

However, the 4K videos can only run at 30 fps smoothly. I tried loading them at 60 fps and noticed a few stutters. But of course, for a price like this, it’s also unfair of me to demand the best of features.

In addition, there is Bluetooth, 3x HDMI ports, 4x USB ports, and a headphone jack as well, if you fancy watching this big TV alone! With the HDMI ports, you can connect your PlayStation, ChromeCast, or an Amazon Fire TV stick, too. And if you’re bored of watching the regular TV channels, you can also use it to connect your laptop or PC to it, and stream contents from there. And that can prove to be a treat…and while you’re at it, why not try to game on it?

As I mentioned earlier, the USB ports let you connect a mouse and keyboard to ease the navigation process. The ports can also be used to plug in your USB-drive to watch multimedia on the go.

Now let’s talk about the display, which is the primary concern here. The display looks immaculate because of its tiny bezels. And while viewing the contents, it looks absolutely immersive. The viewing angle is also appreciable.

Yasuda also claims that this TV ensures the viewers’ eyes protection. However, the company hasn’t revealed many details regarding that tech. So, that remained a mystery during our review period. 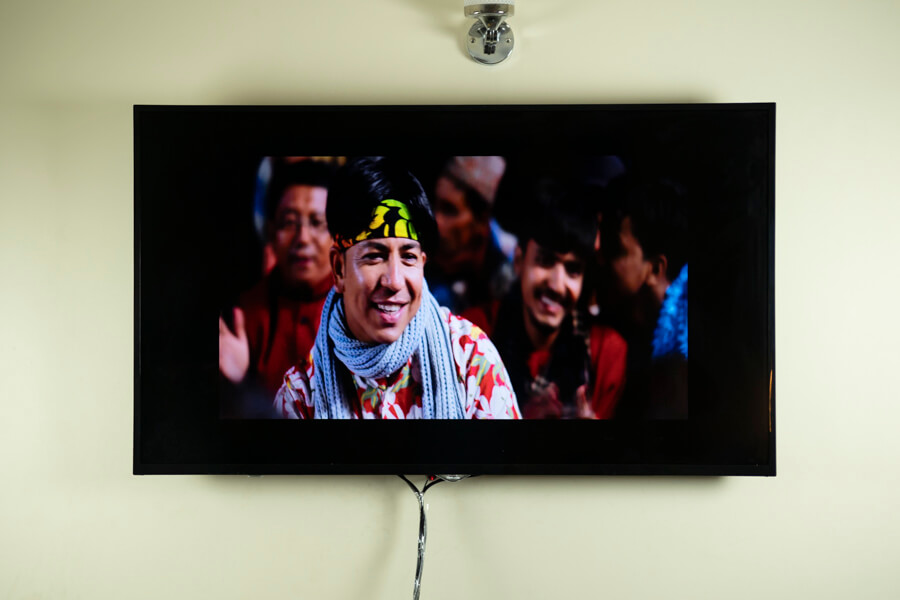 As for the display panel, Yasuda has used an A+ panel on this device. This kind of panel is quite different from the regular IPS or LED display. A+ panel actually refers to an achromatic panel, which uses a colorless transparent back panel on the back. And because of the colorless layer, the color will be unadulterated. That’s why such panels are said to have better color accuracy. And as far as the colors are concerned, they look fairly good. Unlike most cheap televisions, the colors did not dull or fade on this one. And that was a pleasing factor about this.

Even when it comes to sound, this 4K Smart LED TV doesn’t disappoint. The sound is sufficiently loud and sounds crisp up to 75-80% of volume. Anything above that can cause distortion. Still, it’s good enough for normal usage, but if you absolutely have to have the best sound, you should probably get a soundbar.

And of course, there’s a TV remote inside the box. And what’s interesting is that Yasuda had also included two AA batteries for the remote. The remote is a pretty basic one, nothing out of the ordinary. There’s nothing special worth mentioning, no mics either. So, no voice commands here.

Generally, televisions with big displays and 4K resolution are quite expensive. But segregating from the crowd, Yasuda provides some decent offerings in this 55-inch 4K Smart LED TV at a very affordable price. That’s really noteworthy. But like most of the affordable televisions, there are some compromises on this television.

The Wi-Fi connectivity could have been better and there is also a room for an improvement in the remote functionalities (voice assistant, hassle-free typing, etc.) and in the audio department. With such kind of infirmities, this TV surely is not the best 55-inch 4K smart LED TV out there. But considering its price and giving attention to all of its offerings, I found this TV as a compelling option to consider. And I can certainly recommend it to those looking to buy a big 4K TV.