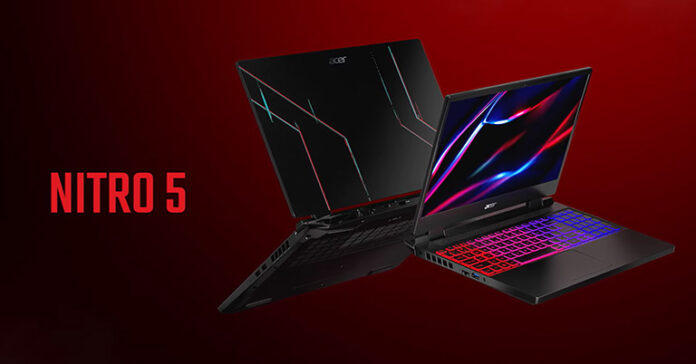 Acer Nitro 5 is incredibly popular among budget gamers in Nepal. And during CES 2022, the company unveiled the latest iteration of the laptop. Like its previous iterations, Nitro 5 is available in both Intel and AMD options. In this article, we will be discussing the official specs, key features, expected price, and availability of Acer Nitro 5 (2022) in Nepal.

Acer has finally breathed some fresh air into the design of this year’s Nitro 5 gaming laptop. The sharp angular edges of the top are now gone while the lid has new red and blue accent lines.

Like last year, the laptop will be available in two display sizes: 17.3 and 15.6″. Here, you can choose between a 144Hz FHD screen or go all the way up to a 165Hz QHD panel. Some higher-end models will even have 100% sRGB coverage.

As for performance, Acer is offering this laptop with the latest mobile CPUs from both Intel and AMD. The Intel variant starts at Core i5 and goes all the way up to Core i7-12700H. On the other hand, you will find AMD versions with Ryzen 5 6600H at the lower-end and Ryzen 7 6800H at the higher end.

On the GPU front, Acer Nitro 5 (2022) is configurable with up to RTX 3070 Ti. Similarly, it has two SO-DIMM slots that can take up to 32GB of RAM. However, it’s important to note that the Intel variant will only support DDR4 memory while there will also be a DDR5 option in the AMD version.

As for cooling, there’s the usual dual-fan setup onboard. But this time, Acer has added air-intake grilles on top of the keyboard deck as well. Thus, cool air can enter from both top and bottom of the laptop. Similarly, users can adjust the cooling power and fan speed via the NitroSense app. It even supports overclocking the CPU and GPU.

Fueling the laptop is a 56Wh battery, and Acer will be shipping it with either a 180W or a 230W power adapter. In terms of ports, you get two USB-A, one Thunderbolt 4, one HDMI, one RJ45, and one audio combo jack. The AMD variant replaces the Thunderbolt 4 with a USB 4 port, by the way. Moreover, some of the ports have been moved to the rear this time.