CES 2020 is upon us, ladies and gentlemen. And we’re getting to see so many new and exciting innovations this year, like the year before (you know the drill). Last year, Dell’s Alienware revealed the coveted “Area-51m” laptop with some serious power and more importantly, upgradability. Being able to replace the CPU and even the GPU (though of a non-traditional form factor) was something the world had yet to witness in a laptop but regardless was ready for. Well, Alienware has done it again – not release a similar laptop I mean, but the company has wowed us once more. Though it’s only a prototype at this point, the Alienware Concept UFO looks to make PC gaming more portable than ever with its design language similar to that of the Nintendo Switch.

Before going deeper into the rabbit hole, let me make something perfectly clear. There have been similar (and I mean that in every sense of the word) products in the past but were far from being as practical as the Concept UFO hopes to be. The Razer Edge Pro and NVIDIA SHIELD K1 looked to make PC gaming portable with their sleeker and tablet-like form factor but ultimately failed to do so.

The Alienware Concept UFO on the other hand, from the early looks of it, feels promising to say the least. Unquestionably borrowing the design from the Nintendo Switch, this device runs on Windows 10. Woah, that idea in itself sounds otherworldly and maybe that’s why the company’s calling it “Concept UFO”. I kid of course.

While enthusiastic developers have worked to the bone to get Android and Windows running on the Switch (with some succeeding even), the Concept UFO changes the game altogether. Alienware looks to completely disturb the handheld gaming arena as it is, while additionally capitalizing on the limitations of the Nintendo Switch as well.

What does it pack?

The only thing we know about the Concept UFO regarding its specifications at this point is that it has an 8-inch Full-HD (1920 x 1200 pixels) touchscreen display, runs Windows 10, comes with two magnetically latched controllers, and weighs about 900 grams. Moreover, there’s also a controller hub where you can place the controllers to compositely use it as a… regular controller!

And like the Nintendo Switch, you can also plug it into an external display source via a Type-C connector. There’s also a 3.5mm headphone jack and additionally, you can also rest the Concept UFO into a surface with its wide kickstand. On the back, there’s a honeycomb styled air vent.

More than a portable gaming machine

The Alienware Concept UFO is more than just a handheld PC gaming device (which is pretty impressive on its own if I haven’t mentioned that earlier). It has an 8-inch touchscreen display which means it’s a full-fledged tablet as well. Connect a keyboard and a mouse wirelessly and boom, now you can get to work on the go. To put it simply, it’s a small Windows tablet; there you go. 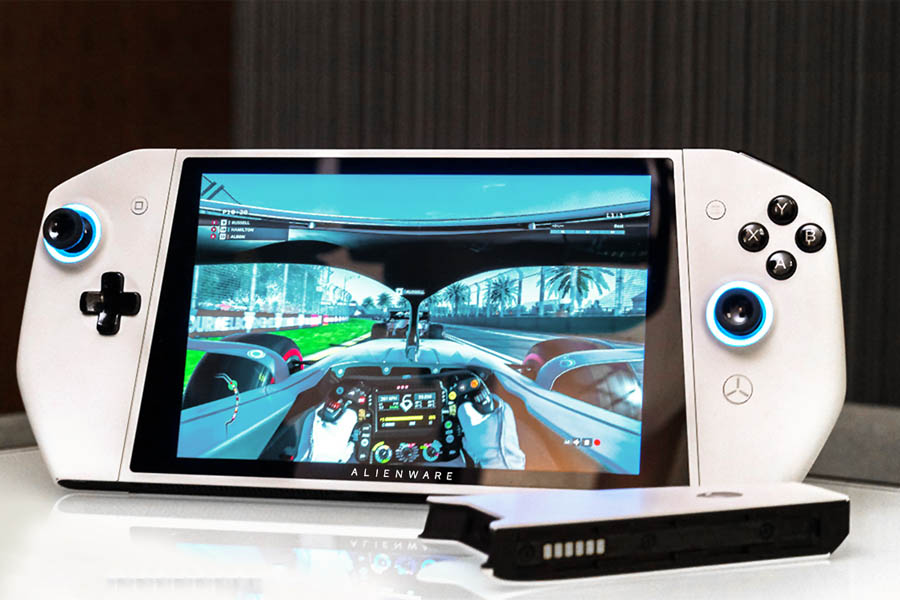 With some international techies getting their hand-on on the Alienware Concept UFO, what we can derive is that it is a damn promising device. The games run smooth and the device is easy to hold on to as well. But of course, there will be some compromises in bringing a PC gaming experience on such a small form factor. First and foremost, it runs loud (maybe distractingly loud even). And there’s the question about battery. How long will it last?

Let me pull out from the bottomless freefall of these hordes of questions and once again remind you that the Alienware Concept UFO is just a prototype at this point. We don’t know when and if it’s going to come out, what will it cost, nothing. This thing’s not even in its beta stage as of now. If the company does decide to greenlight the project into commercial production, what’s clear is that there are a lot of things to work upon beforehand.