If you own an Apple or a Samsung watch, what’s something you wished was better? For me, it definitely has to be the battery life. We recently stumbled upon the Amazfit GTR 3, which boasts an excellent battery. With a price tag of around $180 and quite an impressive spec sheet, it does seem like a cheaper, viable alternative to other costlier smartwatches out there. But is it really? Let’s find out in our review of Amazfit GTR 3. On a side note, we also tested the Amazfit GTS 3, which we will also be discussing in this review. It offers almost the same specs as the GTR 3 but in different form factors.

Starting off with the design, well, I think it looks pretty generic. I have the Amazfit GTR 3 in Black, while it’s available on a Grey finish too. Whichever option you go for, the watch comes with a 22mm universal strap buckle—meaning if you don’t feel the default strap options are up to your wheelhouse, you can always buy a third-party strap that matches your style. 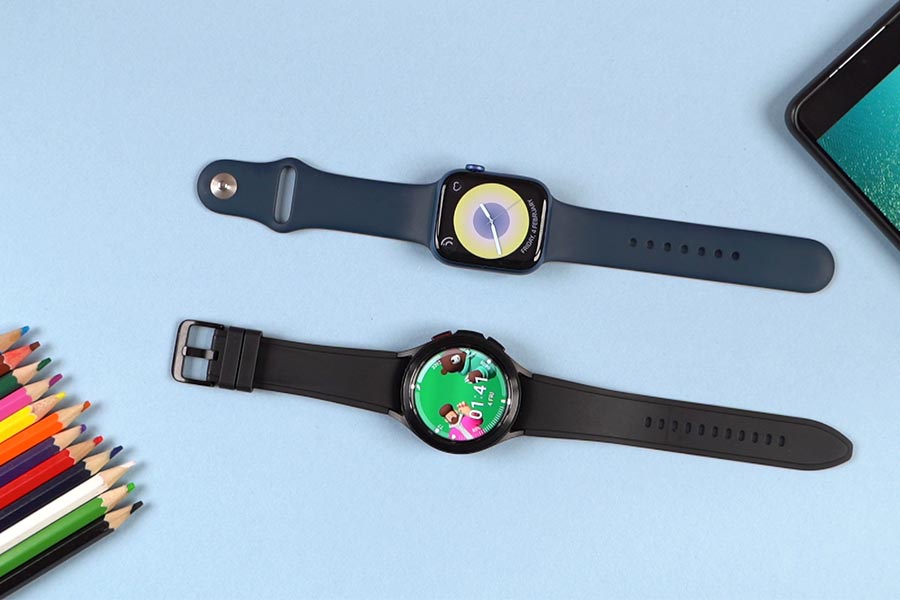 Regardless, the default silicone straps feel comfortable, and thanks to its lightweight aluminum build quality, wearing this watch all day hasn’t been problematic for me in any way. On the back, protruding slightly is the BioTracker PPG 3.0 sensor whereas you get two buttons—a rotating crown and an extra button on the right—for navigation and easy access to apps. The crown lets you scroll through options, open up the app list, and also acts as the Home button. You can also customize it to trigger a certain function by long-pressing it. In my case, I have set it to summoning the offline voice assistant. Likewise, the button down below brings out the exercise menu by default, but you can customize it to launch whatever function you please as well.

By the way, if you prefer a squarish form factor, you can get the Amazfit GTS 3 instead. ‘S’ for squarish, ‘R’ for round—that’s how I distinguish these two smartwatch lineups. Their specs are pretty similar and offer near-identical functions for the same price tag. Because I prefer this classy circular look, I chose the GTR 3.

Okay, the display side of things is where I have a lot of praise for the GTR 3. It features a 1.39- inch AMOLED screen with 336 PPI and a resolution of 454 x 454 pixels. And let me just tell you, this is an amazing display to look at and interact with.

The screen’s AMOLED nature means you’re getting deep blacks and amazing contrast. Now, although its bezels are not the slimmest, when you set a dark-themed wallpaper here, the bezels seem almost non-existent. Goes on to show how good the contrast on this thing is! Plus, with 1000 nits of peak brightness, this smartwatch is bright enough even for the sunniest or brightest of ambient conditions.

Similarly, I haven’t faced any touch responsiveness issues on the Amazfit GTR 3 either. The animations while navigating the watch did feel a tad bit slow initially, but everything now runs pretty smooth thanks to a recent update.

The only thing that this screen misses is some form of display protection. Since it does not have a physical bezel towering over the screen like Samsung’s Galaxy Watch 4 Classic, it’s more likely to get scratches when striking solid surfaces.

Let’s now talk about the health and fitness-tracking abilities of the GTR 3. For the most part, it’s got everything you’d expect ranging from heart rate monitoring to SpO2 monitoring, sleep tracking, step and calorie counting, etc.

Having said that, there’s no skin temperature monitoring here, which is a little disappointing. The Huawei Watch GT 3 that I used before had this feature and you can even get it on cheaper devices—although I can’t speak of their accuracy with much confidence. Regardless, I think that feature comes in handy during these COVID times.

I found its pedometer and heart rate sensor to be pretty accurate though. Also, the GTR 3’s sleep tracking is incredibly accurate. It recorded the time I went to sleep and the time I got up quite precisely and I’m really impressed with that.

Another feature I’m incredibly fond of here is something called “One-time Measurement” that takes around 45 seconds to complete but covers your heart rate, stress, SpO2, and breathing rate in one take—so that you don’t have to record them individually for a given moment.

Readings can get inaccurate at times

However, I have to tell you that I’ve encountered some inaccuracies with SpO2 monitoring on the Amazfit GTR 3 and GTS 3 during the review period. On a few occasions, it showed really low SpO2 readings which scared me a lot. So to cross-check, I used an oximeter which gave a 98% SpO2 reading instead. This has happened only 2-3 times with me, but I just thought you guys should know that.

The watch also brings a PAI score which is calculated based on the physical intensity of activities. The more cardiorespiratory exercises you do, the more your weekly PAI score is. As you can see, my PAI score is really low, meaning my exercises aren’t as physically strenuous as they should be.

Alright, in terms of fitness, the GTR 3 does not disappoint though. You get more than 150 exercise modes here, including the basic ones like indoor/outdoor running, walking, cycling, and swimming, to hula hooping, skiing, frisbee, kite flying, etc.

Now, I am not so much of a fitness freak, but I do go for a run every now and then. During those times, I would turn on the built-in GPS on the watch that works really great, by the way. You can also adjust the accuracy of the navigation system to prolong battery backup via the settings. But do note that it takes some time to lock the GPS signal when initially turning it on.

On a related note, the automatic workout detection feature leaves little to complain about as well. It’s not as good as what I have experienced with the Galaxy Watch 4, but it’s not that bad either. As I mentioned earlier, I go for outdoor runs often and this watch would recognize it after 5-6 minutes into the workout.

Moving on, the GTR 3 runs on Zepp OS which is Amazfit’s proprietary operating system for its smartwatches. Likewise, all your workout and health-related data syncs with the Zepp app, which is available on both Android and iOS platforms. While the app itself is not the most intuitive, I’d say it gets the job done. It is very simple to use which is something I appreciate.

Having said that, just like the Huawei Watch GT 3, you don’t get a lot of third-party app support here. There are a few options for different apps but personally, I don’t find them that useful. Anyway, it has a pretty decent selection of watch faces though and I am totally obsessed with this cat watch face, because, well, I am obsessed with cats.

More on the app, I haven’t had the most bug-free experience with it. For instance, notifications don’t appear instantaneously most of the time and I had to check my phone instead, which defeats the primary purpose of having notifications pop up on your watch in the first place. And of course, the notifications aren’t actionable either, and all you can do is view and delete them.

Also, the GTR 3 has a built-in microphone, but since it’s not complemented by a speaker, you cannot make or receive calls here—although it does support call notifications. The Amazfit GTR 3 Pro, which is a slightly more expensive version of this watch, can indeed make/receive calls. So if that is important to you, I’d suggest you go for the “Pro” version instead.

One incredibly annoying—and possibly a deal-breaking—bug I’ve had with the GTR 3 is that it would just shut down and restart on its own for no reason. This has been happening from the day I started using it and even after 2 updates I’ve received so far, the issue is still not fixed. Hopefully, Amazfit will look into this ASAP!

On the other hand, the watch comes with Amazon Alexa as well as offline voice assistant support. As a result, you can give voice commands like “start workout”, “brightness up”—for hands-free control.

This feature is not an absolute necessity, but it does make operating the watch a little simpler. Plus, it’s pretty fun to use as well! Finally, something that the GTR 3 utterly nails is the battery life.

Amazfit promises a whopping 21 days of backup—whereas I managed to get around 12 days of endurance when keeping all the assorted health functions on, the brightness level to 50%, and using a live watch face.

Considering how all these elements are highly battery-consuming, this is a holy grail for someone who does not like charging their watch every other day. However, do note that if you choose to get the GTS 3, it doesn’t have as good battery life as this one since it features a smaller battery.

For charging, you get a magnetic one inside the box which fills up the watch from 0-100% in about 2 hours.

Summarizing my experience with the Amazfit GTR 3, well it has been bitter-sweet. On one hand, I really appreciate its battery life, the amazing display—whereas it is competent with the health and fitness-related stuff with great accuracy. But at the same time, the persistent software bugs have made my experience somewhat bitter.

However, the few software-related issues I discussed earlier are something that can be fixed with updates, so I wouldn’t worry about it too much. Overall, the Amazfit GTR 3 does everything a good smartwatch should do. And looking at its relatively cheaper price tag, this sure seems like a worthy option against the more expensive alternatives.

If you prefer square dials, Amazfit GTS 3 has almost the same experience but with less impressive battery life.