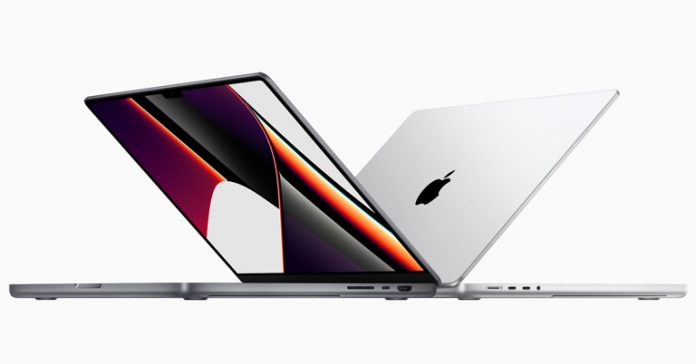 Apple concluded its October “Unleased” event, introducing a couple of new products—including the new 14 and 16-inch MacBook Pros. And they’re now available in Nepal. Here, we will be looking at the specs, features, official price, and availability of the new Apple MacBook Pro 14″ in Nepal.

To note, this is the first time that Apple is offering a 14-inch MacBook Pro. It is 15.5mm thick and weighs 3.5 pounds. Apple says the aluminum used in the chassis is 100% recycled.

Here, you get a 14.2-inch Liquid Retina XDR display. With the help of mini-LED backlights, it can attain maximum brightness of up to 1600 nits. There is a tiny bathtub-like notch upfront that contributes to the smaller bezels all around. This display even supports 120Hz ProMotion that dynamically adjusts the refresh rate based on the content on the screen. Moreover, Apple has packed a total of 5.9 million pixels on this 14.2-inch screen, which is higher than the last-gen 16-inch MacBook Pro. Also, Apple has replaced the Touch Bar from the 13-inch MacBook Pro with physical Function keys and a wider Escape key instead.

Over on the performance front, you get to choose between the new M1 Pro and M1 Max chips. These are the second-gen in-house silicon from Apple for its MacBook lineup. The M1 Pro features double the transistors compared to last year’s M1 chip. Likewise, it features a faster 8 – 10-core CPU and 14 – 16-core GPU.

Moreover, it maxes out at 32GB of unified memory with a memory bandwidth of up to 200GB/s. The CPU and GPU performances have been improved by 70% and 100% over the M1 as well. On the other hand, the M1 Max doubles those numbers to 64GB and 400GB/s, respectively.

It also features up to 24 – 32-core GPU and up to 4096 execution units, alongside a 10-core CPU. The new 14/16-inch MacBook Pro comes with up to two active fans. With the improved design, they have 50% better airflow even at lower fan speed.

Moving on, Apple has designed the new version of macOS to make the most of the new chips. macOS Monterey brings plenty of new features like FaceTime, AirPlay, Live Text, and Visual Lookup. Similarly, all Mac apps run natively on the M1 Pro/Max-powered MacBooks.

In addition, there are over 10,000 universal apps and plug-ins. Similarly, all the other apps based on Intel’s x86 architecture will run with the help of Apple’s Rosetta 2 translator.

The webcam also sees some improvement this time. Apple has upped the resolution to 1080p, while also using a superior sensor with a wide aperture. For audio, there’s a six-speaker sound system consisting of 2 tweeters and 4 force-canceling woofers. It supports Spatial Audio and Dolby Atmos playback.

Getting to the battery, the new 14-inch MacBook Pro boasts up to 17 hours of backup. You also get fast charging support which is another first for the lineup. According to the company, you can charge the new MacBook Pro up to 50% in just 30 minutes. Moreover, Apple has also brought back the MagSafe charger on these MacBooks.

As for ports, you get three Thunderbolt 4/USB-C, an HDMI, an SD card slot, and a 3.5mm jack. The latter even supports high-impedance headphones.