With the wave of Intel 10th-gen Comet Lake-H and AMD Ryzen 4000 series mobile processor-powered laptops hitting the market, now is the optimal time to swoop into the hits of last year. So, in this article, we’ll be listing out the best budget gaming laptops you can buy right now, which will cost somewhere under INR 60000 in India or Rs. 1 lakh in Nepal. In the process of making this list, we’ve also considered upgradeability in case you want to further strengthen your system with more RAM or storage in the future. With that out of the way, let’s begin.

At number 5 on our list is the MSI GF63. What we like about this laptop is its thin-and-light build. It also has a stark black-and-red accent going all around the body of the device. The keyboard has single-color red keys with full-sized arrow keys, giving off an aggressive gaming vibe.

Although the build material used here is plastic, MSI has brushed off the lid and keyboard with aluminum, therefore it looks more premium than what it is. Its display also has substantially thin bezels on the side, though the quality of the panel is just about average; it only covers about 50% of the sRGB color gamut. 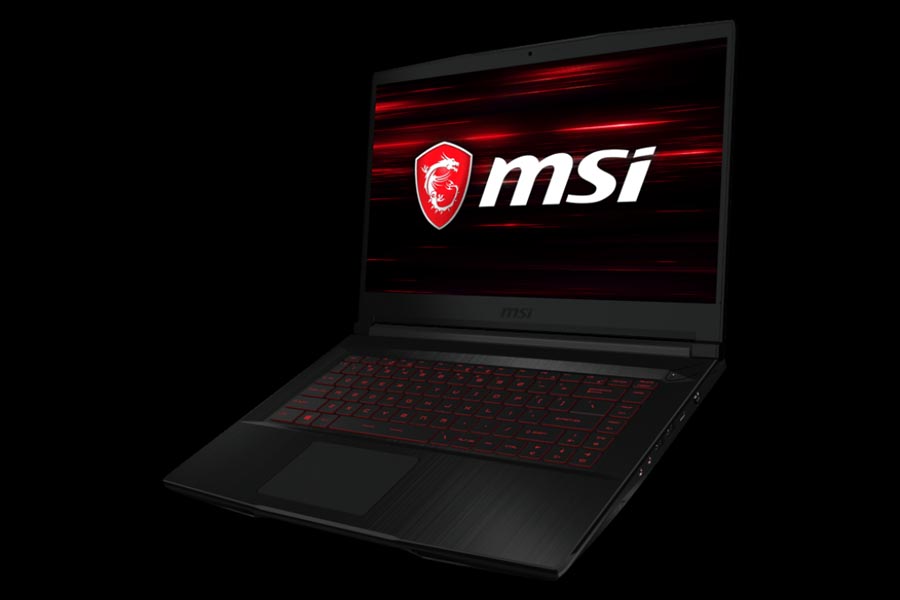 But, that’s the limitation with almost all the budget gaming laptop. So, if you are also a content creator, my suggestion is, invest a little bit more and get midrange gaming laptops like the MSI GL63, Acer Helios 300, or the HP Omen 15 which offers around 100% of sRGB color gamut.

Getting to the performance, you get a standard i5-9300H quad-core processor with 45W TDP and a max turbo frequency of 4.1GHz. The reason it is at the bottom of our list is that you get a slightly inferior NVIDIA’s GTX 1650 Max-Q, and not the regular GTX 1650 we usually see in this price range.

Moreover, it has only 3 heat pipes and a single fan, which is a major red flag for gamers since this can result in thermal throttling over longer gaming sessions. Though the comparatively underclocked 1650 Max-Q helps a bit, we can’t help but feel let down by the design choice. In terms of memory, the MSI GF63 ships with 8GB of RAM and 512GB SSD.

But the good thing is there is a vacant RAM slot as well as a 2.5-inch bay for HDD for future upgrades. Battery life is another area of concern since this laptop has a small 51Whr cell and on my test, it lasts for around 3-4 hours if you are using chrome.

With the Pavilion 15, HP has literally gone green in terms of the color scheme of the device. Though it costs slightly over 60000, it’s overall build quality persuaded us to include it in our list of best budget gaming laptops in India. From its rubber feet to the logo at the back, to the keyboard lighting, the HP Pavilion 15 Power with its “Acid Green” theme is one unique-looking device. The lid opens up, revealing an uneven square at the bottom, thus giving off a little high-end gaming aesthetics to it. You also get a full-sized keyboard with green backlighting, which has an added depth of accent to it.

But like the MSI GF63, the color accuracy and brightness levels on this one is also pretty average. On the CPU end, you can either have Intel Core i5 9th–gen 9300H or the AMD’s Ryzen 5 3000 series. However, we would advise you to go with Intel counterpart as it outclasses the 3rd–gen AMD CPU by quite a margin.

On the gaming front, you get a GTX 1650 with 4GB of GDDR5 memory. Hence, the HP Pavilion 15 Power can smoothly run most graphically-intensive games in medium settings at playable fps but you’ll have to play around with the settings a little more to get higher fps in resource-hungry games like Battlefield V, Apex legends, etc. 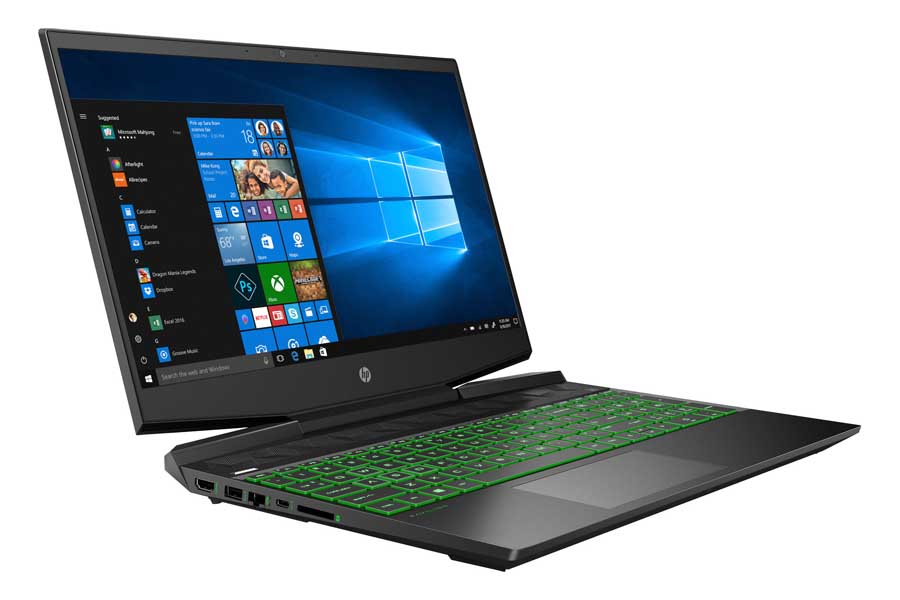 It shares a similar configuration and upgradability in terms of memory to the MSI GF63 we talked about before – and an ever-so-slightly larger 52Whr battery. Another thing that’s a little exciting about this laptop is the audio. Tuned by Bang & Olufsen, its dual stereo speakers give a clean and immersive listening experience.

Number third in our list is the Lenovo Ideapad L340. To begin with, this one doesn’t look like a gaming laptop and has a clean design. And Like how two laptops above in the list had a red and green accent to them, the Lenovo Ideapad L340 has a subtle blue accent in the keyboard and looks much cleaner. Hence, this is a laptop you could technically take to meetings or presentations, without feeling awkward. 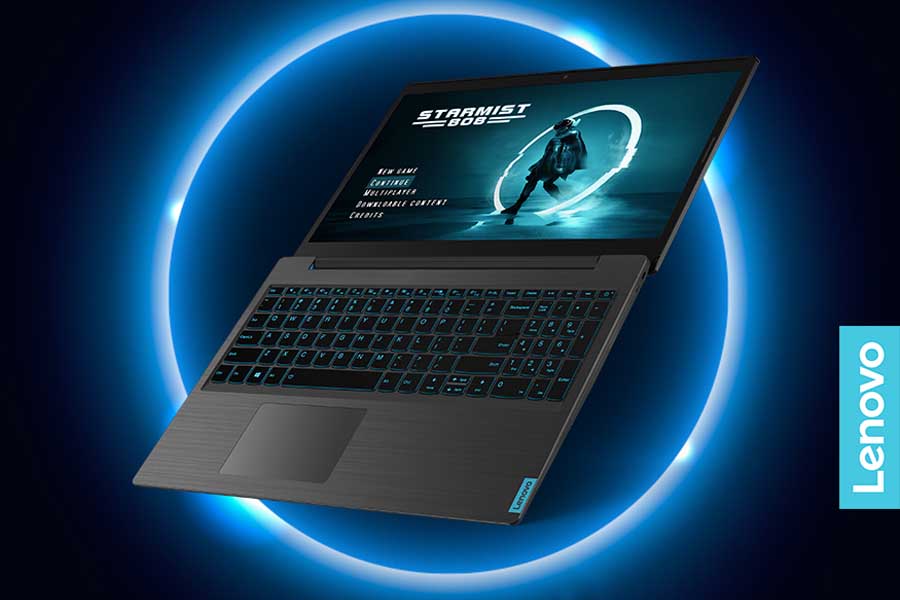 The Lenovo Ideapad L340’s display also has slightly better colors with around 65% sRGB color coverage. The viewing experience is quite nice as well, thanks to its minimal side bezels. There is a webcam on top with privacy in mind. It has a physical shutter for turning it off anytime you like.

And as far as performance goes, it features the same 9th-gen Intel Core i5-9300H processor and NVIDIA’s GTX 1650 with 4GB of GDDR5 video memory. Thermals are well-handled by its two heat pipes and two fans. The only thing to dislike about the L340 is, it only has a single RAM slot which means you cannot upgrade RAM sticks to make it dual-channel. More disappointingly, in some regions, the laptop ships with soldered memory.

However, it does have a dual-drive configuration with 128GB SSD and 1TB SDD and hence you can upgrade both of them. You’d also want to keep the power adapter by you all the time as the laptop has a pretty small 3 cell 45Whr battery.

Short for “The Ultimate Force”, the TUF series of gaming laptops from ASUS is its budget lineup, contrary to the expensive “ROG” series. The Asus TUF FX505 series has a lot of variants, but the one you should get is the FX505GT. It comes with the Intel Core i5 9300H processor, alongside GTX 1650 GPU with 4GB of GDDR5 VRAM. Admittedly, it is a little more than INR 60000 compared to ones with a Ryzen CPU & similar specs. But we believe the extra buck is absolutely worth it.

You’d think the FX505GT would perform similarly to other laptops in this list with similar specs, but you’d be surprised. The thing is, it has a far better cooling & anti-dust system compared to them. And unlike other laptops in this list, you get a dedicated button to toggle between the three modes of performance: silent, balanced, and turbo. Here, the latter yields maximum performance at the expense of fan noise.

A great scope for memory upgradeability

Upgradability is also pretty good here as it comes with 2 SO-DIMM socket for RAM and has a dual-storage config with a SATA drive and an M.2 slot. But generally, you will find the device with 8GB RAM in single-channel and a 512GB SSD. Design-wise, it has an all-plastic body with an ‘X’ design lid from the edges giving the device a bold look. 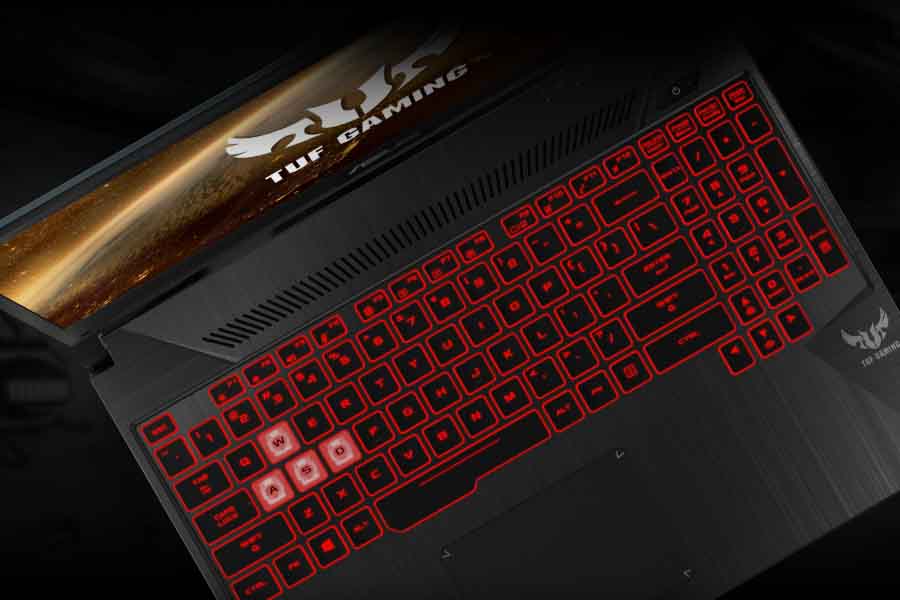 It is also “MIL-STD-810G” certified, meaning that the laptop has been tested against environmental extremities like high altitude, solar radiation, etc. The display is equally immersive with a 15.6” FHD IPS panel having minimal side bezels, although my unit only has 45% NTSC color coverage. Similarly, the FX505GT has a full-size keyboard with all-zone lighting instead of per-key, with the highlighted WASD keys. The 48Whr battery is pretty small as the others in the list, and we were able to get about 4 to 5 hours of usage under “silent” mode.

Finally, our top pick for the best budget gaming laptops under INR 60000 in India goes to the Acer Nitro 5 (2019). While its previous 2018 version suffered from heating troubles, the 2019 Acer Nitro 5 has presented itself as a capable gaming machine on a budget. The first thing to like about this device is its sturdy build quality and simplistically effective design. 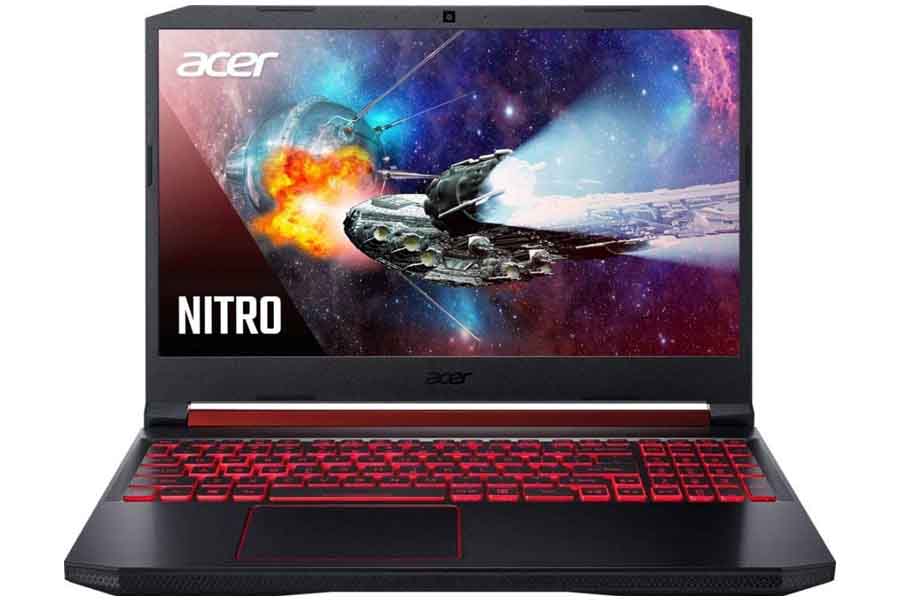 It gives off a gaming aesthetic with a black-and-red accent imbued throughout the laptop along with the red backlit keyboard. Talking about the display, it’s pretty standard as the previous laptops in this list. It has a 15.6-inch FHD IPS panel with a regular 60Hz refresh rate and a pretty average 60% sRGB color gamut coverage. The keyboard is a full-sized one, with a special highlight on WASD and arrow keys.

The processor on this laptop is the Intel Core i5-9300H, paired with 8GB of RAM and NVIDIA GTX 1650 GPU. While it is a pretty competent setup, you can further manipulate it into your liking using Acer’s “Nitro Sense” software. The Nitro 5 also comes with a fairly large 57Whr battery, which can give you anywhere between 5 and 6 hours of endurance on normal usage.

Storage is where it gets interesting as this laptop features a SATA hard drive, alongside two M.2 NVMe slots. On purchase, you get 256GB of SSD along with 1TB HDD, but in the future, you can always upgrade the storage via its unused M.2 slot.