Call a bunch of friends, grab some snacks, sit somewhere comfortably and watch your favorite show or a movie on a big screen of a projector. Who doesn’t want that? But since projectors are usually expensive, this dream does not come true for everyone. So we went through the internet, browse through a couple of websites and got Blitzwolf BW-VP1 on our RADAR. The projector was available at Banggood.com for just $86. And at that price, the projector is offering quite a lot. But how good are its features? Well, let’s find out in this Blitzwolf BW-VP1 review.

When it comes to design, this one doesn’t have anything out of ordinary. It looks similar to most of the projectors in the market. But where it differs is, in terms of portability. The projector is just 7cm thick and merely weighs 1.1Kgs. So, it easily fits in your bags and traveling with it is quite hassle-free.

The projector has a lens on the front, which comes covered with a lens cap. The front face of the projector also includes an IR receiver and Blitzwolf branding right beneath it. A small part on the top features mirror-finished surface, which comes with control buttons on it. But since you also get a remote control with it, you may not use those control buttons that often. There are also two knobs on the top of the lens: one of them lets the user adjust the keystone whereas the other one is to adjust the focus. Similarly, you get all the connectivity ports on the right. There’s also a grill alongside, which provides active cooling for the projector. 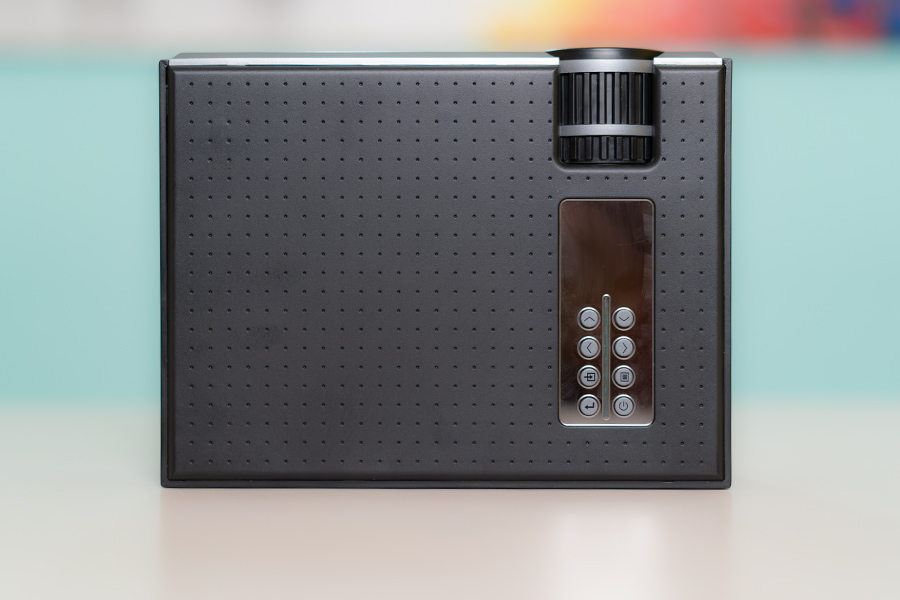 Just if you are wondering, there is a power jack, speaker, and another IR receiver on the back. Since it’s a light projector, you can also mount it on a tripod. And for that, you get a dedicated hole on the bottom. Alongside that, you get another hole for adjusting screw with which you can adjust angles on the projector screen. As for the connectivity, there is a VGA port, an HDMI port, a USB port, an AV port, and 3.5mm audio output. Making use of the VGA or HDMI port, you can connect this projector with your PC and use it as a big monitor. Using HDMI cable, you can also connect the gaming consoles like PlayStation and Xbox and Play games on it. This projector can also be used as a TV alternative. Just connect your set-top box to the projector with an HDMI cable and voila, you can watch TV contents on it.

In addition to that, there is a USB-Type-A port. So plugging in your Thumb Drive or even your smartphone with an OTG cable, you can showcase your media contents on-the-go.

However, the projector only reads text files and not the Microsoft word and powerpoint files. So you still need to carry your laptop for the presentations, which is a bummer.

But on the side note, you can still play songs, movies and photos, which I guess is a feature to cherish.

Now let’s talk about the technical features. The Blitzwolf BW-VP1 is a long-throw projector, whose projection size can be varied from 28-inch to 100-inch by varying the projection distance from 1m-3m. So it can be handy in a wide variety of situations.

The projector uses an LCD panel with an LED lamp of 75-watts. So unlike most of the DLP projectors, it won’t have a color ghosting effect. Lamps on DLP projectors also don’t last so long as they usually have a lamp life of 2000-5000 hours.

However, this projector has a lamp life of 50,000 hours. So even if you regularly use this projector for 10 hours on a daily basis, it would still last for over 13 years. Pretty impressive, right? But what got be quite unsatisfied was its resolution. It has a native resolution of 720p with support for Full-HD content. Since most of the projectors these days usually come with Full-HD and 4K resolution, it cannot match them in terms of sharpness. And while casting big images on the screen, you might even find some pixelation.

But as it’s a budget projector, such tradeoffs are usually inevitable. However, what can you do is, maintain a proper distance while watching content on it.

If the viewing distance is equal or more than the Retina distance, you won’t notice any sort of pixelation and the picture looks seamless.

When it comes to colors, I found the projector rather impressive. Although the projector isn’t HDR enabled, colors were close to natural. But you need to use it in dark rooms to notice it since the brightness of the lamp is just 1800 lumens. So make sure you pull the curtains before watching the movies or starting a presentation. But since it has a low contrast ratio, it may not help always. Sometimes, dark contents still get subdued. So there is that!

As for the audio, you get a 4-watt speaker system inbuilt inside the projector. Running it on full volume, the audio output is usually sufficient for a small group of people. However, at higher volumes, the audio usually distorts.

The cooling fans also make some noise, which is highly noticeable while playing content on low volumes. So, if you want to subdue the noise level and enhance the audio quality, you should get a separate speaker system, which produces loud and rich audio output.

Also Read: Projector Buying Guide 101: All the things to consider while buying a projector

The Blitzwolf BW-VP1 projector surely isn’t the best projector you can get in the market. It comes with low resolution, doesn’t have much brightness and contrast ratio, and audio quality is also nothing great to talk about. But even with those tradeoffs, I find it value-packed. 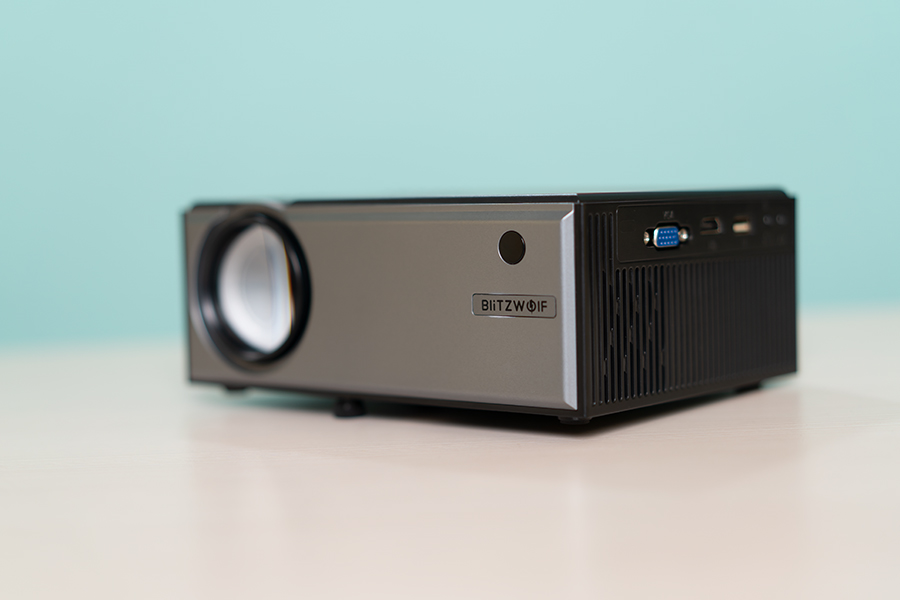 Because of such tradeoffs, it may not be usable in the home theatre system. But for casual use and for school and office presentations, it would still be sufficient for most. So weighing the features on the device and its cost, I still consider it to be one of the best projectors under $100.