Brands these days try to pack in as many features in their smartphones as possible in a bid to outshine the competition. As a result, smartphones have grown both in size and weight. Enter, Carbon 1 MK II. It is the first commercial phone from Carbon which is a Germany-based company (not to be confused with Karbonn, the Indian smartphone manufacturer). The brand is tackling the problem of growing smartphone weight by promoting the use of carbon fiber for the phone’s build. In this post, we will be taking a look at Carbon 1 MK II and the innovative technology that makes it the first of its kind. 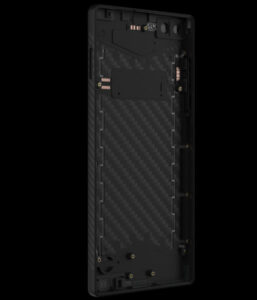 Here, the Carbon 1 Mk II is the world’s first carbon fiber monocoque smartphone. Monocoque is a French word that translates to “single shell”. This design takes inspiration from eggs where all the support comes from the outer shell. This approach is complicated to pull off, but it results in an extremely lightweight body. Thus, it is mainly reserved for race cars and aircraft.

The monocoque design on the Carbon 1 MK II means that all the support comes from the external structural skin. Contrary to mainstream phones with a unibody design, MK II doesn’t have internal frames. The result is an extremely light miniature design. The phone weighs just 125g which the company claims to be lighter than 33% of the phone. Similarly, the phone is just 6.3mm thick compared to the average thickness of 8.3mm in today’s smartphones.

Another advantage of using carbon is that reduces the use of plastic and thus is more environment-friendly. According to the company, this phone uses less than 5% plastic for its construction. And the lightweight design means that less CO2 is emitted for transportation and delivery. Carbon has also worked on the reparability of the phone. It says that the near-modular monocoque design of the MK II makes it easy for users to repair in case of a part failure. 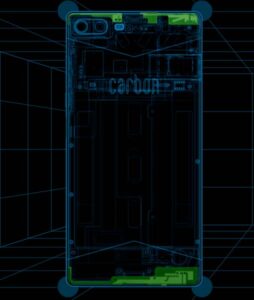 But why did it take so long for companies to switch to carbon fiber if it has all these benefits? Well, prior to this, carbon fiber was known to block radio frequencies resulting in bad network reception in smartphones. Carbon has solved this with the help of its HyRECM technology, which is a result of four years of research. The company has forged carbon fiber with complementary radio-enabled composites for better network reception.

Let’s quickly take a look at what features the Carbon 1 MK II offers as a smartphone. The phone sports a 6-inch AMOLED panel. The 2160 x 1080 resolution of the screen results in an 18:9 aspect ratio. There is a 0.4mm layer of Corning Gorilla Glass Victus for added protection. The thickness is the least of all the Victus Glass to date.

The phone is powered by MediaTek’s Helio P90 which is quite outdated by today’s standard. In Carbon’s defense, the phone is not supposed to be a beast performer. With the Carbon 1 MK II, you get 8GB of LPDDR4X RAM and 256GB of UFS 2.1 storage. You can expand the storage with an external microSD card but you will have to sacrifice the dual-SIM functionality for that. Talking about the camera, there are two at the back and one on the front. The dual-camera setup on the back consists of two 16MP sensors. Interestingly, the front camera uses a 20MP sensor.

Fueling the device is a 3,000mAh battery and the fast charging support means users can charge it up to 50% within 30 minutes. The phone ships with Android 10 but the company has promised two major software updates and monthly software updates. In terms of connectivity, the phone supports dual-4G, Wi-Fi 5, Bluetooth, and NFC. The phone has a USB-C 3.1 port but sadly there is no 3.5mm headphone jack.

Carbon 1 MK II is quite expensive as it comes with a price tag of 799 Euros which is a lot given the specs of the phone. However, it’s a first-of-its-kind and the lightweight monocoque build is super rare among smartphones. Interested buyers can pre-order the phone from the company’s official site. Delivery will start later this month. The phone will only be available in Germany and a couple of European countries including Austria, Switzerland, and more.